Donald Trump's appalling Asian vacation is finally over: Could it have been worse?

Trump burnishes the image of Philippine strongman Rodrigo Duterte and heads home, having made the world worse fast 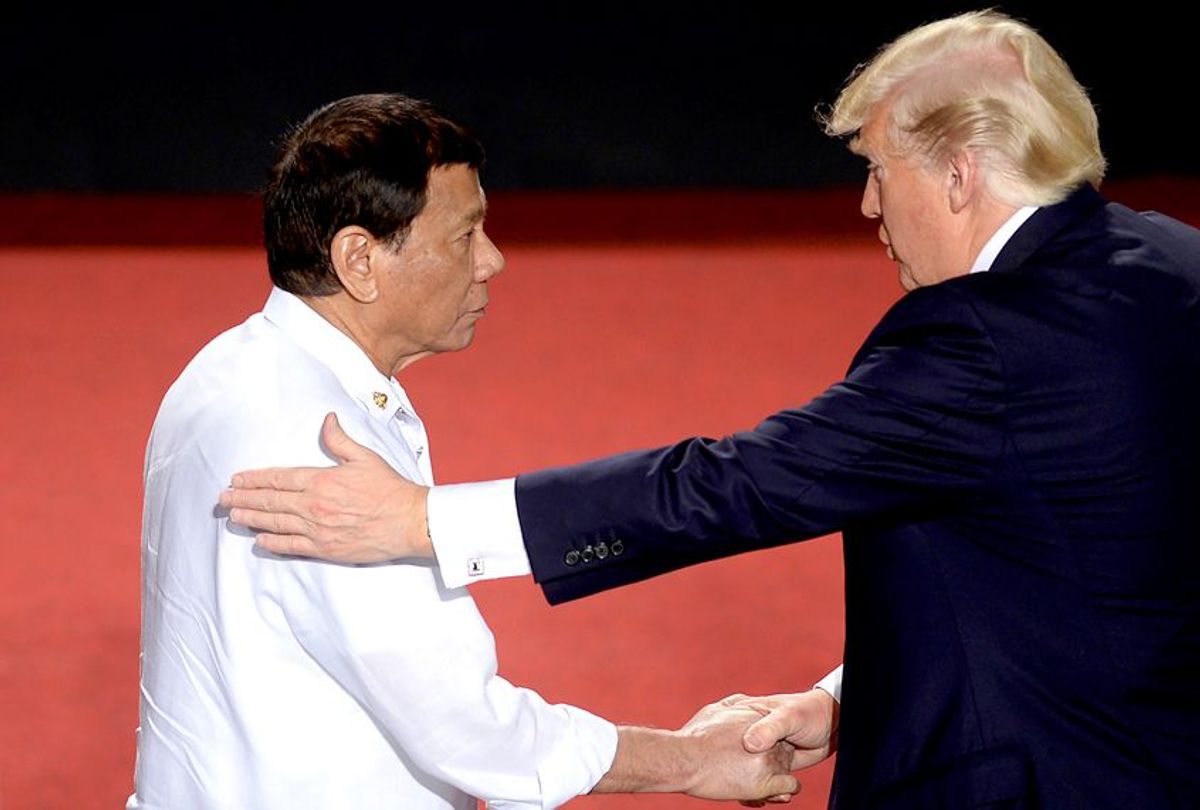 As President Donald Trump completes his excellent Asian adventure and heads back home, he's probably feeling a little bit of of a letdown. He's facing the usual political maelstrom, but this time it's not about him. Rather, it's about former judge Roy Moore, whom Trump enthusiastically endorsed the day after Moore won the Republican Senate primary in Alabama.

As virtually everyone knows by now, Moore has been credibly accused of stalking and assaulting underage girls when he was a prosecutor back in the 1970s. It's unclear what exactly Trump thinks about all this, since he's been on the road, but one can imagine him feeling jealous that his King of the World tour has been overshadowed by this scandal. On the other hand, he may have convinced himself that he's a genius for not having endorsed Moore in the first place, as if he knew he was a sexual predator with a Lolita complex all along.

Trump should be grateful that Moore has taken all the attention from his foreign trip. While the president may think it was a big success since all the leaders he met with rolled out the red carpet, the sad truth is that everyone in the world now knows that he's an easy mark. All that pageantry is a small price to pay to impress the fool who believes he's the world's greatest negotiator when he's actually a clueless sap. If the Republicans back home weren't so enmeshed in civil war, they could have figured out the same thing and enacted their dream agenda by now. Fortunately, they're almost as clueless as he is.

The whole trip was surreal from beginning to end, but the last leg in the Philippines, with sociopathic President Rodrigo Duterte, was downright hallucinogenic. You'll see what I mean if you watch this video of Duterte singing a love song at a gala on Sunday night, claiming he was doing so on the orders of the United States commander in chief:

I have no idea what that was about either. But that weirdness is probably why they call Duterte the "Trump of the East," a title that he apparently wears proudly.

On Monday, before their official meeting, Trump returned the compliment by saying he has a “great relationship” with Duterte and laughing when the Philippine president called the press a bunch of "spies." (Duterte has famously declared that journalists are "not exempted from assassination," something Trump no doubt thinks makes a lot of sense.)

According to Duterte's spokesman, "The relationship appears to be very warm and very friendly. They’ve been very candid in their dealings, and it’s very apparent that both of them have a person who they consider as not their best friend. They have similar feelings toward former U.S. President Barack Obama.” Duterte is still nursing a grudge at Obama for criticizing his extrajudicial killing spree last year, while Trump has been insulting all former U.S. presidents throughout this trip. He has told all of his gracious hosts that he holds his predecessors responsible for every problem in the world and doesn't blame these wonderful friends who shower him with flattery for anything they've done in the past. He admires them all as "strong" leaders who do the right thing by their country, unlike the lily-livered losers who were president of the United States before he came along.

Trump's hosts smile serenely and assure him that he too is very, very strong and very, very great.

Duterte said last week he would tell Trump to “lay off” if the latter tried to talk to him about human rights, and there was some disagreement about whether that came up in their talk. Press secretary Sarah Huckabee Sanders issued a statement claiming the issue was briefly discussed in relation to the drug war. Duterte's spokesman disputed that, saying, "There was no mention of human rights. There was no mention of extrajudicial killings. There was only a rather lengthy discussion about the Philippine war on drugs with President Duterte doing most of the explaining.” Trump has made it clear that he doesn't like to bring up unpleasant things to his strongman buddies -- he's very embarrassed having to ask his pal Vladimir about that election meddling thing -- so I tend to believe Duterte's team on this one.

Recall what Trump said in his April phone call to the Philippine president, when he complimented Duterte for doing an “unbelievable job on the drug problem . . . many countries have the problem, we have the problem, but what a great job you are doing and I just wanted to call and tell you that." When Duterte said that drugs were "the scourge" of his nation, Trump replied, “I understand that and fully understand that, and I think we had a previous president who did not understand that."

The drug war Duterte is waging against his own people may have claimed up to 12,000 lives, while thousands more languish in horrible conditions in prisons. Duterte himself is unstable and violent, admitting that he has personally committed murder. He has said, "Hitler massacred 3 million Jews. There are 3 million drug addicts. I'd be happy to slaughter them . . . You destroy my country, I kill you. It's a legitimate thing. If you destroy our young children, I will kill you. That is a very correct statement." That's the man President Donald Trump admires so much that he sat and listened to him "explain" his methods.

According to this Washington Post op-ed by Filipino journalist Manuel Quezon III, Trump did Duterte a big favor by honoring him and "burnishing his strongman image." Duterte has apparently been losing favor with the Filipino public and his "illiberal political agenda is running out of steam." The Catholic Church is rebelling, the economy is faltering and his government is in crisis. Trump's visit and his treatment of Duterte as an equal on the world stage, against the advice of regional experts, propped him up at just the right time.

Trump clearly believes his Asia trip was a huge success. And it was -- for autocrats and dictators throughout the region. They took their measure of our president, and he showed them what he was made of -- hot air. It's not that he isn't feared. Anyone can see that he is dangerous, because he is in charge of the world's most powerful military and economy, and he is childlike and unpredictable. All these leaders are certainly planning to protect themselves from the United States and to turn Donald Trump's ineptitude to their strategic advantage. The world is a more unstable place than it was 12 days ago.