Lead found in fidget spinners is no idle threat 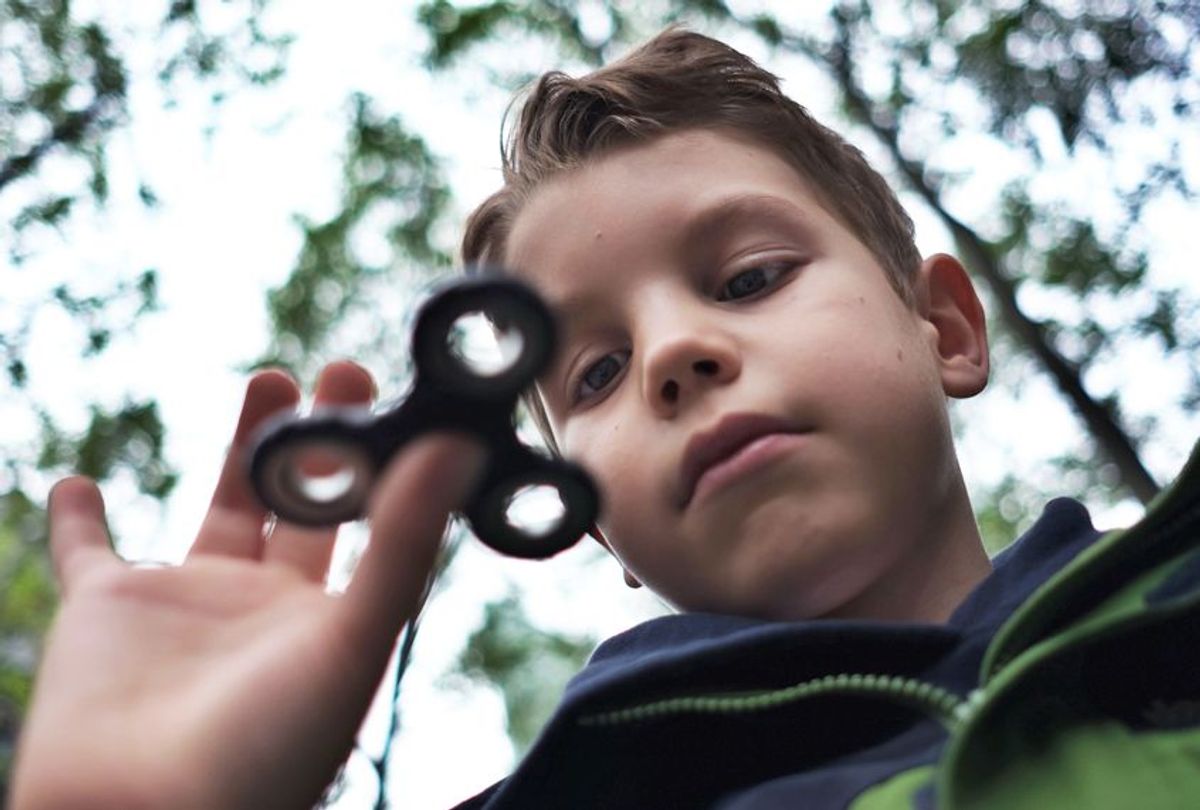 That fidget spinner your kid can’t put down? It turns out it may be putting children at risk for lead exposure.

That’s according to a report out Thursday from a consumer advocacy group, the U.S. Public Interest Research Group Education Fund.

The organization tested the toys — which represent the latest iteration of a long line of skill-based amusements that include yo-yos and spinning tops — for lead.

U.S. PIRG found the devices to have lead on their surface level and the layer immediately beneath.

Preventing lead exposure, especially for young children, is considered a public health imperative. It can impair brain development, especially in younger children, and have lifelong consequences.

Flint, Mich., for instance, made national headlines when lead was discovered in its public water system. The problem is also often associated with paint in old buildings.

Could a kid’s toy really be the next culprit?

Bulls i Toy, which makes the two models, said in a letter to U.S. PIRG that the spinners are marketed toward people 14 and up, and therefore exempt from federal regulations about lead in toys. Target, which sells them, has no plans to stop. It also argued that the “14 and up” distinction makes these general-use toys, not meant for kids.

The U.S. Consumer Product Safety Commission, which comes up with safety standards for consumer products, also treats fidget spinners as “general use,” unless the company has specified they are for kids 12 and under. Children’s toys, unlike general use ones, are held to tougher lead-level standards.

Consumer advocates are disputing that “general use” classification.

In the meantime, though, consumers need answers. How big a problem is this? Should parents be worried about kids who have fidget spinners? Should the toys be scratched off Christmas lists?

Kaiser Health News spoke with two lead experts: Jerome Paulson, an emeritus professor and pediatrician at George Washington University, and Ellen Silbergeld, environmental health professor at Johns Hopkins University. It turns out the answers are not necessarily clear or easy.

Q: There are countless brands of fidget spinners out there, and we’re just hearing about two of them. Is this a serious concern?

Paulson: Is this one batch? Is this 10 million fidget spinners? I don’t know. Just touching them with kids’ hands is not going to be an issue. That doesn’t go through the skin. But if this lead is on the surface of the fidget spinner, and therefore gets on the fingers of the kids, and the kids put the fingers in the mouth or put the toys in their mouth — then, clearly, there is a pathway of exposure, and they shouldn’t be in the hands of the kids.

It’s just impossible to know — I certainly would not go running every kid who’s got a fidget spinner to the doctor until we’ve got a better sense of how widespread this issue is.

Silbergeld: This is indeed a hazard that is of considerable concern. If this [lead] were buried inside, it would not rise to the level of concern. But given that it is, in fact, a layer — a coating — then, of course, it’s right there.

My sense would be just to avoid fidget spinners altogether [until the CPSC tests them for lead]. I think that would be a prudent thing to do.

Q: Say I have a child who wants a fidget spinner. Would this put him or her at risk?

Paulson: There is no lead level that is safe, so we don’t want kids exposed to lead at any level. We’re more concerned about younger kids, because their brains are less finished, if you will. I understand these are ostensibly made for older kids … but that’s a distinction without a difference. The manufacturer and the sellers are fooling themselves if they think these won’t get into the hands of younger kids.

Lead is toxic for adults, too. If you’re one of the adults who chews on your pen, don’t chew on your fidget spinner. You could be lead-poisoned, just like your kid could be.

Silbergeld: It would probably be important to talk about the age of the child and what is the experience of the child. Do they put things in their mouth or not?

I’m going to make a recommendation because I think it has a generally good basis for it, and I would say people should get their children tested for lead.

If you haven’t had your child tested for lead at any point, this is a good time to start.

Q: What should I do if my child already has one of these? Throw it away?

Paulson: I don’t think I’d be very concerned. If parents want to check, there are these lead check kits that can be purchased at stores like Home Depot. They will reveal if there are high levels of lead on the surface of a toy. If it’s a hazard, it should be taken back and handled as hazardous waste — not just thrown in the garbage.

Silbergeld: If there is a determination that lead is present in this object in a way that it could result in exposure, then if parents have these things, they should throw them away.

If there is a determination that lead is present in this object in a way that it could result in exposure, then if parents have these things, they should throw them away. … This is quite wise and not hysterical, and is the sort of thing that makes the industry go crazy.

This is why we have these bans on toys. … This is not an unknown message.

Q: What about other toys? Is this a widespread problem?

Paulson: Every once in a while, this [issue of lead in toys] rears its ugly head again. Sometimes it’s manufacturers not paying attention to regulations they need to. It sounds like they’re paying attention to a regulation — but when you think about it, it’s not protecting the kid. You can say this is for kids 14 and older, not 6, and therefore doesn’t need to comply. But the reality is, we know younger kids are going to get exposed to it.

Silbergeld: Your best bet is to buy toys made in the United States because, frankly … American toy manufacturers are totally understanding of and compliant with making products that do not contain lead.

We can’t be totally confident in anything. But I think parents would be advised to get toys that are made in America.