Republicans undermine their own tax reform bill to repeal Obamacare 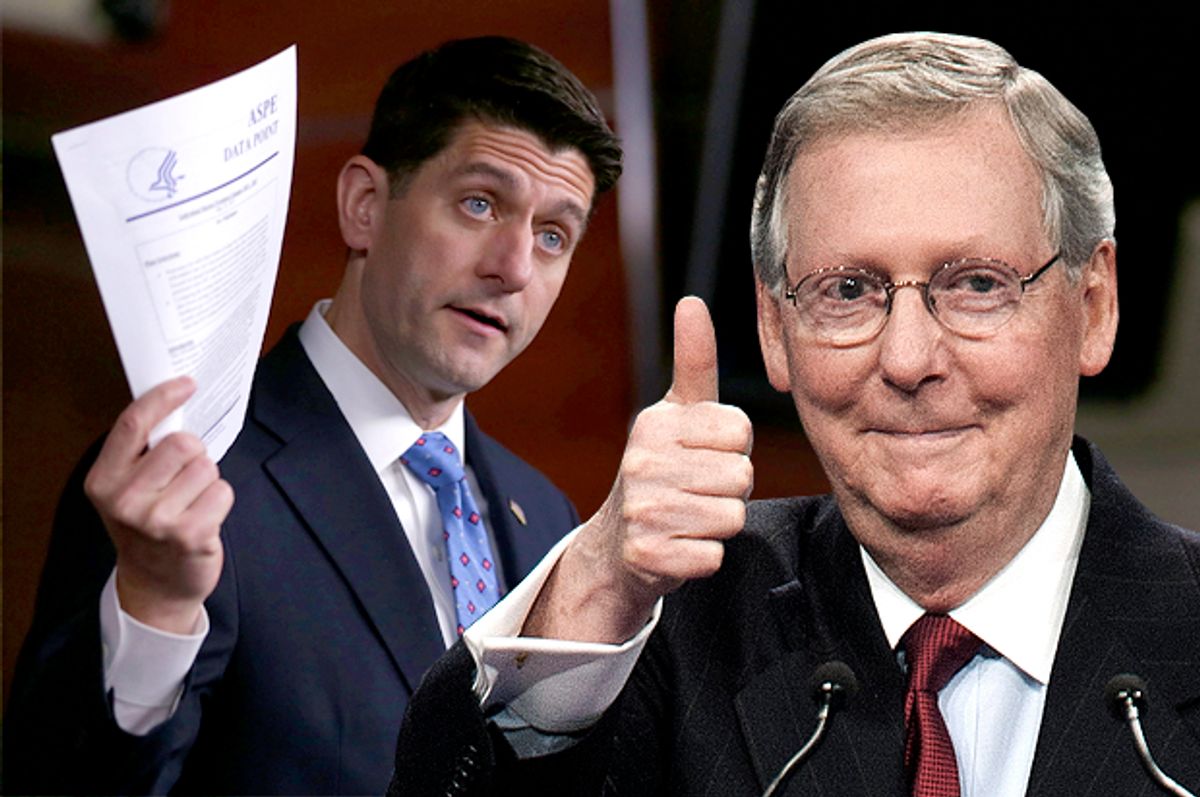 Anyone who began to breathe a bit easier after the numerous Republican efforts to repeal Obamacare failed earlier this year may have exhaled too soon.  The GOP's new tax reform bill presents a new avenue for Republicans to strip away health insurance from millions of Americans — roughly 13 million, to be exact.

The new threat to Americans' health care comes from Sen. Rand Paul, R-Ky., who announced on Tuesday that he would try to add an amendment to the tax reform bill that would repeal the individual mandate so as to "provide bigger tax cuts" to middle-class Americans, according to CNBC.

But as one health policy expert from the left-leaning Center for American Progress pointed out, Republicans' relentless to quest to repeal the crucial Obamacare component would most likely end in disaster for millions of people.

The tax bill would result in a $1,990 premium tax and an exodus of insurers from the market as well as increase the number of uninsured by roughly 13 million, according to projections from the Congressional Budget Office. The concern that millions of Americans would lose health insurance helped push moderate Republican senators like Susan Collins, John McCain and Lisa Murkowski against the various Obamacare repeal efforts earlier this year, and McCain has already told reporters that he would need to see the entire tax reform bill before deciding whether he could support repealing the mandate.

“I personally think that it complicates tax reform to put the repeal of the mandate in there, particularly if it’s done before the Alexander-Murray bill passes because of the impact on premiums,” Sen. Collins told the Post, referring to the bipartisan reforms currently being negotiated by Sens. Lamar Alexander, R-Tenn., and Patty Murray, D-Wash.

Meanwhile, the House of Representatives continues to rush to pass their own plan. House Majority Leader Kevin McCarthy, R-Calif., confirmed to reporters on Tuesday that the House of Representatives hopes to pass a bill by Thursday, according to CNBC. Speaker of the House Paul Ryan has expressed hope that they and the Senate could each push through their own versions of the bill, hammer out a joint plan through a conference committee and ultimately send a law to be signed by President Trump before the end of 2017.

"I do not think it will take long until we come back with that final version," McCarthy told CNBC.

Against this backdrop, Obamacare enrollment saw record sign-ups during the recent first week of open enrollment.