Following Karl Lagerfeld's Islamophobic rant, is it time we walk away from the designer? 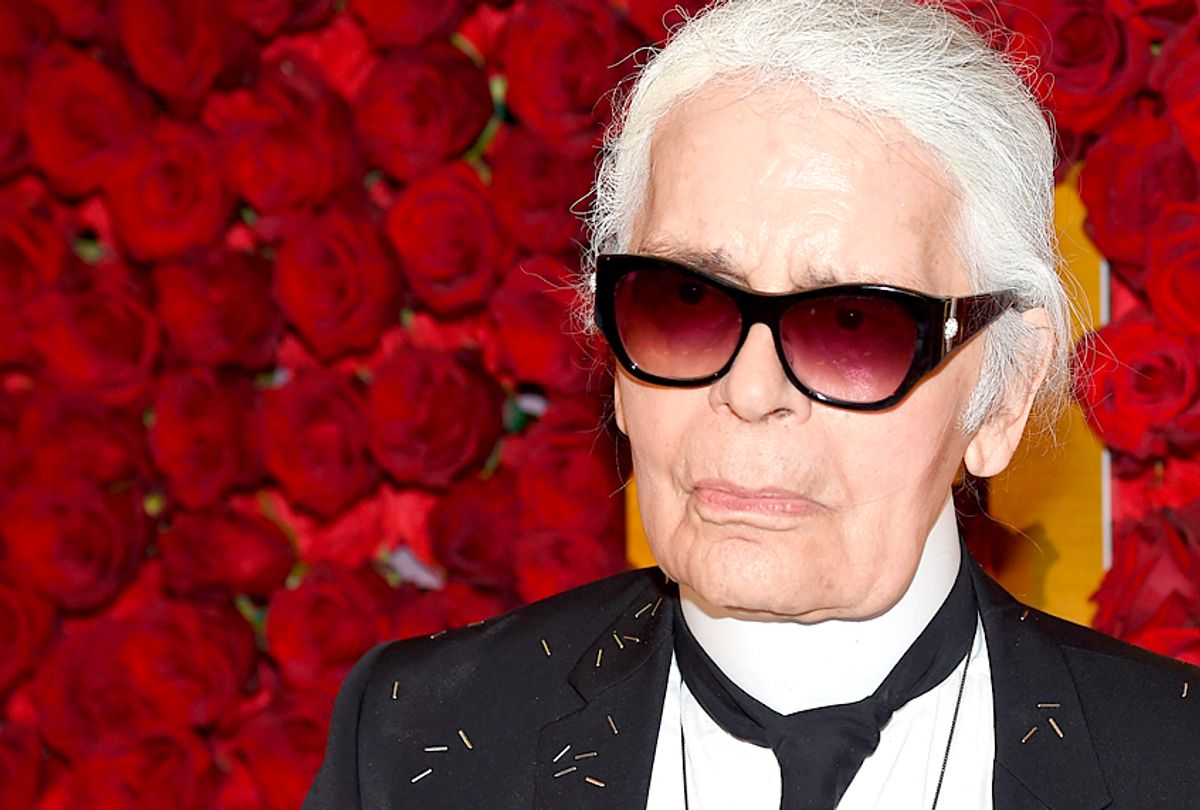 After telling the audience that he was about to "say something horrific," Karl Lagerfeld, the esteemed creative director behind the fashion brands Chanel, Fendi and his own namesake label, did pretty much that during a taping of the French TV chat show "Salut les terriens!" Saturday.

Addressing the current influx of immigrants into his native country of Germany, the 84-year-old Lagerfeld said, "One cannot — even if there are decades between them — kill millions of Jews so you can bring millions of their worst enemies in their place."

Having called German Chancellor Angela Merkel's policy on accepting refugees from war-torn Muslim-majority nations such as Syria a "huge error," he added that she "had already millions and millions [of immigrants] who are well integrated and who work and all is well . . .  she had no need to take another million to improve her image as the wicked stepmother after the Greek crisis."

The Conseil supérieur de l'audiovisuel (CSA), the French broadcasting regulatory commission, has already launched in inquiry into Lagerfeld's comments following a number of submitted public complaints about it. Given France's considerable laws and standards regarding the dissemination of hate speech, both Largerfeld and the network that hosts "Salut les terriens!," C8, could face prosecution and fines.

The basic thrust of Lagerfeld's comments mirror the European far-right reaction the multi-governmental response to the ongoing refugee crisis sparked by the wars in Syria and Yemen. Many Western European nations have conditionally accepted elements of the Muslim-majority wave of immigrants fleeing those bloody conflicts often to searing criticism from internal nationalist elements. This weekend's troubling far-right demonstrations in Poland were only one such example of this broad and often violent backlash.

Of all the Western European nations opening their doors to these immigrants, Germany has hosted the most. Most figures suggest that the republic has taken in over 1,370,000 since 2015, though some of them have already left or been deported.

Through her liberal policies towards and statements about the refugee crisis, Merkel became a moral leader in the global response to it early, something that made her the main target of critics who embrace the ever-more mainstream opinion that these new permanent or temporary citizens represent threats to national security or native European cultures and values. Perhaps in response, the chancellor has softened her position on refugees and, to some extent, curbed her formerly liberal policies.

In his comments on "Salut les terriens!," Largerfeld appears to have joined the growing number of Europeans who now hold the once exclusively far-right opinion that such influxes of refugees represent an existential threat to Continental identities and safety.

Yes, terror attacks by individuals associated with radical Islamic movements have pockmarked Europe this decade as have other clashes between local authorities and Muslim-majority groups of newcomers. Yet, relative to the total number of immigrants, such incidents are few and far between.

Lagerfeld called Muslims the "worst enemies" of the Jewish people — a notion belied by the history of Germany and central Europe.

Yes, the generalized Jewish diaspora and the Jewish-led state of Israel could be said to be in constant conflict with what westerners call "The Muslim World." But it's reductive and simply not factual to suggest that every individual Muslim is enemy of every Jewish person. It's Islamophobic. So too is suggesting that Muslim immigrants are incapable of integrating into the societies of host nations.

It's just as galling that the designer would use the Holocaust to sell this far-right notion. The Holocaust is the definitive example of far-right, nationalist racial identity theory becoming brutal policy. It's beyond the pale that he would use the tragic consequences of one form of ethnic theory to support another.

As disappointing as this is, it is not entirely surprising for those familiar with Lagerfeld. Afforded a particular bubble by his talent and position, he's forwarded a host of bizarre positions over the years without much blowback.

In the 2008, biographical documentary about him, "Lagerfeld Confidential,"  he confessed that he had been molested as a child by men and claimed his mother told him that he had it in coming. Decades on, he seemed to agree with her.

As well, the queer man has made stands against same-sex marriage and gay or lesbian families. "For me it's difficult to imagine one of the papas at work and the other at home with the baby. How would that be for the baby? I don't know," he said in 2010.

These and other statements that upset racial and cultural sensibilities come on top of more weirdness (he once evacuated himself and his core staff to Lyons from Paris believing that a falling satellite infected by the Y2K bug would slip out of orbit would destroy the city). All that, along with his baring and style have earned him a reputation as an eccentric in an industry full of eccentrics.

The stakes in Europe are too high, however, to brush his latest comments off as simply eccentric. They're part and parcel of a movement that is more and more beginning to look like the nationalist frenzy that overtook Germany eight decades ago. As of yet, Lagerfeld has not retracted or apologized for them. He must.

Currently, no serious movement against Lagerfeld has begun. None of the celebrity spokespeople for any of his labels have repudiated him (Fendi model Gigi Hadid in particular is the daughter of a Palestinian Muslim immigrant to the U.S.). His Jewish boss, LVMH's Bernard Arnault, hasn't said a word, even though so many of his customers come from oil-rich, Muslim-majority nations.

Eight years ago, LVMH swiftly, appropriately fired designer John Galliano from its Christian Dior label after a drunken, antisemitic public tirade. While, Lagerfeld was nowhere near as crude or blatant in his remarks, his source was the same font of hate. Should LVMH and others above Lagerfeld chose not to censor or punish him on some basis, it may indeed say something about where priorities and boundaries lie in the European dialogue right now.