A week later, the euphoria has faded and a new reality emerges: Democrats' road to victory remains long and rough 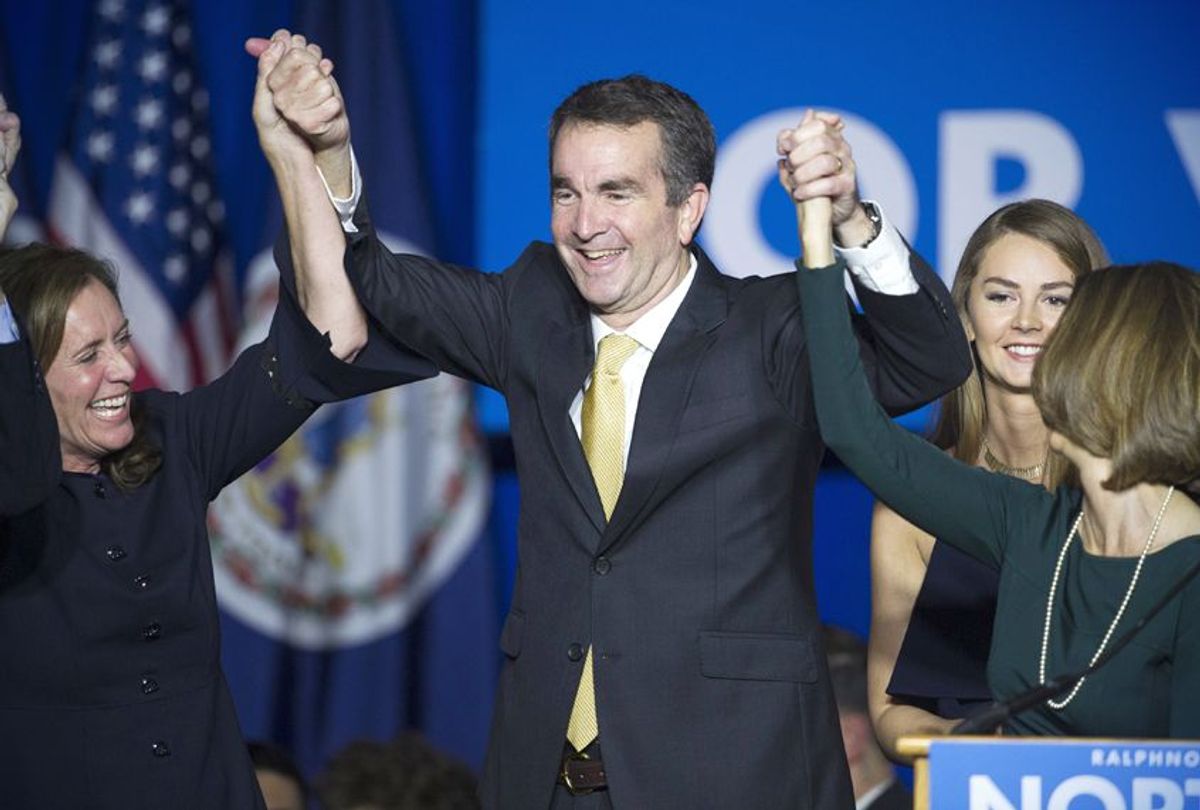 At first glance, Virginia’s election results re-energized progressives’ hope for a "blue wave" election in 2018. But much of the hype surrounding Democrats' surprising performance in instant exit polling has proven more than a little overblown in hindsight.

Democrats had their best Virginia showing in more than 30 years last Tuesday and won well over 50 percent of the statewide votes. Ralph Northam, the Democratic governor-elect, won by nine points over Republican Ed Gillespie, the largest margin of victory for a Democrat in a Virginia gubernatorial race since 1985. Northam fell short of Hillary Clinton’s vote total in the commonwealth by about half a million votes (1.4 million versus 2.0 million), but that's an excellent result for an off-year election, and Northam's margin of victory was also nearly twice as large as Clinton's edge over Donald Trump, and she beat Donald Trump by only a five-point margin.

But there's a powerful note of warning buried in all that good news for Democrats. While 2017 is certainly not 2018, still less the 2020 presidential election, a closer assessment of last Tuesday’s results suggests that there remain core causes of concern for the party’s electoral chances in the near term.

Democrats flipped at least 15 seats in the Virginia House of Delegates, shifting the balance of power from a 66-34 Republican supermajority to a nearly even split. But Democratic candidates for the state house actually won about 53 percent of the popular vote; a highly effective 2011 gerrymander, executed by Republicans, effectively robbed Virginia Democrats of their "wave" victory and a legislative majority. In fact, over the three previous state-house elections in Virginia, Democrats have won more votes in total, while Republicans took two-thirds of the seats in Richmond. Democrats have not controlled a majority in the House of Delegates since 2000.

The gap between votes and legislative seats in Virginia serves as a cautionary reminder: Democrats face daunting structural obstacles in turning around Republican majorities in Congress and in the numerous state legislatures they lost during Barack Obama’s eight years in office. Republicans have a similar national firewall against losing the popular vote in their politically lethal gerrymandering of congressional districts in many key states following the 2010 census.

In the 2010 election, the GOP's REDMAP strategy, led by then-chair of the powerful Republican State Leadership Committee Ed Gillespie (the losing gubernatorial candidate last week), flipped control of 18 legislative chambers nationwide. Republicans lawmakers redrew election maps for 40 percent of the House districts, with the result that swing states like Michigan, Ohio, Wisconsin, Pennsylvania and North Carolina are now predominantly represented by Republicans in Congress. All five of those states, of course, were also carried by Donald Trump in 2016.

The former chairman of the National Republican Congressional Committee, retired Rep. Thomas Reynolds, recently confirmed to The New York Times that gerrymandering has left the congressional map far more favorable for the GOP now than it was in 2006, the last time a Democratic wave election put an end to Republican control over all branches of government.

"Redistricting has strengthened both state chambers and the Congress, and that is much more significant in 2017 than it was in 2006," Reynolds told the Times. "Look how many seats are in play. It's not that many."

A resurgence of American political polarization that rivals the levels of single-party governance last seen in the post-World War II era has left Democratic voters largely clustered in a smaller number of congressional districts, even when the districts are drawn in a fair way.

Democrats will soon have full control in eight states, all touching the Pacific or Atlantic oceans, while Republicans will have full control of 25 states. Yet the old political maxim about coastal elites and “flyover” country is perhaps less true than ever. Instead, the ever-increasing partisan gulf can be observed much closer to home, within the confines of each state.

Northam lost by wider margins outside the heavily populated and racially Northern Virginia suburbs than Gov. Terry McAuliffe, also a Democrat, did in 2013. Virginia has backed the Democratic nominee in each of the last three presidential elections, and both its U.S. senators are Democrats. Counting Northam, four of the last five governors have been Democrats. Still, Northam fared worse than McAuliffe in 89 of Virginia’s 133 counties and cities.

In Fairfax County, just outside Washington — the largest and most liberal county in Virginia — Northam beat Gillespie by a staggering 37 points. This represents a major shift in a relatively short time. George W. Bush narrowly carried Fairfax in 2000, when the Democratic share of the vote in the remainder of the state stood at a nine-point deficit with the GOP. Even with their big victories on Tuesday, Democrats were about even with Republicans across the rest of the state.

A recent demographic analysis by NBC News found that the trend holds true for Democrats in other states. Since 2000, NBC reported, “in half of U.S. states between 2000 and 2016 — in places as politically divergent as Alabama, Kansas, Indiana, Maine and Wisconsin — Democrats saw both a significant increase in their margins in each state’s most populous county and a significant decrease in the party’s performance in the remainder of the state”:

In 39 of the lower 48 states, Democrats significantly increased their vote share in presidential elections from 2000 to 2016 in each state’s most populous county. And in all but two of those states, Democratic margins outside of the most populous county failed to increase at similar rates, widening the partisan gap between each state’s more urban center and its surroundings.

Combining the votes from 2000-2016 in all of the contiguous United States shows how the Democratic share of the vote in each state’s largest county rose from a cumulative 18.6 percent in 2000 to 31.4 percent in the last election. Subtracting those votes from the total shows that, on average, Democrats only won the remainder of U.S. counties once in the past four presidential elections — in Barack Obama’s 2008 landslide.

In other words, no matter how smashing the Democratic margins in highly educated suburbs and racially diverse cities may have been, because Democratic voters are so geographically concentrated, electoral success for the party has remained fleeting.

One of the most striking results from the Virginia exit polls is that Northam did slightly better across almost all subgroups, including blue-collar white voters, than Hillary Clinton did in 2016. President Trump's support among white men without a college degree, meanwhile, has fallen to 56 percent from the 71 percent who voted for him a year ago, according to the exit polls conducted by Edison Media Research. He has also lost support among white evangelicals, with 66 percent supporting him now instead of the 80 percent that voted for him.

Asked about their opinion of Trump as president, 40 percent of Virginia voters approved this year, while 57 percent disapproved. In fact, that represents almost no difference from Election Day last year, when the split was 37 percent favorable to 61 percent unfavorable. One key difference this year: Voters told ABC News’ pollsters last week, by a two-to-one margin, that they were casting their ballot to show opposition to Trump rather than support for him.

History shows that when a president's approval rating falls below 50 percent, his party suffers a punishing blow in the midterm elections. Trump currently stands at 37 percent in the latest Washington Post-ABC News Survey. No American president has had a net negative rating so high in his ninth month in office since Harry Truman in 1945.

In another bit of good news for Democrats, Virginia’s election showed that the party may be overcoming the “midterm falloff” problem. While the drop-off between November's election and Tuesday’s was about 1 million voters, turnout was at a 20-year high last week. A similar spike in Democratic enthusiasm could easily swing a midterm election, when the party out of power typically gains seats. Republicans hold a 46-seat edge in the House, so a net loss of 24 seats in 2018 would give Democrats the majority.

NBC News found that House Republicans represent 54 of the so-called Panera Bread suburban districts, like those where Democrats ran up their margins in Virginia last week. More than 75 percent of the population in these congressional districts lives in an urban area where the electorate tends to be more diverse, better educated and wealthier than in the nation as a whole. Hillary Clinton won the presidential vote in 16 of those districts, and Trump beat her by fewer than five points in another nine.

As political junkies know well, there are 19 counties in the U.S. that have voted for every winning president since 1980. While such places are hardly a microcosm of America, they do offer a window into the demographic group that has propelled nearly every president into the White House: blue-collar white voters.

Whites without four-year college degrees, Trump’s base, make up fully half of the adult population. Unlike the Democratic base, Trump voters tend to be widely dispersed across the continent, which increases their political power.

If Democrats hold any hope of bolstering their margins in suburbs and cities in a way that results in actual wins and a possible congressional majority, they must take advantage of Trump’s unpopularity and compete for every seat vacated by a Republican retirement -- even in rural GOP country. Finding that ever-elusive message that manages to appeal to blue-collar workers and highly-educated urban denizens may not be as difficult as the party has managed to make it seem. At least knowing where to find the voters is a good first step.