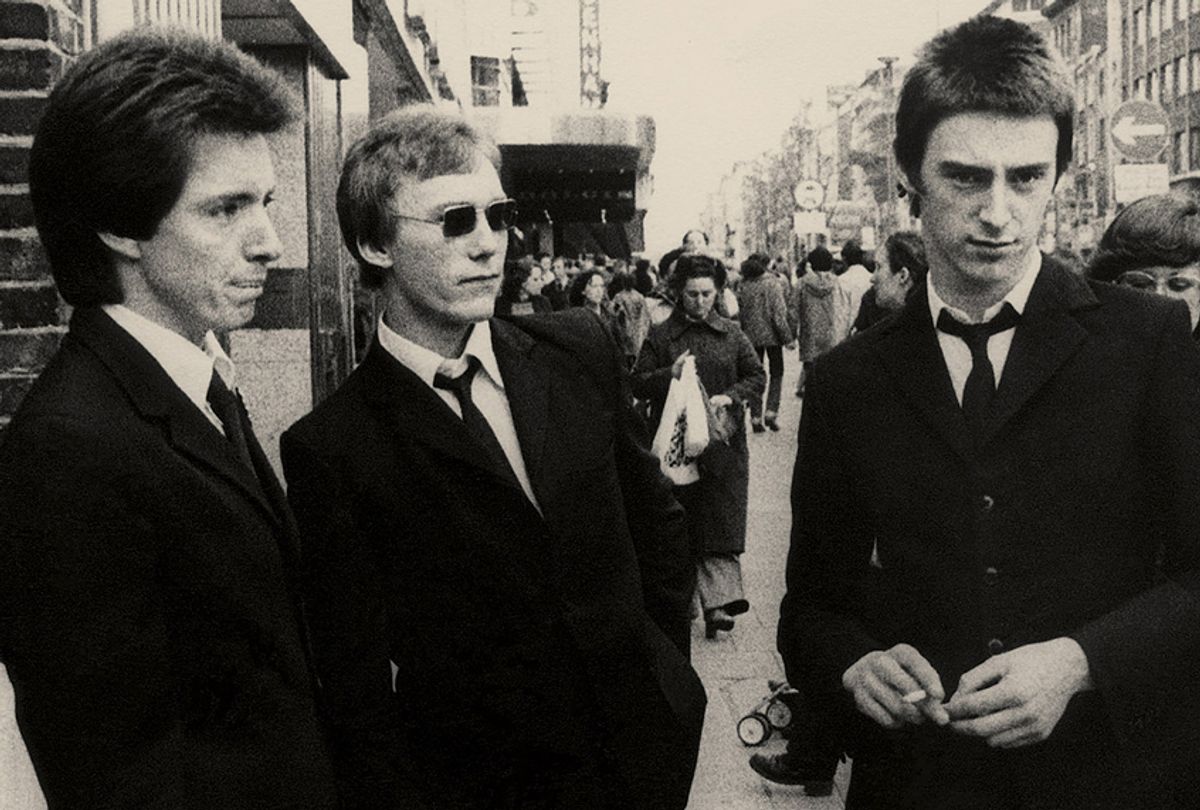 We’re all familiar with a film considered so bad that it’s good, but what of a rock and roll band so indicative of an era that it necessarily has to come from another one? That question strikes me as the root theme of both Universal’s rabblerousing new Jam box set, 1977, and the band’s very legacy.

First matters: there have been a lot of Jam box sets lately, and if they’re one of your favorite bands, you must be in manna land these days. Others will cite overkill and complain about who has the time to tour the dustbin dossier of a mod band from the late 1970s, while likely listening to crappy music in the stead of stuff like this. Because, frankly, the Jam were awesome, even if they always felt, given their era and what we remember of said era, off-kilter with rock’s thru-line and where a band like this one should have happened in it — like, say, 1965-1966, right after rock and roll got smart, and prior to psychedelia.

The year 1977 was year one so far as Jam-dom went, with Paul Weller and crew releasing two albums, the debut "In the City" and sophomore outing "This is the Modern World." Both, of course, are included on this set, which is putting forth an argument — and these kinds are always fun to debate — that in 1977 the Jam had one of the best years any rock artist ever has.

Some other contenders for that list: the Beatles in ’63, Dylan in ’66, Elvis in ’54, Hendrix in ’67. To qualify, you need a lot of material, you probably need to kick ass on a great run of gigs, a couple all-timer albums are useful, and toss in some landmark radio/TV appearances, plus it wouldn’t hurt if you tweak the musical and cultural zeitgeist in some way as you’re launching your career/art into the exosphere.

Those first two Jam albums were admirably peppery. It’s as if Jimmy, the central character from the Who’s mod rock opera, "Quadrophenia," took on life as bookending pieces of vinyl. A mod was short for modernist, with their glory cultural run happening in Britain’s early and mid-1960s. They loved scooters and long, long coats, pills and Tamla soul. They were the rivals of the more famous teddy boys, the throwback rockers to the Elvis, Jerry Lee, Gene Vincent era, who are remembered more today because the Beatles once dressed like them when they were but four dots in Fame’s eye.

The early Jam espoused this mod aesthetic, despite occurring more than a decade after the fact, and I think that has dogged them somewhat when we talk about the best bands. That’s why these reissues can be handy, as they take us back into Paul Weller’s songwriting. He was a tauter version, as a songwriter, than Noel Gallagher, almost two decades before the fact, with a lot of Ray Davies in him, far more than the Who’s Pete Townshend, who is often cited as a Weller forerunner.

Davies and the Kinks had a brief flirtation with nascent metal (“You Really Got Me,” “All Day and All of the Night,” “I Need You”) before ditching that for the world of ideas and observations, where what was glimpsed at a subway stop, which no one else would have even noticed, became the root of a romance that could feel timeless and Chaucerian. Era-less. Also, almost always tuneful.

Paul Weller was the same way, right from the start of the Jam’s career. The Jam made it sound like both punk and post-punk were happening simultaneously, with a band who were really neither, fleshing out tube station vignettes that became rippling musical tapestries. And goodness how they loved Motown, and could infuse black music into their schema in ways that had other white English quartets and trios executing double-takes.

The Kinks couldn’t do this, the Who tended to sound awkward — albeit manfully so — when they tried in their 1964-65 phase, while the Stones could be adroit and the Beatles often masterful. But if you find that you have a hard time starting your days, let me recommend a blast of “Non-stop Dancing” from "In the City." That and a cup of coffee will send out onto the streets a veritable bouncy beast, primed to kick ass at that morning meeting you were worried about.

As with the Who, so much of the Jam's early sound is built up from the rhythm guitar, and you can’t over-emphasize that notion of tautness. There is great tensile strength in songs like “I’ve Changed My Address” from the debut and the title track of the follow-up. Parts feel stretched like a steel wire, but with that wire covering a short distance, all of the energy centered on the traversal of points A to B.

It takes some serious balls to mix black rhythm and blues with English white boy rock like this. I despair when I wonder if anyone with the requisite chops would even try to today, for fear of getting branded a cultural appropriation goon. Then again, if you dropped the Jam in the here and now, I don’t think they’d care.

Genius, I have learned, does not sit around and wait for the most favorable epoch; genius gets on with it, in whatever time period it may be situated. There is always a roost, let us say — and when there is genius, there always comes a time to rule it, regardless of the specs of said roost.

For the Jam, this was the late 1970s, after Paul Weller had processed all of the music that had come out in that 1965-66 era, which probably had something to do with how he came to write the songs he did and others that he wouldn’t have been interested in writing.

But when you’re smack dab in a time period, controlled filtration doesn’t work so readily. You spend your time processing what is going on around you, because you are there in the valley, rather than up on the butte, surveying. But not so the Jam, who became the perfect 1960s band by existing in another decade, without ever sounding like a pastiche or throwback.

The demos on the box set show how fully formed Weller’s songwriting gift was before the band hit the studio. Demos can be messy, inchoate things, but with the best writers they can match, and sometimes exceed, their eventual full-band counterparts. Pete Townshend’s demo work, as collected on the "Scoop" sets, is a fine example. Weller is in that crowd, but it is the September 10, 1977 show from the Nashville — a London club — that the seasoned Jam buffs will lose their minds over.

Keep in mind: punk was thrashing your brains out in London at this time, and a very exciting time at that. Listen to this gig, though, which is more exciting still, more adrenalized, even, than punk, but so much more meticulously balanced. There is blazing away on stage, and there is whatever the Jam are doing here.

“All Around the World” sounds like a layout plan for this band’s entire career, pitched from a stage. “I said I want a reaction, all over this land,” Weller declares like a deep soul shouter who can’t leave the stage he’s already been up on all night. There’s nothing proselytizing about it. Nor is there anything especially 1977 about it, and it makes me hesitant to say that the perfect embodiment of a 1960s band really belonged in that decade at all. I hear this and it makes me think, well, just give them all the decades, then.