Conservatives turn #MeToo into a witch hunt: Speaking out comes at a price

As Congress struggles with the widening harassment scandal, the burden to “name names” becomes victim-blaming 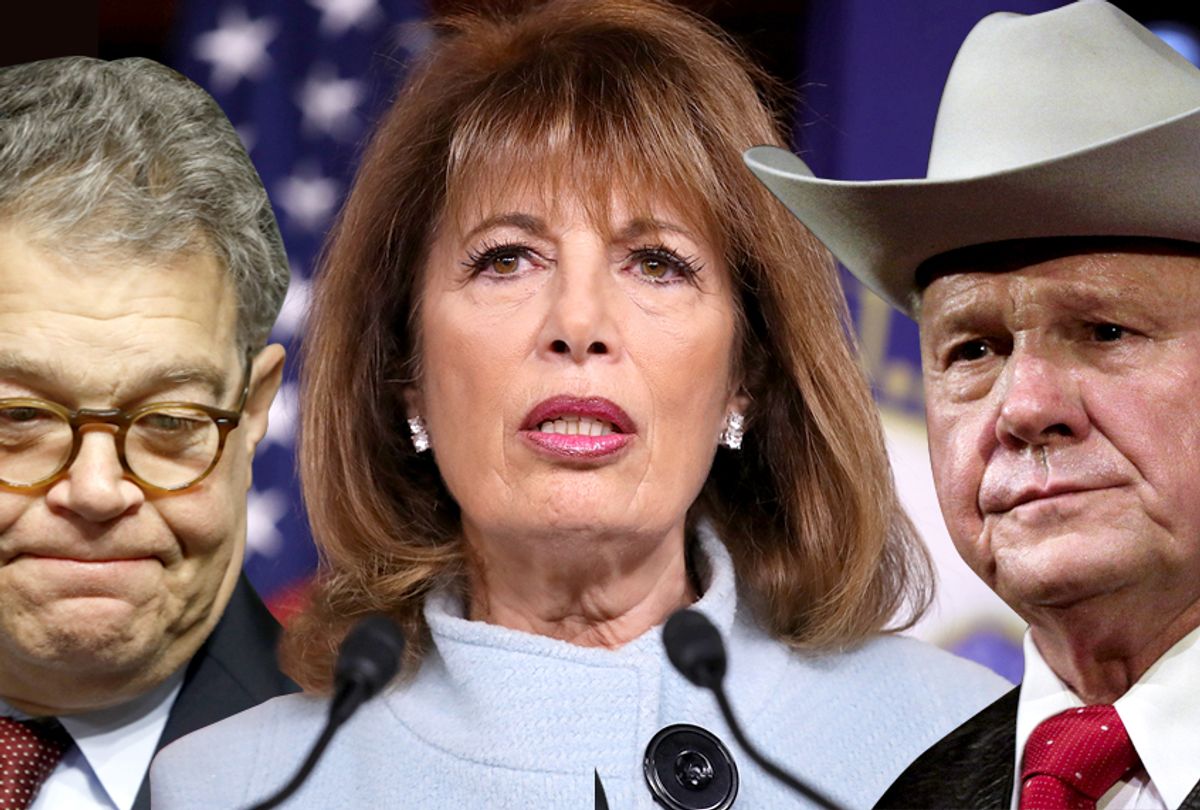 One month ago, during the first days of the Harvey Weinstein fallout, a Democratic congresswoman made minor headlines when she offered her anachronistic advice on how to avoid sexual predators: “Refuse to cooperate.”

We are now five weeks into the #MeToo movement, spurred on by the bombshell New Yorker report published in early October, and both the Democratic and Republican parties have been rocked by allegations of sexual misconduct — albeit to vastly different degrees.

It has only been a week since the first woman to accuse Alabama GOP Senate candidate Roy Moore of inappropriate behavior while she was a teenager came forward, and only a day or two since commentator Leeann Tweeden produced photographic evidence of Sen. Al Franken of Minnesota, a Democrat, groping her while she slept back in 2006. In that time, there has been a notable shift in the collective reaction of political leaders.

Last week, Alabama State Rep. Ed Henry responded to the allegations of pedophilia against Moore by calling for his alleged victims to be prosecuted: “If they believe this man is predatory, they are guilty of allowing him to exist for 40 years. I think someone should prosecute and go after them. You can’t be a victim 40 years later, in my opinion.”

On Thursday, a flock of Democratic senators quickly came forward to condemn Franken’s behavior. Beyond the ideological split that could explain some of the difference, it is clear that a real sea change is afoot in our culture. National Republican committees eventually pulled resources from Moore’s campaign, only days before the Dec. 12 special election in Alabama, and Senate Republicans have yanked their support virtually en masse.

But even as seemingly everyone outside of Alabama (and the White House) is awakening to a new reality where women are empowered to share their stories, others continue to question why victims wait years to come forward about sexual assault. They are turning #MeToo into an excuse to blame more women beyond the accusers.

During a hearing Tuesday, Rep. Barbara Comstock, a Republican from Virginia, said she was told about a staffer who quit her job after a lawmaker exposed himself. At the same hearing, Democratic Rep. Jackie Speier of California, who revealed during the early days of #MeToo that a boss “held my face, kissed me, and stuck his tongue in my mouth” when she was a congressional aide, claimed that two currently serving members of Congress -- one a Republican, the other a Democrat -- are among those who have been accused of sexual harassment.

Comstock and Speier both declined to identify the lawmakers in question, in order to protect the victims.

Some congressional conservatives responded to their revelations by seemingly casting Comstock and Speier as accomplices after the fact.

Rep. Darrell Issa, a California Republican, said the female members of Congress who shared stories of harassment have an “obligation” to “name names.” He said Speier “should go fully public. And I don’t know why she hasn’t as of this moment.”

“Name them,” Sen. Lindsey Graham demanded of women who know of sexual harassers. “Just get it out. Lay it out.”

Some clamoring for the identification of congressional bad actors seem to be looking for an excuse to blame the women. Josh Hawley, a Republican running to unseat Democratic Sen. Claire McCaskill in Missouri, tried to find a way to blame her for Al Franken’s behavior. Hawley also qualified his call for Roy Moore to withdraw from the Alabama with the favored Republican refrain "if true."

On Fox News Wednesday night, as the graphic account of yet another Roy Moore accuser dominated the coverage of competing networks, host Laura Ingraham opened her show by decrying the female lawmakers who chose not to reveal the identities of Congressional bad actors as enablers.

"Why aren't they naming names? Why aren't others naming names?" Ingraham demanded of a former congressional intern who said she had been harassed by a member of Congress and who also refused to identify him.

Former Fox News host Megyn Kelly polished her act on her new NBC show the next morning, but she also opened the program by questioning why Barbara Comstock’s testimony did not include the name of the congressman who exposed himself to an employee. For the record, Comstock has explained why: She doesn’t know the victim, who passed her story on anonymously for Comstock to share with Congress.

Victims’ reputations are repeatedly picked apart after they go public with accusations. Even in this rapidly changing era where many of us are quicker to listen to a victim’s account, many accusers of powerful men are still dismissed as opportunists. We may be in the midst of a sea change, but our culture is still a rape culture. TMZ has sent its artful male correspondents to shove cameras in the faces of female lawmakers and bark demands they expose their colleagues.

New Hampshire Democratic Rep. Annie Kuster recently explained why she didn’t go public after she was groped as a young congressional staffer nearly four decades ago.

“Even if I had told someone, nothing would have come of it,” she said. “This is why people didn’t tell for so long. There was no upside to telling. There was no consequence to the perpetrator and the downside would be significant. I was 23 years old. This was a famous person.”

Of the roughly 33 million American women who’ve endured unwanted sexual advances at work, 83 percent were angry about it, according to an ABC News-Washington Post poll. But only 42 percent reported it to a superior.

While the way #MeToo has played out leaves more to be hopeful about than not, watching the response of some men (and some women), Republicans and Democrats, has been a frustrating reminder that victim-blaming is pernicious and can spread. Beyond the treatment of Roy Moore’s and Al Franken’s accusers, the burden to “name names” too often relies on the labor of women. We won’t make a dent in rape culture until we stop asking victims why they wait to report their abuse.

The #MeToo movement is a great start and its companion bill is an even better first step. It would allow victims of sexual harassment on Capitol Hill “to report anonymously for the purposes of getting access to support services, counseling and treatment.” Only the name of the perpetrator, “whether it’s a staff member or a member of Congress,” would be made public.