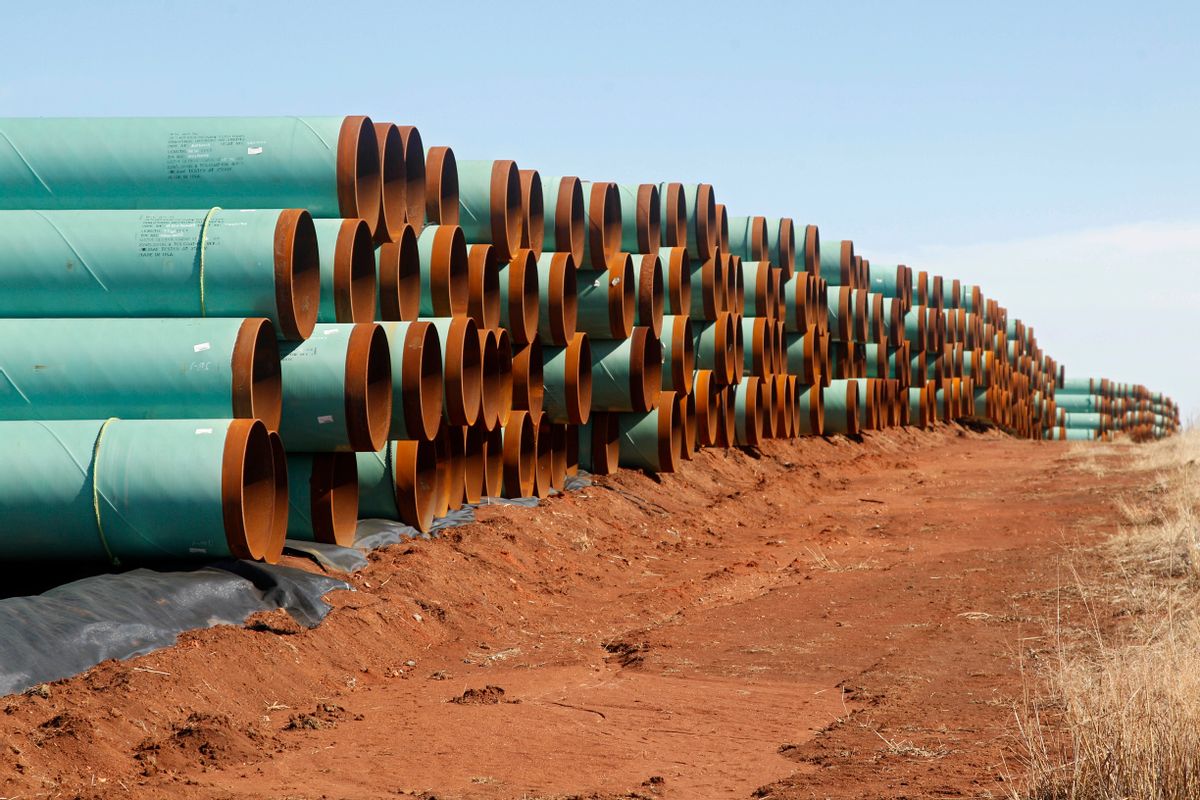 An estimated 210,000 gallons of oil leaked out of the Keystone Pipeline in South Dakota on Thursday, and sparking another debate about the use of pipelines and the threat they pose to the environment.

"We’ve always said it’s not a question of whether a pipeline will spill, but when, and today TransCanada is making our case for us," Kelly Martin, the Sierra Club's Beyond Dirty Fuels campaign director said in a statement on Thursday. "This is not the first time TransCanada’s pipeline has spilled toxic tar sands, and it won’t be the last."

The spill of about 5,000 barrels of oil took place in a grassy field near Amherst, South Dakota, and cleanup crews and emergency crews moved to assess and attempt to mitigate the situation. TransCanada, the company in charge of the pipeline, said in a statement that the spill took place at approximately 6 a.m. local time.

TransCanada also said the pipeline was safely shut down "after a drop in pressure was detected in its operating system resulting from an oil leak that is under investigation."

"This is not a little spill from any perspective," Kim McIntosh, an environmental scientist with the South Dakota Department of Environment and Natural Resources, told the New York Times. She added that livestock, and drinking water did not appear to be threatened at the time.

But the news comes as regulators in Nebraska are expected to announce on Monday whether or not they will grant the final permit for construction of the Keystone XL pipeline, which is also operated by TransCanada.

"That’s our fear — that pipelines do leak," said Jeanne Crumly, whose farm in Nebraska is along the construction route of the Keystone XL. Crumly also said that 90 Nebraskan landowners have not signed easements with TransCanada, and have staunchly opposed the pipeline receiving its final construction permit, the Times reported.

Critics have long spoke out about the dangers pipelines pose to local waterways or any other sources of water in the proximity of the pipeline, and Thursday's spill is only the latest example of inefficacies and environmental endangerment.

The Keystone XL is only expected to create 35 permanent jobs.

Despite Trump's pledge to ensure the project was built with American-made steel, it was walked back in early March, because most of the pipeline had already been constructed. And of course, the golden rule for Trump still applies: there truly are tweets for everything.

The Keystone pipeline will create 20,000 jobs and make us less energy dependent from the Middle East. @BarackObama says No!

@BarackObama is obviously going to approve the Keystone pipeline after the election if he wins. His supporters are being played.

So sad that Obama rejected Keystone Pipeline. Thousands of jobs, good for the environment, no downside!