Steve Bannon vs. Karl Rove: Smackdown of the so-called geniuses

What if Steve Bannon's campaign to destroy the Republican Party is really just a moronic personal crusade? 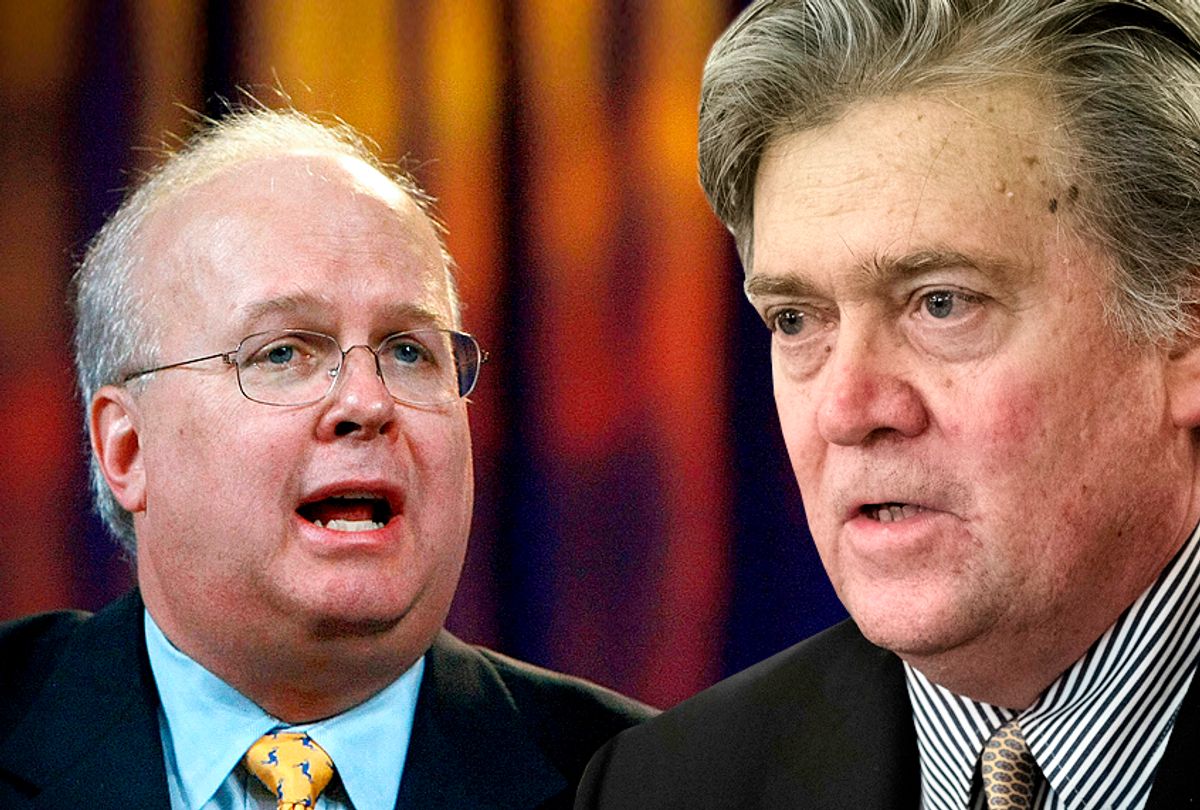 It had been reported all week that President Trump wasn't going to comment personally on the underage dating and sexual assault scandal whirling around Alabama Republican Senate candidate Roy Moore because he knew it would raise the issue of his own sordid history. Trump refused to take questions about it from reporters and let his press secretary say only that the White House found the complaints "troubling" but planned to let the people of Alabama decide what to do about it.

But obviously he was watching Sean Hannity late at night, as he is wont to do, and his uncontrollable, juvenile compulsions finally won out. The need to insult Sen. Al Franken was too overwhelming and he had to take to Twitter to let it out:

Trump may not realize that the Alabama election isn't for another four weeks, and he's likely to be grilled about his own "issues" every time he faces the press. And he has another little problem that he may not have counted on. The team at Breitbart News is not happy with the fact that the first daughter said that there was "a special place in hell" for people who do what Moore is accused of doing. This was Breitbart editor Alex Marlow on a talk radio program:

Caller: Well, when Donald was being accused of these things where there was definitely more proof and more opportunity, where was she then? But now she's all outraged by Roy Moore. I don't know why she just doesn't keep quiet.

Marlow: Right, especially when there's been so many allegations against President Trump, I don't know why the daughter of President Trump who has been accused by [attorney] Gloria Allred and some dozen, maybe two dozen, women over the years doing something inappropriate, and nothing's ever come of that. So why does Ivanka want to continue to pile on? I don't know. I think that she just loves getting her name out there in the headline and they can put more photos up. So that's her M.O.

Has Bannon decided that MAGA belongs to him now? According to this fascinating piece in The New Yorker by Susan B. Glasser, Bannon's battle against the establishment is very personal and is not entirely motivated by his apocalyptic vision of impending chaos but something much more prosaic: a need to defeat the man who held his position in the previous Republican administration, Karl Rove.

I was unaware that Bannon was so competitive with Rove, but according to Glasser's article, there's so much bad blood there that Bannon decided to take on an incumbent Republican congressman in North Carolina solely because Rove knew the guy and gave a speech on his behalf. It's the only House race in which Bannon has endorsed a primary challenger.

Breitbart published a story in which it called the incumbent, Rep. Robert Pittenger, a tool of the “Karl Rove-backed elites” who had “sold out his district.” But Pittenger is actually a hardcore Trump supporter who's voted with the president 96 percent of the time. He told Glasser, “I’ve never met Steve Bannon, but it seems to be a game. There’s all kinds of games up there in Washington.” Pittenger and Rove both said that they'd known each other for a long time and that Rove was simply doing a solid for a friend.

One can understand why Bannon wouldn't like Rove, who has been very critical of both Bannon and Trump in his Wall Street Journal columns and told Glasser that they knew nothing about electoral strategy and had no idea how to win races around the country, much less upend the establishment, as Bannon has vowed to do. Rove is probably right about that. The Trump operation, both inside and outside the White House, is a mess.

Until 2016, Steve Bannon was running his upstart web site, and that no doubt burns Rove, a political junkie who has spent a lifetime studying political history and the minutiae of electoral strategy and worked in the political trenches for decades before he made it to the White House. Of course, that's exactly what Bannon loathes about Rove, believing that he's a dinosaur with nothing to offer the revolutionary new politics he and Donald Trump have created.

It's interesting, however, how much the two men actually have in common. Both are autodidacts who think of themselves as strategic and tactical geniuses. Rove may seem like a staid elder statesman compared to Bannon, a self-styled "Leninist" and agent of chaos, but Rove was just as grandiose in his thinking when he came to Washington 17 years ago. He believes in realignment theory and thought that Bush's hanging-chad victory in the 2000 election was the beginning of a major shift, led by him, to GOP dominance for the foreseeable future.

Bannon believes in a bizarre prophecy of "four turnings," in which world events unfold in predictable cycles of roughly 80 years each, that can be divided into four chapters, or turnings: growth, maturation, entropy and destruction. Under this nutbar theory, it's been 80 years since fall came, in the form of the Great Depression and World War II, and now winter is upon us.

Both of these guys have way too much faith in their own insights and abilities. This article by Joshua Green in the Atlantic about Rove at the end of Bush's second term should serve as a cautionary tale for Bannon. The arrogant, "go-it-alone" strategy in which the White House and its allies don't bother with politics and simply depend on dominance didn't work for Bush, who ended his disastrous reign having diminished the Republican Party to such a degree that it enabled the man whom he holds in total contempt to become its leader. All the mistakes that Trump and Bannon are making today were first made, if in less crude and obvious fashion, by the Bush administration.

Rove should be a bit more humble and Bannon should be a bit less smug. Neither one of them is nearly as smart as they think they are. And both of the men who employed them are even worse. Bush left the Middle East in ruins and presided over an epic financial crisis. Trump is busy finishing the job in the rest of the world and is turning the United States into a banana republic. Spare us any more of these "geniuses." They're killing us.