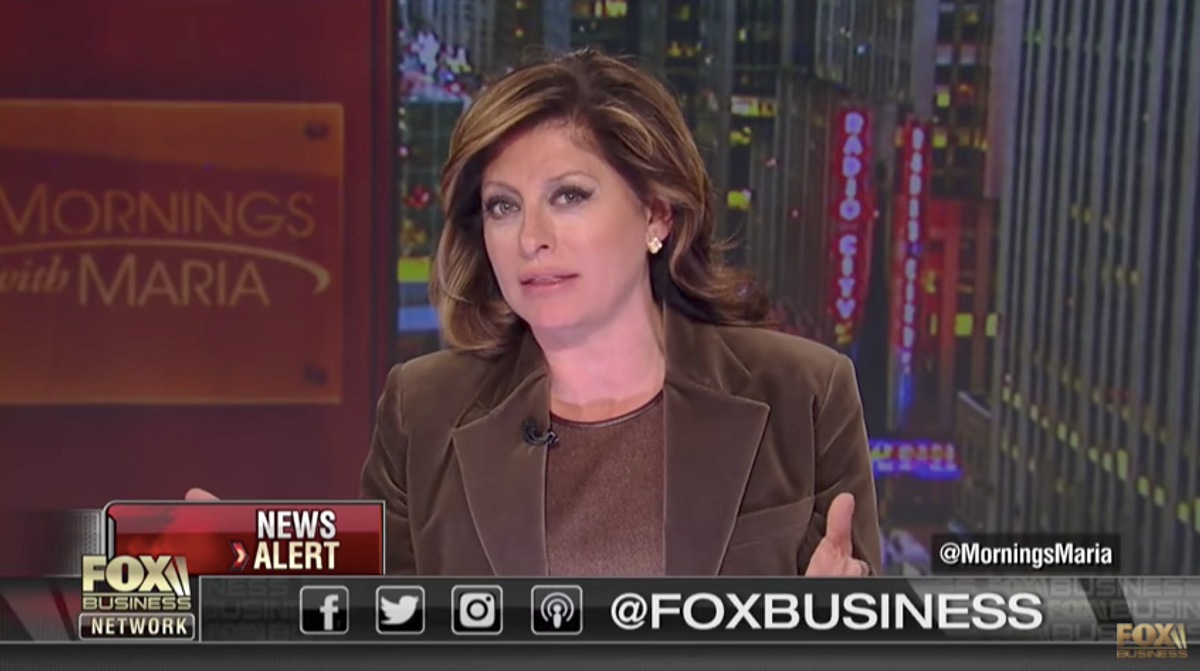 Fox Business host Maria Bartiromo made the claim on Friday that "there are no allegations" against President Donald Trump, despite him facing accusations from at least 16 women who all have said he sexually harassed them, or engaged in inappropriate conduct.

In a panel discussion Bartiromo and her guests were ripping into Sen. Al Franken, D-Minn., who was accused of groping and forcing a kiss on radio host Leeann Tweeded during a USO tour in 2006.

Bartiromo then asked one of her guests, Christopher Lu, the former assistant to President Obama, whether or not he agreed with Sen. Kirsten Gillibrand, D-N.Y., who recently said that former President Bill Clinton should have resigned when his inappropriate relationship with intern Monica Lewinsky surfaced.

Lu explained that Clinton would have likely been "seen under a different political lens" if it had come up in the current environment.

"We say that" different standards would be applied today for Clinton, Lu argued, but he also pointed out that the infamous Access Hollywood tape about President Donald Trump, and the allegations against Alabama Senate candidate Roy Moore, have surfaced.

"You need to look at this all in a whole," Lu said. "How do you measure allegations with a photo versus allegations involving a yearbook? What are the standards when you're looking at a political election versus legal proceedings."

"What do you mean how do you differentiate?" Bartiromo shot back. "There's a picture [of Franken]."

"So if they deny the allegations, yet you have other evidence and you have their testimony — I'm inclined to believe all of the womens' testimonies," Lu said.

"Just to be clear, there are no allegations against the president," Bartiromo claimed.

After Lu clarified that the allegations were from before he was elected president, Bartiromo argued, "He said during the campaign that wasn’t true. In fact, didn’t he say also that, you know, all of this will come to light and there will be a lawsuit? I mean… we’re talking about a situation where we have a picture with the guy’s hands on her breasts. You can’t compare the two, Chris."

Bartiromo insisted "it's not the same at all" and it's like comparing "apples to oranges."

After the segment CNN's Brian Stelter tweeted that what Bartiromo said was "really strange" considering numerous women have alleged Trump engaged in misconduct. Bartiromo then blocked Stelter on Twitter, according to screenshots he published.

I’ve always had a cordial relationship with @MariaBartiromo. I can only assume that this tweeted observation is why she suddenly blocked me... ‍♂️ pic.twitter.com/p6PEGTiBGk

3. Wow @brianstelter she blocked me too after my two tweets above. pic.twitter.com/7gmtpLMcBj — Yashar Ali (@yashar) November 18, 2017

It's not clear if her blocking spree continued, but she sure felt the wrath of the Twitter mob.

So much gaslighting, it’s a wonder @ChrisLu44 survived the carbon monoxide poisoning. (@MariaBartiromo, girl. What has happened to you.) https://t.co/QaUs9UONLb

I remember when Maria Bartiromo was considered a serious journalist. Would love to see her bring her nonsense and state tv sensibility to 4 pm on MSNBC — Steve Schmidt (@SteveSchmidtSES) November 18, 2017

According to Sarah Sanders (and Maria Bartiromo) sexual assault allegations don't count if you deny them. So it's all good. https://t.co/QLk0bMctru

Ha! @MariaBartiromo blocked me on Twitter after I ripped her inane criticism of @NFL protests and Colin @Kaepernick7. Maria, when some media folks get on your nerves, just do what I do: ignore them. Or mute them. Blocking is just weak. https://t.co/hwPTBUTXpn

A reminder that at least 15 women have accused Donald Trump on the record of unwanted physical contact. Listen for the patterns in their stories. #inners pic.twitter.com/thoTR3OyXv