Al Franken apologizes for groping, as calls for investigation and resignation mount 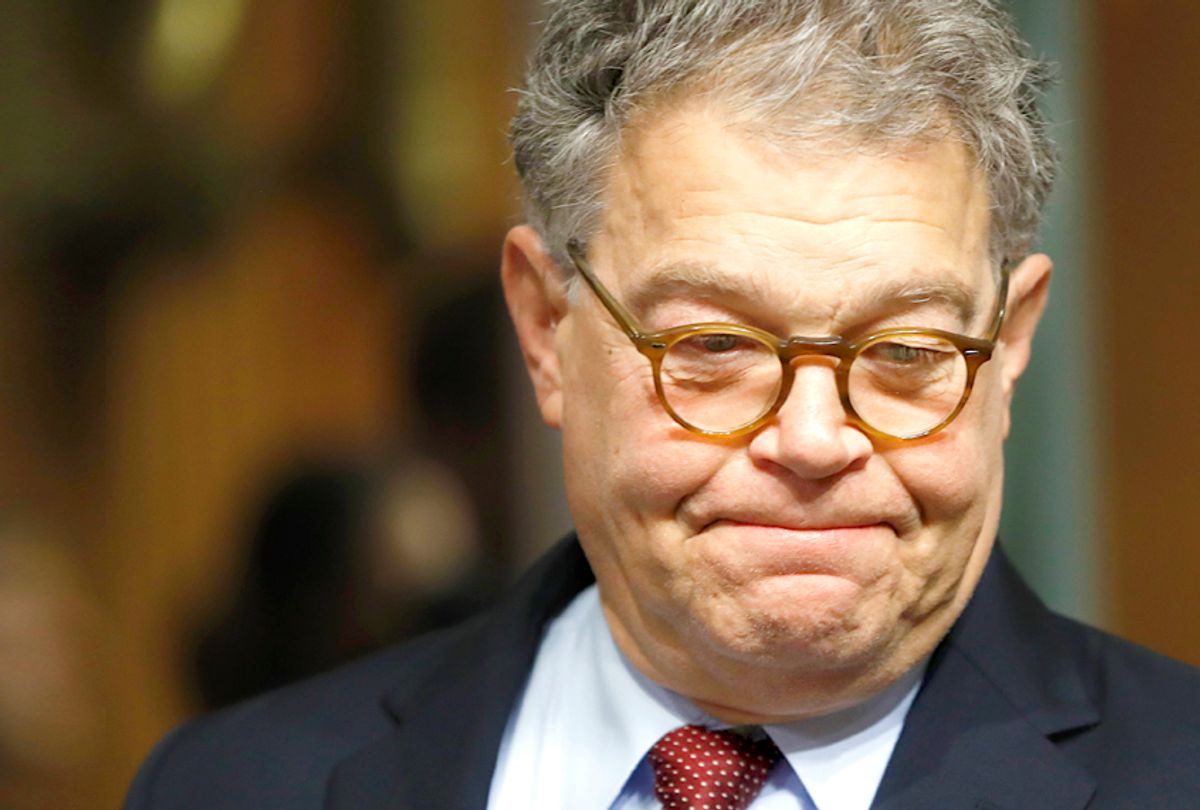 Sen. Al Franken, D-Minn., released a new apologetic statement in which he welcomed an ethics investigation into his behavior after he was accused by Los Angeles news anchor, Leeann Tweeden, of kissing her without her consent and later groping her while she was asleep, in 2006.

"I'm sorry," he writes. "I respect women, I don't respect men who don't. And the fact that my own actions have given people a good reason to doubt that makes me feel ashamed." He adds, "I am asking that an ethics investigation be undertaken, and I will gladly cooperate." Senate Majority Leader Mitch McConnell, R-Ky., was the first to call for an ethics investigation into Franken on Thursday.

"As with all credible allegations of sexual harassment or assault, I believe the Ethics Committee should review the matter," McConnell said in a statement. "I hope the Democratic leader will join me on this. Regardless of party, harassment and assault are completely unacceptable — in the workplace or anywhere else."

NEW: @SenSchumer on Al Franken: “I hope and expect that the Ethics Committee will fully investigate this troubling incident, as they should with any credible allegation of sexual harassment.” https://t.co/aDkmC6puqy pic.twitter.com/k4VOtQgbw9

In his statement, Franken maintains that he "did not remember the rehearsal for the skit as Leann does," when she alleged he "put his hand on the back of my head, mashed his lips against mine and aggressively stuck his tongue in my mouth." Franken adds that he understands "why we need to listen to and believe women's experiences."

As well, he admits that the picture that was taken of him grabbing Tweeden's breasts while she was sleeping, was inexcusable. "For instance, that picture. I don't know what was in my head when I took that picture, and it doesn't matter. There's no excuse. I look at it now and I feel disgusted with myself. It isn't funny," Franken's statement continues. "It's completely inappropriate. It's obvious how Leeann would feel violated by that picture. And, what's more, I can see how millions of other women would feel violated by it — women who have had similar experiences in their own lives, women who fear having those experiences, women who look up to me, women who have counted on me."

Overall, there's the spine of a passable apology here, but one that also contains a problematic passage. "Coming from the world of comedy," Franken wrote, "I've told and written a lot of jokes that I once thought were funny but have come to realize were just plain offensive. But the intentions behind my actions aren't the point at all. It's the impact these jokes had on others that matters. And I'm sorry it's taken me this long to comes to terms with that." You'd be forgiven for hearing echoes of Louis C.K.'s questionable confession to his own sexual misconduct there.

It's also almost an exact mirror of a statement he offered in 2008 while responding to critiques of the sexually explicit leanings of his humor. "It kills me that things I said and wrote sent a message," he wrote at the time. He apologized for the impression that, given his past jokes, his supporters "can't count on me to be a champion for women, for all Minnesotans. I'm sorry for that. Because that's not who I am."

Complicating Al Franken's predicament is the fact that this isn't his first public apology. Here's a 2008 flashback pic.twitter.com/HCZBDVJpEz

Reactions to the news across the political spectrum came fast and furious Thursday morning and early afternoon. Calls for investigations from Congress members, demands for resignation from citizens and media outlets, rants by gleeful conservatives, peals of despair and denial from liberals and off-tone jokes lit up Twitter as did the hashtag #AlFrankenResignNow.

Re Al Franken: I’m shocked and concerned. The behavior described is completely unacceptable. Comedy is no excuse for inappropriate conduct, and I believe there should be an ethics investigation.

.@SenWhitehouse tells reporters: “You guys need to find something more interesting” when asked about Franken allegations.

The @NRSC now calling for Dems who received money or fundraising help from @SenFranken to return the $$$ — Garrett Haake (@GarrettHaake) November 16, 2017

The Franken accusations are leading left of center websites, liberal commentators are calling on him to step down. pic.twitter.com/lyLsRNsqRF — Tom Kludt (@TomKludt) November 16, 2017

We have only one solution left: robot politicians. — Ben Shapiro (@benshapiro) November 16, 2017

Al Franken should resign. Roy Moore should drop out. Bill Clinton should stop talking. And we should elect some more damn women. — Emily Farris (@emayfarris) November 16, 2017

The news comes amid rampant sexual abuse allegations surrounding power players in Hollywood, figures in the media and even unnamed former and current male lawmakers on Capitol Hill. The bombshell now shares headline space with the fervent debate over the sexual harassment and assault allegations levied against Alabama Senate candidate Roy Moore.