"We don't negotiate with terrorists" and other myths you were taught 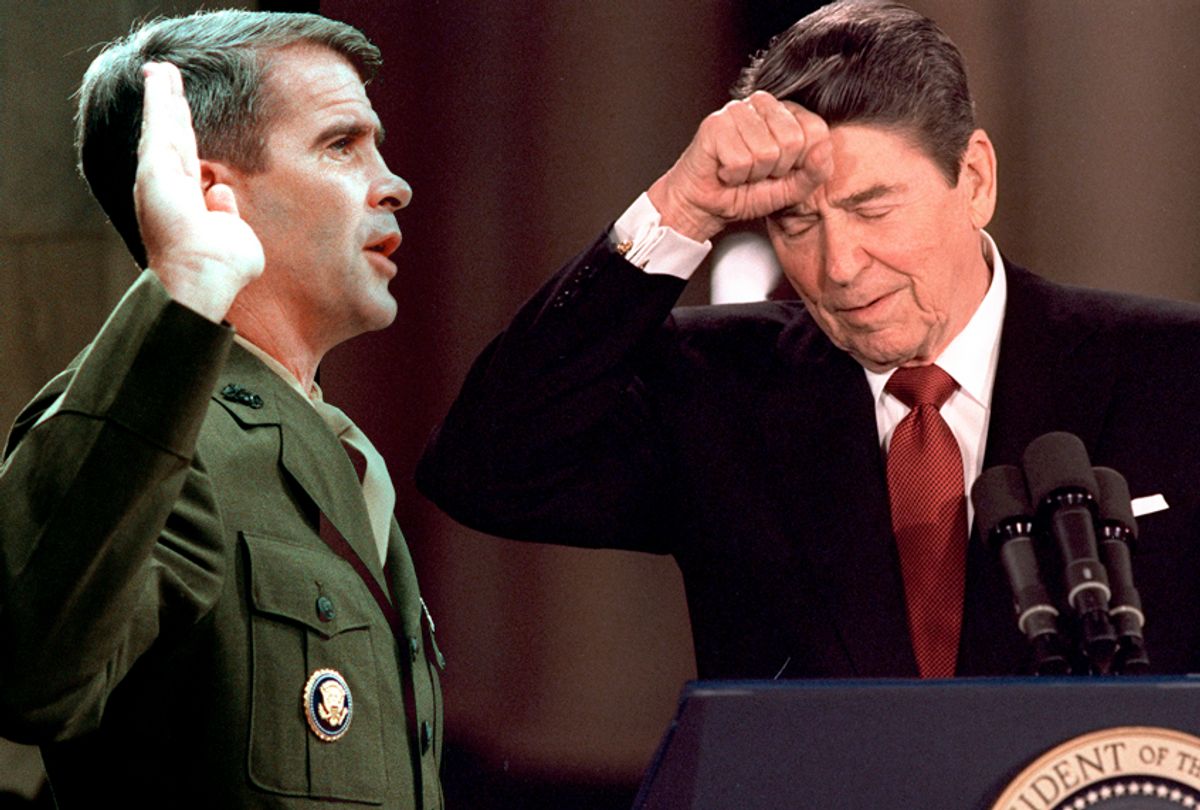 Excerpted with permission from "Lies, Half-Truths, and More Lies The Truth Behind 250 'Facts' You Learned in School (and Elsewhere)" by Herb Reich. Copyright 2017, Skyhorse Publishing. Available for purchase on Amazon, Barnes & Noble and IndieBound.

The U.S. government has a firm policy never to deal with terrorists—never ever. Until, that is, a deal is made.

One particularly notorious exception occurred in 1986, when President Reagan facilitated the sale of arms to Iran—though an embargo on such sale was in force—and used that income to finance the Contras opposing the communist Sandinista government of Nicaragua—which was also illegal, and specifically forbidden by Congress. But President Reagan considered the Contras to be “the moral equivalent of our founding fathers,” even though they had a long history of disregard for human rights.

The episode became known as the “Iran-Contra affair,” the arms transfer to Iran intended as a quid pro quo for the release of hostages held in Lebanon by a group tied to the Iranis. The Contras were not an intact force, but a cluster of several right-of-center Nicaraguan groups allied only in their opposition to the left-wing government. A report commissioned by the State Department found Reagan’s assertion of Soviet influence in Nicaragua to be “exaggerated.” The two activities were independent covert operations, related only by propinquity.

The International Court of Justice found that the US had violated international law by supporting the Contras, by mining Nicaragua’s harbors, and by encouraging violation of humanitarian law in its publication and distribution of the manual Psychological Operations in Guerilla Warfare. The manual, among other things, rationalized killing civilians.

It was a complex arrangement, both supporting and opposing insurgencies. Both, however, contrary to explicit US policy.

2. United Nations Location: The property in New York City on which the United Nations is built was donated to the UN by John D. Rockefeller as an expression of his philanthropic largess.

There may have been an altruistic component to Rockefeller’s benevolence, but his proposal to donate the land was more a business decision.

The seventeen acres on which the UN complex was constructed had previously been an area of slaughterhouses and a railroad garage, all accumulated by land developer named William Zeckendorf, one of Rockefeller’s most zealous competitors. Zeckendorf had purchased the land with the intention of constructing a city-within-a-city to rival Rockefeller Center, a district for business, tourism, and cultural activity, a “dream city” with its own transportation system and distinctive design. His plan called for a multimillion-dollar complex of several office buildings, hotels, and apartment houses, supported by theaters, shopping areas, a marina, and, of course, a rooftop airport. He anticipated a major impact on New York City with the relocation and absorption of the Metropolitan Opera and a floating restaurant/nightclub. Such a zone would surely diminish the distinctive allurement of Rockefeller Center as a place to visit and do business in.

But like many of Zeckendorf’s expansive schemes, his financing didn’t keep pace with his implementation and he soon developed money problems. Which gave Rockefeller the opportunity to advance his reputation for civic responsibility while at the same time eliminating likely business competition. Nelson, John D.’s son, managed to buy the seventeen acres for $8.5 million and the senior Rockefeller donated it to the UN, for which he took on a whole new reserve of renown as the American who gave the United Nations its home.

3. The Death of Diana: Princess Diana died in an auto crash, caused by overzealous paparazzi trailing hers in other vehicles.

In July 1981, Lady Diana Spencer wed Prince Charles, heir to the throne of England. Affectionately known as Princess Di, she became the darling of the English people: she was young, attractive, and brought vitality to the otherwise stodgy British royal family. The marriage was not happy but it produced two sons and was maintained for propriety’s sake. Meanwhile, Diana had a five-year affair beginning in 1986 with her sons’ riding instructor, Major James Hewitt. She and Charles separated in December 1992, and divorced in August 1996.

Following her divorce, Diana retained a high level of popularity. She devoted herself to her sons and to her charitable endeavors, staying in the public eye through reports of her relationships with several men. But in 1997, she found the man she considered her true love—playboy Dodi Fayed, owner of Harrods Department Store in London. On holiday in Paris, just after midnight on August 31, 1997, Diana and Dodi left the Ritz Hotel in a black Mercedes followed by a clutch of photographers. Driver Henri Paul was able to outrun most of them, but in an underpass at the Pont de l’Alma, driving over 100 miles per hour, he crashed into a concrete post, killing himself and Dodi and sending Diana to the hospital in critical condition, where she later died.

A French investigation concluded that the paparazzi were distant from the Mercedes and were not responsible, but “the driver of the car was inebriated . . . not in a position to maintain control of the vehicle.” A British inquest also attributed the accident to gross negligence by driver Henri Paul, who was found to have a blood alcohol level three times the legal limit. The paparazzi were exonerated.

4. Hamilton and Burr: Alexander Hamilton and Aaron Burr, who faced off against each other in what was probably the most famous duel in American history, were lifelong adversaries.

Hamilton and Burr were both lawyers, frequently on opposite sides in legal actions. They were also political opponents. Hamilton is quoted as observing that they “had always been opposed on politics but always in good terms.” Others in their circle did not see them as quite so conciliatory. But there was one trial that had them working together as co-counsels.

It is remembered as the Manhattan Well Murder case of 1800 in New York; incidentally it is the first murder trial in the United States for which a recorded transcript exists. A young man named Levi Weeks was accused of killing Gulielma Sands, a young woman he had been dating. She disappeared on December 22, 1799; her body was found in a nearby well, from which it was recovered eleven days later. Before leaving her boarding house on the night she disappeared, Gulielma had told her cousin she was planning to elope with Levi Weeks that evening.

Through his influential brother’s connections, Weeks retained Aaron Burr and Alexander Hamilton, two prominent attorneys, to defend him. Ezra Weeks was a wealthy contractor who had Burr and Hamilton as clients. Both were in debt to Ezra and he called in those favors. But Hamilton and Burr were commercial lawyers, neither having had much contact with murder cases before, so they took on a third attorney, an experienced criminal lawyer named Henry Brockholst Livingston. The trial lasted two days, the jury’s deliberation only five minutes to acquit Weeks.

So at least on one occasion Hamilton and Burr had worked together as co-counsels on the same side only four years before their historic duel.

5. Foreign Aid: The United States’ moral and humanitarian leadership of the world is shown by our supremacy among the world’s nations in providing foreign aid to those nations that most need it.

In 2014, the latest year for which data is available at the time of this writing, the United States donated the most foreign aid of all countries, $32 billion. But that figure is not so impressive when viewed as a percentage of the gross national income (GNI); it is only 0.19 percent, the same as Portugal and Japan. Several other countries contributed a much higher share.

A target of 0.7 percent of GNI had been established as an official development assistance (ODA) by the UN in 1970, that level of ODA/GNI accepted by the twenty-nine members that later signed on to the OECD’s Development Assistance Committee (DAC). The EU members that were in the DAC agreed to reach the target by 2015. By 2014, five had succeeded. Sweden led the pack, donating 1.1 percent of its GNI to foreign aid. Luxembourg donated 1.07 percent, Norway 0.99 percent, Denmark 0.85 percent, and the UK 0.71 percent. Among those countries that didn’t make the target were Germany at 0.41 percent, France at 0.36 percent, and Switzerland at 0.49 percent, all still significantly more than the US.

But the country that donated the most to foreign aid, measured as a percentage of GNI, was the United Arab Emirates (not in the DAC), which contributed an impressive 1.17 percent.

The picture changes if we include nongovernmental aid. The Hudson Institute, a private think tank, estimates private assistance for 2014 at $71.2 billion. That figure, though, is in dispute by some authorities because it includes $47 billion in foreign individuals’ remittances to family members. Excluding that item, private aid comes to $24 billion. Added to governmental foreign aid, that brings the sum of US foreign aid to $56 billion, or 0.34 percent, still not even in the top ten.