A definitive new Blu-ray release of Orson Welles’ "Othello," with the perfect Iago for our age 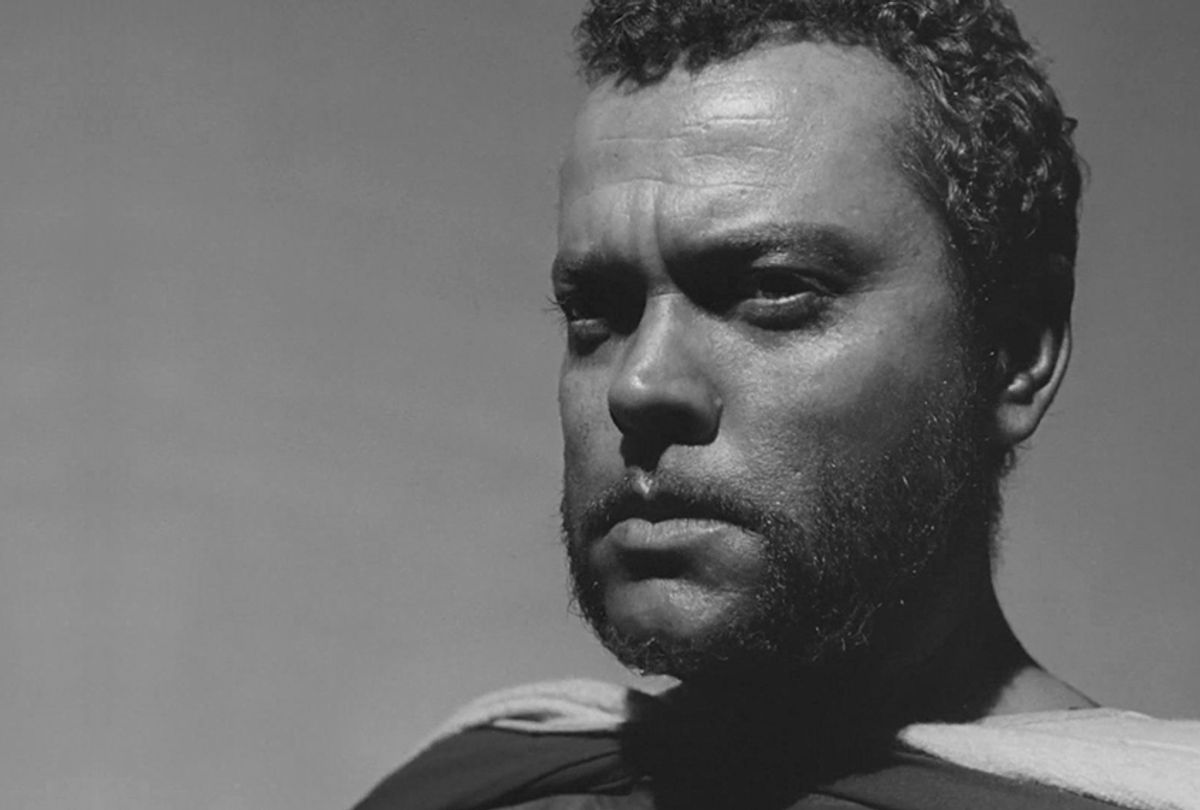 Each day of my life I learn something new from Orson Welles. What’s more, each day I learn something from a long time ago that one could easily conclude would not have relevance now, but which ends up being more germane to how to live, and live better, than anything encountered in the news cycle or on social media.

These pieces of knowledge can come from Welles’ films, his radio dramas, or the many interviews he gave in a style that elevated would-be persiflage to sure-fire art. Welles understood the art of endurance, having been kicked out of the Hollywood system and forced to find ways — many of which ventured into the realm of the comical — to fund his film projects that not a lot of people believed in.

He also understood the art of prescience, being so in tune with your environment and its times — even the hellish aspects for you, personally — that you became that rarest of person: one who can take several steps back from any situation and understand the motives and the foibles of the people who comprise that particular situation such that you are able to apply that knowledge to future situations, future crises, future people who would hold you back, all while expanding what is most crucial to each of us as individuals. That being, of course, your own personal growth and understanding of who you are. From there, everything else gets built: your best relationships, or, if you’re possessed of genius, as Welles was, your best art.

Criterion’s recent Blu-ray release of 1952’s "Othello" is big news for Welles people. The film has had a dire existence on home video, with a roundly criticized version having come out in 1992. But then again, struggles have always been common in the history of "Othello."

Shooting ran from 1949 to 1951, with myriad stops, because Welles kept running out of money. He was shoehorning a film into theaters from basically zero budget, the money for the project largely coming from his acting roles, which he then poured into what I’m going to call one of his best pictures.

You’ve perhaps heard some of the production horror stories and resulting ingenuity: Some costumes never turned up, so one scene was relocated to a Turkish bath, with towels “borrowed” from a hotel. Welles himself remarked that if you saw the back of an actor, you can bet that that was not the actor billed in the credits. A bellboy who was the right size might have been roped into the mix. What a mess all of that footage must have looked like when Welles began work on it with his Moviola editing device. Disparate piece after disparate piece, an orgy of incongruity, and how the hell does one even shoot in that manner and keep everything more or less straight?

You can’t storyboard it, because you’re improvising too much, with each change affecting how you’re going to have to edit what you’ve already shot, and quashing the plans for what was to come next, so that you’re always, in a way, writing. But you’re not overhauling some penny dreadful or pulpy churner that some hack blasted out in a morning. No, this is the freaking Bard. Who is going to red-pen Shakespeare like some coffee-addled middle school English teacher grading late at night, altering the dynamics of scenes and relationships? I look at it this way. There are grapes, there are oranges, and there are grapefruits. Orson Welles, the editor-cum-artist, had grapefruits.

I have a millennial friend who is quite smart, and very fond of buzzwords. We were talking about how I was writing about "Othello" and Welles, when she told me that she had never seen the film (to be expected), or read the play (less expected), didn’t really know who Welles was (totally expected), but wasn’t he white and oh no, oh dear, please, please tell me he did not film in blackface?

I responded that he used makeup, this person from this different age who always over-used makeup because he was embarrassed by his own appearance when he was acting, that Welles did so much for civil rights before the formal Civil Rights movement, that he had launched a brilliant all-black cast version of "Macbeth," and that trying to make one’s self look more Moorish is not the same as partaking of the vile, dehumanizing rituals of blackface. And it was just a different time, a world that would be every bit aghast at things that we find hunky dory in our world. That works both ways.

Now, you might say that the old world has passed and the new one is relevant, but this one will pass, too, and it is all put forward, eventually, to be adjudicated by history and reality, the co-ruling judges. But my friend had made up her mind, here in Gotcha Culture: This person who did not know much about Welles, who had not read "Othello," who would never see this cinematic version of it, had branded Orson Welles a racist. She then posted something on Facebook, like she had caught a criminal.

The less people know about things they think they ought to know about, the more they partake in Gotcha Culture. This is no more mature than tattling when you’re 5, but it’s worse than tattling; it’s like being a tattler who delights in setting someone up, so that you’re complicit in behavioral patterns, just so you can then do a carpet-yank -- out goes that rug, down they come, and there you are to yell “gotcha” and bring in the Feds. Which, when you’re 5, means mom and dad.

People are so wrapped up in internalized shame over what they don’t know. That they aren’t familiar with the books they think they should be, the art on museum walls, films, poetry, theater — there’s just so much! To begin to master any of it, you have to work. That’s hard. Your college experience is only going to teach you about a handful of works of art.

What will you retain? Probably not a ton. Retaining takes work. That secret shame gets buried inside of us, as we focus on things that take little work: carping about the latest person who has been toppled from a pedestal, joining the echo chamber of political comments sections, always looking to chase the ambulance of societal sirens for what needs to be talked about, quickly, next, then left aside for whatever it is that comes next.

Someone like Welles, an expert on so many things, can become an enemy of the state — by state, I mean status quo. I sometimes wonder what the reaction to him would be if more people had knowledge right now of what his knowledge was. But to return to "Othello:" Micheál MacLiammoir was an old chum of Welles’ from Ireland. When they met, Welles was busy breaking on to the Irish stage, lying his way into roles. Lying about his age, doing anything he could to cajole his way into a production. MacLiammoir helped him out, nurturing the boy’s aspirations, giving him insight into the life he was pursuing.

When it came time to cast Iago in "Othello" a long time later, Welles reached out to his buddy, who said that Welles was too old and too fat. To which Welles replied, in essence, that aren’t we all.

In his script, Welles decided to write Iago as someone whose deeply buried shame stemmed from his impotence, his inability to partake of something that denotes some kind of a close connection. Coleridge would write that Iago was a character of “motiveless malignity,” but that always seemed off to me, especially in this landmark treatment of the character.

You can do something terrible for a reason that does not have to have any resonance beyond whatever purpose it serves in helping you look away from one of your own shortcomings. In Gotcha Culture, we so often bay at the moon, like dogs with snot and drool running down our faces, for people to lose their job. Do you notice how often we call for people’s jobs now? Roar! The mailman fumbled a package, he must lose his job, roar!

MacLiammoir’s Iago is an early Bardic dry run for Gotcha Culture, via Welles’ monitory genius. His motives have nothing to do with anything save wallpapering over, briefly, his own self-loathing, his feeling that he is missing out on something great. That is always the fear of the insecure person: that everyone else experiences this thing they do not, that they alone don’t have it. The reality is, of course, that hardly anyone has it, some just bluff it better than others, like Welles’ Othello does in his relationship with Desdemona, before Iago helps undo that relationship, mostly by helping Othello become Othello’s own worst enemy.

Othello himself is culpable in this, because he’s incapable of taking a step back, as Welles himself could, and doing that bit we talked about where you parse through the human nature and human foibles of a given situation. He is going down — in a heap, as they say.

The film, as you can plainly see in this now-and-forever definitive version (actually, you get two cuts differing by two minutes in run time) has elements of German Expressionism, with hard, arresting angles, perspectives that seem to come from around corners, from lying flat on the ground, or from vertiginous perches.

German Expressionism often makes a film feel dreamy, like it is happening in your head space. Time itself feels dislocated in Welles’ "Othello," as if leaving the costumes aside, we could be in any time period. As I sat through the film most recently, I half expected someone, between plotting, carping, rejoicing in someone else’s problems, to look at that upturned palm in front of them, elevated as they were orating, and stop to check a mobile device stuck there.

As for Iago and his impotence: There are all kinds of ways in life, you find, not to be able to get it up. All kinds of occasions we feel we ought to rise to, that we do not. Often, the swords come out, because while we have no problem, it seems, letting others down, that idea of facing ourselves when we’ve done so is the kind of entreaty that MacLiammoir’s Iago hated above all, as many people do now, too. Pity they don’t make pills for that.