"Baltimore Rising": Questing for justice from the ground up 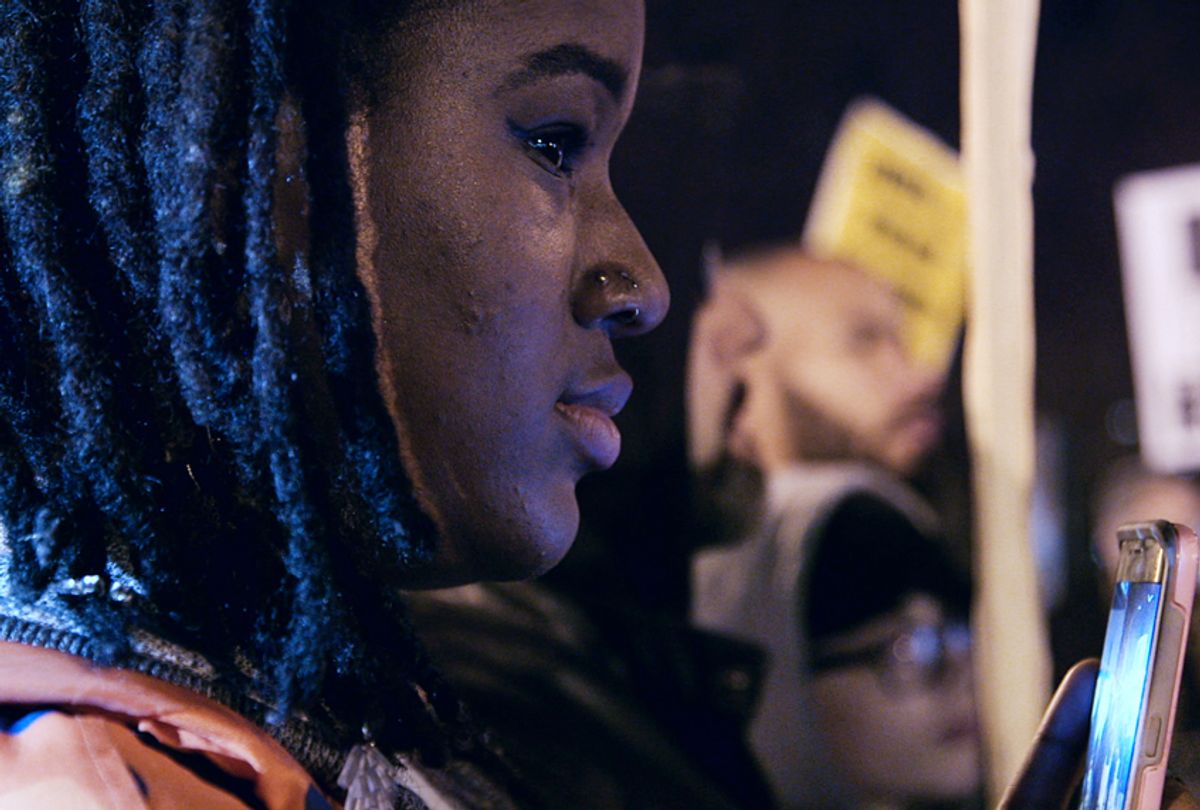 Do not be surprised by any bubbles of frustration that may surge within you while watching Sonja Sohn’s documentary “Baltimore Rising.” Do not let that stop you from watching it either, despite its fragmented presentation of narratives that meet at some junctures but rarely blend neatly.

In taking on the chronicling of around a year of Baltimore’s black community in the wake of 25-year-old Freddie Gray’s death in April 2015, Sohn has the fraught task of finding connections between numerous opposing forces. And she’s able to do this with some measure of grace, even as the film presents no neat conclusions beyond an ambiguous, fragile sense of hope.

“Baltimore Rising,” debuting Monday at 8 p.m. on HBO, cannot ameliorate the unsatisfactory outcome of Gray’s case. The passion of activists and organizers seen in “Baltimore Rising” and the challenges faced by Baltimore authorities struggling under a cloud of corruption seems to net very little by the end of the documentary’s 93 minutes. Even the young Makayla Gilliam-Price, one the most fired up among the leaders of this nascent movement, admits that the protests to which she devotes herself make an impact in the community but have no concrete strategy attached.

“It’s not the most productive option,” she observes.

But the lines between a tragedy and a just outcome are rarely straight, and those familiar with the fates of the six officers involved in the events surrounding Gray’s death while in police custody already know it as a case of justice denied. Despite this truth, the film’s portrayal of what one man refers to as the theater surrounding the trial, creates an effective study of activism, collaboration and the corrosion of racial and economic inequality from the ground up.

Sohn is probably best known to viewers as Detective Kima Greggs from David Simon’s extraordinary drama “The Wire,” but her desire to create “Baltimore Rising” stemmed from the five years she spent as a co-founder of a nonprofit dedicated to assisting young parolees called ReWired for Change. When Gray’s death sparked riots that burned through Baltimore’s streets, Sohn was on the ground with the cameras rolling not long afterward.

Her knowledge of the community enabled her to find an array of interesting, imperfect subjects who lead her through this complicated story with a measure of authority. Their candor allows “Baltimore Rising” to view Baltimore as a microcosm of activism, both from the broad lens of strategy and tighter stories with personal stakes. And while this fleshes out the documentary’s examination of resistance and collaborative effort, it also balances this with the hard truth that the fruit of most individual protests is not harvested by their participants in the short run.

Sohn assembles an array of captivating subjects in “Baltimore Rising,” some of whom immediately hook the viewer. Gilliam-Price is a stand out, thanks in no small part to her youth and broad knowledge regarding civic and political engagement; she’s a high school student seen teaching first-time protesters, who are much older than her, about the effectiveness of various tactics.

On the other side is Police Commissioner Kevin Davis, who assumed his role following Gray’s death and is seen engaging with representatives from the community in an effort to change the toxic perception of his department.

But although Sohn shows him in meetings, demonstrating that the will may be there, a brief history lesson within the documentary implies that any impact he’s able to make will be mildly analgesic at best. Men such as Lt. Colonel Melvin Russell, seen in day-to-day interactions with families in the community as well as on the blue side of the line during protests, represent the hope Sohn clearly has. As the camera shows us when other officers such as Dawnyell Taylor cheer the acquittal of an accused colleague, transformation is going to take much more than the efforts of a few men and women in law enforcement walking the streets of their community.

Davis and Russell explain that the problem is systemic and entrenched: Officers don’t feel safe doing their jobs, so they either don’t get out of their cars or they fear for their lives when they do and react accordingly.  Men and women in the community, meanwhile, learn from a history of over-policing that the system holds little real chance of justice for them. Davis and the community members he works with spell out the solutions for Baltimore’s problems in a way that make sense. He points out that in order for there to be genuine change in poor communities of color, other governmental departments need to pull together to help people access affordable housing, gain employment that can support families and improve the educational system.

“If folks are waiting for the police departments of America to do it,” he says, “they’re going to be out of luck.”

There’s a moment of lightness in the midst of the documentary where local cops and members of the community play a football game, organized by ex-gang member Genard “Shadow” Barr. It’s a PR opportunity for Davis’s department and a temporary relief for the community that cools the narrative’s simmer somewhat. Whether this is a welcome detour or unnecessary to the story depends, I suppose, on the viewer’s emotional state.

“Baltimore Rising” is more effective when it challenges our notion of a leader’s role, especially as they pertain to social movements. This plays out directly in the story of Kwame Rose, who inadvertently became the face of a movement when his angry confrontation with Fox News’ Geraldo Rivera indicting the national media’s coverage went viral.

Throughout the documentary, we see Rose willingly put himself on the front lines and provoking police into arresting him, but Sohn doesn’t shy away from showing his astounding naivete and aimlessness. In one scene, his parents ask him to stop protesting and think about his future. He refuses, telling them, “I don’t think about long term. I don’t really have a longing for material possessions.”

His mother and father translate this for him: “You’re homeless,” his mother says. “You’re broke,” adds his father. To which Rose stubbornly replies, “I don’t want responsibility.”

There are many such moments of human frailty and humor in “Baltimore Rising, and Sohn presents all of it without specific judgment or an agenda beyond capturing as many voices as possible and corralling them as efficiently as possible. Such an approach may be frustrating for anyone searching for a concrete message at the center for “Baltimore Rising.” There isn’t one, but many. Listening to each of them may be a small step toward resolution.