Roy Moore accuser Leigh Corfman on "Today" show: "I was a 14-year-old child"

Corfman, who says she was 14 and Moore 32 when he pursued her, tells all in new "Today" show interview 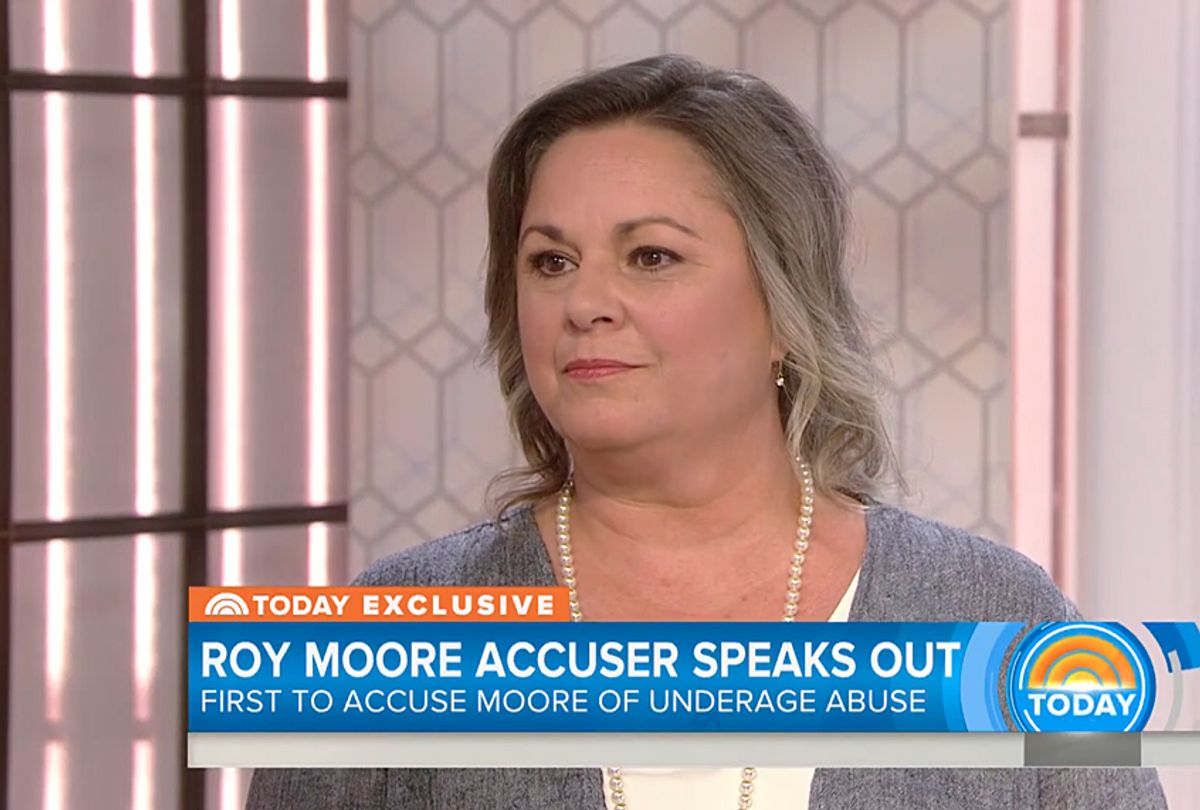 In Leigh Corfman's first television interview since she accused U.S. Senate candidate Roy Moore of molesting her when she was 14 and he was 32, she spoke of the residual and long-lasting trauma of surviving the alleged sexual assault.

"It took away a lot of the specialness out of interactions with men. It took some trust away,” she told "Today"'s Savannah Guthrie. "It took years for me to regain a sense of confidence in myself, and I felt guilty. I felt like I was the one that was to blame. It was decades before I was able to let that go."

Corfman also described the devastating experience of telling her children of the alleged assault, as part of the ongoing discussion among her family and friends on whether she should come forward with her story. She said her children feared they would be ostracized socially and that she had to decide between choosing justice for herself and protecting her family.

"My children were small, so I didn't do it," Corfman said. She added that the second time she thought about speaking out, she "gave them the ability to make the decision. They were afraid that with all of their social connections that they would be castigated in their groups . . . We decided together that we wouldn't do it at that time." Corfman is a single mother.

She also addressed the financial effects of going public. Corfman has taken a leave of absence from work, and contrary to some more conspiratorial reports, she confirmed that she's received no money for her allegations. "If anything, this has cost me," she said. "I have no tickets to Tahiti and my bank account has not flourished. If anything it has gone down because currently I’m not working."

Acknowledging the blame and disbelief victims of sexual assault often experience, Corfman said when The Washington Post found her and asked her to come forward, she said she would do so only if they discovered there were others. They did. At this time, eight women total have accused Moore of sexual harassment or assault. "I didn’t go looking for this, this fell in my lap," Corfman said. "It literally fell in my life, and I had to make a decision."

Corfman described her encounter with Moore in detail during her interview. She said Moore approached her outside an Alabama courthouse and asked for her phone number, when she was 14 and waiting for her mother, who was inside. Corfman said Moore later picked her up and took her back to his house.

Corfman said the second time Moore took her to his house, he laid blankets down on his living room floor and attempted to seduce her. She added that Moore removed most of her clothes and left the room and returned in his "white underwear" only. "He touched me over my clothing, what was left of it," she said, "and he tried to get me to touch him as well." It was then when she felt uncomfortable and told Moore to take her home. "I was a 14-year-old child trying to playing in an adult’s world, and he was 32 years old," she said.

Corfman said she immediately told several friends and all confirmed the behavior was inappropriate. She avoided seeing him again and made excuses when he called.

Of her response to Moore's denial of the allegations, and specifically that he does not even know Corfman, she said, "I wonder how many ‘me’s’ he doesn’t know."

See the whole interview below.