With the recent election results, Republicans will have to reevaluate their kowtowing to Trump 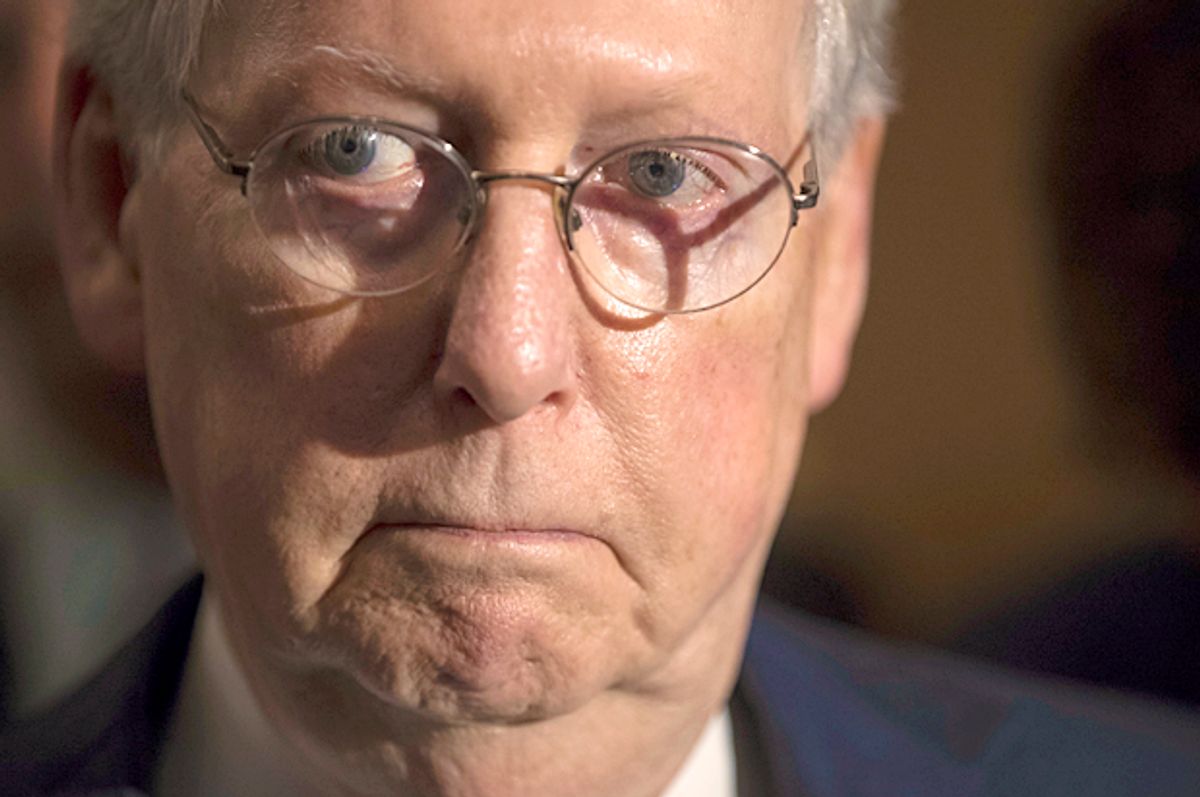 It profits a man nothing to give his soul for the whole world... but for Trump’s base?

If Sir Thomas More were alive today, that’s what he might say about congressional Republicans who gave their political souls in exchange for Trump’s support because they thought they needed it to be reelected. They have been held hostage by Trump’s popularity with his base and his grip on the swing vote. But after last week, that grip looks a lot looser.

Much has been written about how the 2017 election results bode well for Democrats, but comparatively little about how it could also guide Republicans. Progressives shouldn’t pin their hopes for restoring functionality to government solely on Democrats taking back Congress in 2018. Whether they do or don’t, Republicans will also need to be part of the solution.

It remains to be seen whether they have learned it, but the lesson for Republicans from their losses in Virginia, New Jersey and across the countryshould be clear: they don’t need to placate Trump to keep their seats. Senators Jeff Flake and Bob Corker decided not to run for another term because they weren’t willing to cozy up to the president and thought they couldn’t win without doing so. Perhaps they’ll reconsider that now.

Trump’s coattails were never long to begin with, and are now fraying. The 2016 election was decided by just 0.09 percent of all votes cast. A total of 107,000 votes gave Trump Michigan, Wisconsin and Pennsylvania and the presidency. He won in those states and Florida, by less than 2 percent.

Trump still has strong support from his base, with the latest CNN poll showing 85 percent of Republicans approve of him. In stark contrast, only 20 percent approved of Republican congressional leaders as of late September. Trump’s blaming them for failure to pass legislation apparently worked, which may help explain why they have been so deferential to such a dysfunctional president.

They’ve even gone so far as to introduce a resolution asking special counsel Robert Mueller to recuse himself from investigating whether Trump’s campaign colluded with Russia. This is pure political kowtowing, flying in the face of the Manafort and Gates indictments, the Papadopoulos plea and the targeting of Flynn.

The question is, will congressional Republicans continue to appease Trump given the 2017 election results? Or will more of them stand up to him?

Will they continue to tolerate Trump’s unprecedented conflicts of interest? He holds stakes in roughly 500 international businesses, many in countries where he must negotiate trade and other agreements. The conflicts are so serious that the Office of Government Ethics director couldn’t abide them and resigned, while Republicans just stood pat.

Will they challenge Trump’s cascade of lies, such as “I have nothing to do with Russia…no person that I deal with does”? What about Paul Manafort, Donald Trump Jr., Jared Kushner, Carter Page, Michael Flynn, Roger Stone, Rick Gates, and George Papadopoulos and Betsy Devos’ brother, Erik Prince, the billionaire founder of Blackwater?

Will they push back when Trump winks at racism? Congressional Republicans soft-pedaled his support of white supremacists at Charlottesville and his pardon of Arizona Sheriff Joe Arpaio, who housed Latino prisoners in 110-degree “tent cities,” and boasted that they were “concentration camps.”

Will they finally admit that Trump’s poor character is the core problem, and that, as the Economist opined, “he does not have the character to change”? Republicans, on the other hand, have changed since Trump was elected. They’ve retreated from core positions on trade and security.

Republicans championed the benefits of free trade for decades. NAFTA was negotiated by Republican president George H.W. Bush and passed with mostly Republican votes. Republicans also supported the Trans-Pacific Partnership trade agreement, which Marco Rubio wrote would “further our strategic goals in Asia and increase prosperity at home,” and Pat Toomey applauded TPP as a boon to economic growth and job creation. Yet Trump’s tirades against free trade—probably the biggest issue that won him the presidency—cowed many congressional Republicans into doing nothing as Trump abandoned the TPP.

They acquiesced as Trump weakened America’s ability to communicate, lead and influence on the world stage. He exited the Paris climate accord. He cut the State Department’s staff. He confused NATO members as to America’s commitment to defend its European allies. Now our allies in Southeast Asia worry that Trump, desperate for a win, will make a deal with China that emboldens it to bully its neighbors, further endangering our relationships in the region.

All this has left a vacuum Russia and China are now moving to fill. They are expanding their geopolitical and military reach around the world and excluding us from new global trade relationships. That's a threat to U.S. security. It undercuts our ability to fight terrorism and maintain peace in regions where tensions are high.

While the 2017 election results are heartening for Democrats, they should also be heartening in a different way for Republicans who have been stuck in Trump’s political chokehold. They should feel somewhat freer to speak honestly about their president and work to repair the damage he has caused. Pandering to Trump won’t get them reelected, and even if it did, it still wouldn’t be worth the divisiveness, dysfunction and the loss of influence and respect America has suffered.