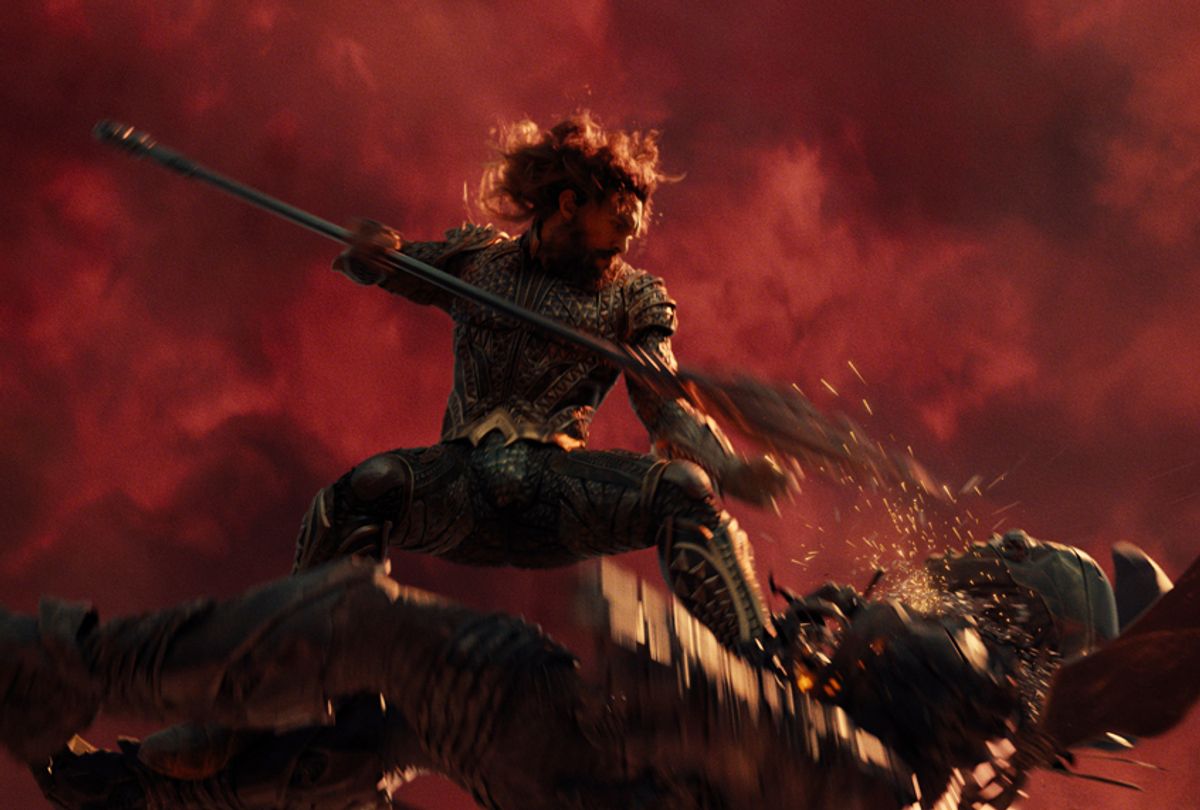 It always seems strange to declare a movie a “failure” for making just shy of $100 million dollars, but nevertheless, by the standards of modern mega-blockbusters, “Justice League,” DC’s aspiring “Avengers”-killer team-up film, was an abysmal failure, taking in “just” $96 million on its opening weekend. So, what happened?

Blame the switch-up of directors, the bleary color palette, the underdeveloped cast of new “meta-humans” like Jason Momoa’s Aquaman or Barry Allen’s Flash. Blame Henry Cavill’s weird upper lip, digitally de-moustached in a way that seemed laughably conspicuous to even inattentive viewers. Or blame the relative lameness of DC’s roster of do-gooders, who lack the depth and edge of Marvel’s best heroes. Or attempts to compensate for this lack of edge by making Aquaman, among the dopiest of DC heroes, a scowling, hirsute bad boy, whose full body tattoos manage to set perfectly despite his spending the bulk of his life underwater.

But if anyone should be saddled with responsibility for the apparent inability of “Justice League” to connect with critics and audiences, it’s DC-Warner’s own last-ditch action hero: Zack Snyder.

While I don’t count myself among them, Zack Snyder has his fans. Some are even clamoring for the studio to release the directors unexpurgated cut of the film. He is a competent stylist and visual imagineer, even when it feels like his directorial hallmarks — the speed ramping, the slo-mo shots of people being punched in the face, the gloomy montages set to covers of pop classics — play like parodies of themselves. Even when handed off to another filmmaker, and tampered with by the studio, watching “Justice League,” it is obvious that one is watching a Zack Snyder film. And even at their worst, his films invite a morbid curiosity, where the Marvel movies promise only polished competence and (increasingly) smart-alecky humor. (For my mind, the fabulous disaster that is Snyder’s “Batman v. Superman: Dawn of Justice” proves far more compelling, at least in theory, than the bulk of Marvel Studios outings.)

There is, however, a deeper disconnect between what Zack Snyder does and what the audiences for modern superhero movies wants. And it’s not a matter of the distinctive style, or even the ostensible (and often mangled, plot-wise) substance of Snyder’s cinema. It comes down to — what else? — his politics.

“There's no room for softness . . . not in Sparta,” says a one-eyed warrior in “300,” Snyder’s 2006 war-sploitation epic. “No place for weakness. Only the hard and strong may call themselves Spartans. Only the hard, only the strong.” It would, perhaps, be easy to excuse such lines — or indeed, the whole plotting of “300"; a story of war and conquest that plays like a de-ironized, utterly unpleasant riff on Paul Verhoeven’s space-fascist fantasy “Starship Troopers” — as proceeding from the film’s source text (Frank Miller’s graphic novel of the same name) or indeed, from the verifiably hard, strong, brutal history of ancient Sparta. But these words — “No room for softness! Only the hard! Only the strong!” — ring out like a gym mantra across Zack Snyder’s filmography, eddying into his dalliances in DC’s cinematic universe.

Snyder’s first DC movie, a 2009 adaptation of “Watchmen,” the grandaddy of “actually it’s a serious piece of art” comic books, fatally bungled the original authorial intent of author Alan Moore. Where the comic stands as a sustained critique of power and authority — and especially the power and authority wielded by traditional outside-the-law comic book caped crusaders — Snyder’s film feels more like an endorsement of authoritarianism. Moore hates the brutality and violence he depicts. Snyder savors it in pornographic slo-mo. Where the comic finds sympathy in the frailer, more recognizably human characters (like the impotent Nite Owl), Snyder’s world has no place for such softness. He’s more like the burly villain Ozymandias, holding such frailty in utter contempt.

In 2013’s “Man Of Steel,” Snyder and screenwriter David S. Goyer turned Superman into a distinctly far-right superhero. With repeated references to Superman’s godliness, and visual references to the passion and suffering of Christ, Snyder turned Superman into a patently obvious modern Jesus — albeit one with no problems with snapping an intergalactic super-villain’s neck. For Snyder’s Superman, such acts of violence are justified, so long as you look really, really pained while perpetrating them. In its bloated commingling of non-denominational Christianity and might-makes-right jingoism, all embodied in one of the most famous fictional character of all time, “Man Of Steel” was perhaps the perfect (or “perfect”) superhero film of post-9/11 America.

Snyder doubled down on his Superman-as-God shtick in “Batman v. Superman,” in which the Kyrptonian goes cape-to-cowl with Ben Affleck’s bat-suited vigilante, himself an extra-governmental mega-billionaire driven by his own wonky moral compass and self-interest, like a classic Randian hero. This a Batman who scowls stuff like, “the world only makes sense if you force it to” (Snyder was, reportedly, planning an adaptation of Ayn Rand’s objectivist instruction manual “The Fountainhead.” It would be, in its way, an ideal project for him). The film’s ostensible villain, Jessie Eisenberg’s hypomanic Lex Luthor, is the only character to question the benign role of power and the moral rectitude of self-appointed gods. Yet in the end, the seemingly all-powerful hero is struck down. God is dead. Until he’s not.

Where a different — though I hesitate to say “better — filmmaker may have used “Justice League” as an opportunity to explore the post-Superman DC universe, Snyder’s film opens in funerary mode, the world awash in heavy lament after the Man of Steel’s passing (The credits montage, this time, is scored to a version of Leonard Cohen’s “Everybody Knows,” a song about the wizened embrace of cynicism). Despite the proliferation of different super-powered heroes either directly figured or alluded to in “Justice League” — Batman, Cyborg, The Flash, Aquaman (and a whole subaquatic race of Atlantians), Wonder Woman (and a whole invisible island of Amazonians), the intergalactic Green Lantern Corps — the world still needs Superman to defeat the film’s big, bad, comparably godlike Steppenwolf, who plans to use a trio of magical boxes to turn the world into a searing hellscape (Given the drizzly depressiveness of the world Snyder establishes early on, one might reasonably see Steppenwolf’s geo-forming plan as an improvement).

Once again, Snyder relishes in the slack-jawed worship of power, like a flunky groveling before a Machiavellian Prince or a Hobbesian Leviathan. In “Justice League,” Ben Affleck’s aging Batman (his broken body all too human) berates Wonder Woman (Gal Gadot) for not inspiring people, for not turning herself into a symbol. Other heroes are similarly recruited to Batman’s League using direct, Randian tactics. He appeals to an immanent threat and so to their Randian “rational self-interest.” It’s only after Aquaman, Wonder Woman and Cyborg are directly threatened by Steppenwolf that they agree to join up (Flash is motivated more by his boredom, which is its own kind objectivist incentive). Saving the world isn't the right or just thing to do. It’s merely rational; a fitting course of action when forced to choose between the options of existence and non-existence.

Part of the modern appeal of the Marvel Cinematic Universe is its apparent altruism. In 2016’s “Doctor Strange,” Benedict Cumberbatch’s arrogant-surgeon-cum-sorcerer sees his own hubris and egoism crushed again and again in a time-looping boss battle. In the recent, and wildly successful, “Thor: Ragnarok,” the God of Thunder et al. risk their kingdom to load huddled civilians on an intergalactic spaceship to be sent adrift like a lost tribe. In “Justice League,” the heroes band together not because it’s the just or decent thing to do, but because if they don’t, well, they're screwed, too. The rabble of humans in Snyder’s DC movies need their heroes — as protectors, as objects of worship and awe. But one never gets the sense that the heroes really need humanity, beyond its ability to bolster their own power. They’re never just saving humanity. They’re saving humanity from itself.

The compelling wrinkle, for me, is that while Snyder’s vision of heroism may be cynical, downbeat, and crypto-fascist, it also feels weirdly justified. At the very least, Snyder seems to come by his ideological leanings more honestly than the helmers of the Marvel movies, who seem guided by a corporate interest to keep things light, fluffy, buoyant and ultimately optimistic. The election of a self-styled strongman/clown like Donald Trump — so often depicted by sympathetic editorial cartoonists as a Snyderesque Superman figure — suggests some dark truth to our desire to be governed, even by tyrants and idiots. The Marvel movies want us to believe that we can have heroes who shield us from evil and act as our burly protectors. Zack Snyder, meanwhile, has no apparent use for the very idea of heroism — this despite being one of the most prolific contemporary directors of superhero movies.

In staging such staunch, ideologically grim ballets of slo-mo, bone-cracking violence, Snyder’s movies invite not just contempt, but curiosity. In their spectacles of rational, righteous power and their kowtowing to the altars of authoritarianism, they encourage us to wonder, like the ranting Lex Luthor does in “Batman v. Superman,” if power can really ever be righteous, or even innocent. Judging by box office receipts, Snyder’s may not be the superhero movies audiences want. But perhaps they’re the ones we justly deserve.