The tale of Roy Moore, from Gadsden Mall to Ten Commandments monument 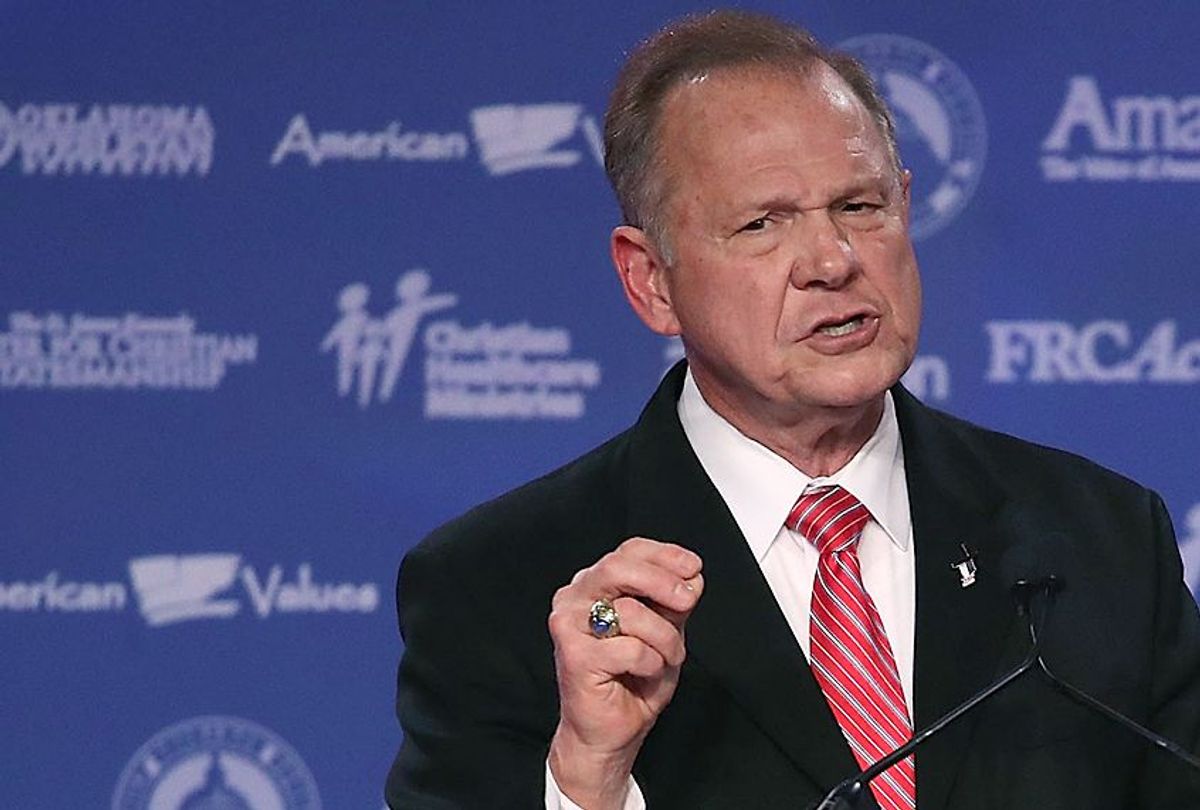 The spectacle of 30-something Deputy District Attorney Roy Moore cruising the Gadsden, Alabama, mall hunting for high school girls to chat up, grope and “date” rivets our attention, and deservedly so. Not everyone’s attention, of course. As CNN’s Brian Stelter points out, Alabama’s own media have long overlooked his depredations. Even last week, a local paper persisted in claiming that the ex-judge has “refuted” his accusers. (They meant “rebutted,” but even that isn’t true.) But the tide has turned. Alabama’s three major papers — The Birmingham News, Mobile Press-Register and The Huntsville Times — have endorsed Moore’s Democratic opponent, Doug Jones, and their shared website dares Moore to sue over what he calls “defamation.”

Still, for all the back-and-forth, most commentators stop short of noting that the defrocked Alabama chief justice belongs to a tradition and a culture. Proliferating stories of Moore’s life as a predator invite reflection on what he and Harvey Weinstein share in common: their privileged positions in a protective culture where men get away with whatever they can get away with.

No one outside a deep cave lacking Wi-Fi is altogether astonished to learn that honcho producer and Democratic moneybags Harvey Weinstein was a serial predator, and it’s become abundantly clear in recent weeks that Weinstein isn’t the only big or medium shot to cover up his crimes. Weinstein thrived in a world where physical attractiveness is a commodity and alpha (even beta) male gatekeepers relish opportunities to score, show who’s in charge, and silence anyone who might dare challenge them. There’s a reason why “casting couch” has been a cliché going back close to a century, even before Hollywood, when the couches in question ran along Broadway. Weinstein is of the crowd who cover up their crimes; Trump is one who sometimes bragged about their conquests; the leering Al Franken photographed in mid-grope has now been outed, too, as has George H. W. Bush for multiple surreptitious offenses.

Whatever the area dominated by males, the sin (often crime) is the same: flagrant abuse of power. We know a lot more about the sexual depredations when the perpetrators and the victims are celebrities — thus the great outpouring of publicity about the movie business, and about reality-show-mogul-presidents-to-be. But it’s to be presumed that the scandal of sexual abuse operates in every field, not least among those arrested by corrupt police, and by hotel housekeepers and waitresses, as Barbara Ehrenreich recently pointed out.

In his first race for Alabama’s chief justice, in 1999, Moore repeatedly insisted that Christianity’s declining influence “corresponded directly with school violence, homosexuality and crime.” About schoolgirl abuse and crime, at least, he knew whereof he spoke. Evidently Roy Moore was well known as a lurker — some reports say he was even barred from the Gadsden Mall. But then how did he enjoy so much prominence, respect and not least, electoral support over the succeeding decades? How come God-fearing Christian authorities failed to point withering fingers?

Why do believers who themselves have never done what Moore did support his election? It would seem to be relevant that Alabama is the state that has the fourth-largest number of married minors. The three that rank higher are Texas, Florida and Kentucky. The next three on the list are also Southern. But this is not only a Southern story. Early this year, New Jersey Gov. Chris Christie vetoed a law that would have banned marriages of under-18s, writing: “An exclusion without exceptions would violate the cultures and traditions of some communities in New Jersey based on religious traditions.” Note: “some communities.” Child marriage cuts across denominational boundaries.

A plausible answer to the question of how Roy Moore still enjoys Christian support has been set forth in a Los Angeles Times op-ed by Kathryn Brightbill, a courageous ex-Republican self-professed Christian, under the headline: “Roy Moore’s alleged pursuit of a young girl is the symptom of a larger problem in evangelical circles”:

We need to talk about the segment of American culture that probably doesn’t think the allegations against Republican Senate candidate Roy Moore are particularly damning, the segment that will blanch at only two accusations in the Washington Post expose: He pursued a 14-year-old-girl without first getting her parents’ permission, and he initiated sexual contact outside of marriage. That segment is evangelicalism. In that world, which Moore travels in and I grew up in, 14-year-old girls courting adult men isn’t uncommon.

Brightbill links the sexual exploitation of teens to this subculture’s theology — and practice — of training women to be subservient wives, which is sometimes gussied up with the fancy name “complementarianism.” Brightbill again:

As a teenager, I attended a lecture on courtship by a home-school speaker who was popular at the time. He praised the idea of “early courtship” so the girl could be molded into the best possible helpmeet for her future husband. The girl’s father was expected to direct her education after the courtship began so she could help her future husband in his work. In retrospect, I understand what the speaker was really describing: Adult men selecting and grooming girls who were too young to have life experience. Another word for that is ‘predation.’ … Much of the sexual abuse that takes place in Independent Fundamentalist Baptist, or IFB, churches involves adult men targeting 14- to 16-year-old girls. If caught, the teenage victim may be forced to repent the ‘sin’ of having seduced an adult man.

Other journalists have written about the tender treatment some churches mete out to men who beat their wives. Kathryn Joyce has written about mainstream-evangelical megachurches that do not regard wife-beating as legitimate grounds for divorce. One woman Joyce interviewed found herself ostracized by Rick Warren’s Orange County, California Saddleback Church, for having the audacity to get a restraining order against a husband who had, among other things, bashed her head against a car window.

In her op-ed, Brightbill names several so-called Christian celebrity predators and their defenders. One is Trump-loving reality TV Duck Dynasty star Phil Robertson, who “advocated for adult men to marry 15- and 16-year-old girls and deemed age 20 too old because “you wait until they get to be 20 years old, the only picking that’s going to take place is your pocket.” He just got a new show on the conservative digital network CRTV. Robertson claims to have lectured a rapt Trump on the gospel.

The evangelical world is overdue for a reckoning. Women raised in evangelicalism and fundamentalism have for years discussed the normalization of child sexual abuse. We’ve told our stories on social media and on our blogs and various online platforms, but until the Roy Moore story broke, mainstream American society barely paid attention. Everyone assumed this was an isolated, fringe issue. It isn’t.

The tradition thrives on — indeed, would seem to require — authoritarian training in circles where the 11th Commandment is: Thou must refuse to condemn the leader. So periodic personal scandals burst into public view—usually a matter of an unwanted laying on of hands—only to dissipate among the religious faithful. (There are exceptions among better known transgressors of recent decades: for example, the “bawl and jump” Billy James Hargis of the Christian Crusade, and Assemblies of God Minister Jimmy Swaggart, caught with prostitutes.)

One Baptist minister and theologian, Miguel de la Torre, goes so far as to condemn Evangelicals across the board:

Christianity has died in the hands of Evangelicals. Evangelicalism ceased being a religious faith tradition following Jesus’ teachings concerning justice for the betterment of humanity when it made a Faustian bargain for the sake of political influence. The beauty of the gospel message — of love, of peace and of fraternity — has been murdered by the ambitions of Trumpish flimflammers who have sold their souls for expediency. No greater proof is needed of the death of Christianity than the rush to defend a child molester in order to maintain a majority in the US Senate.

Harsh, sure, and painted with too broad a brush — there’s no evidence, for example, that British Evangelicals are killing Christianity. But don’t think American Evangelicals are alone in the casuistry of the cover-up. Don’t think any institution is immune to the depredations of toxic masculinity and the life-throttling maneuvers of (to use the columnist Heather Havrilesky’s term) the Sociopathic Baby-Man. The Catholic Church long and famously practiced its own tolerance for sex crimes in their priesthood — though their leadership did not offer up criminal priests as fit candidates for the world’s most respective deliberative bodies.

Christians are not alone; Republicans are not alone; Hollywood Jews are not alone. Motes and beams are stuck in eyes everywhere. Let the inventory continue, and the tallying of the toll taken in the lives of women by the far-flung abusers. As so many women rip off their gags and speak up, it will take an increasingly massive effort not to see how central these abominations are to civilization as we know it.

Thanks to Sarah Posner, Kathryn Joyce and Lynne Foote for help with ideas and research.

Todd Gitlin is a professor of journalism and sociology and chair of the Ph.D. program in communications at Columbia University. He is the author of 16 books, including several on journalism and politics. His next book is a novel, "The Opposition." Follow him on Twitter: @toddgitlin.