"She's Gotta Have It": Sexy, funny and right on time 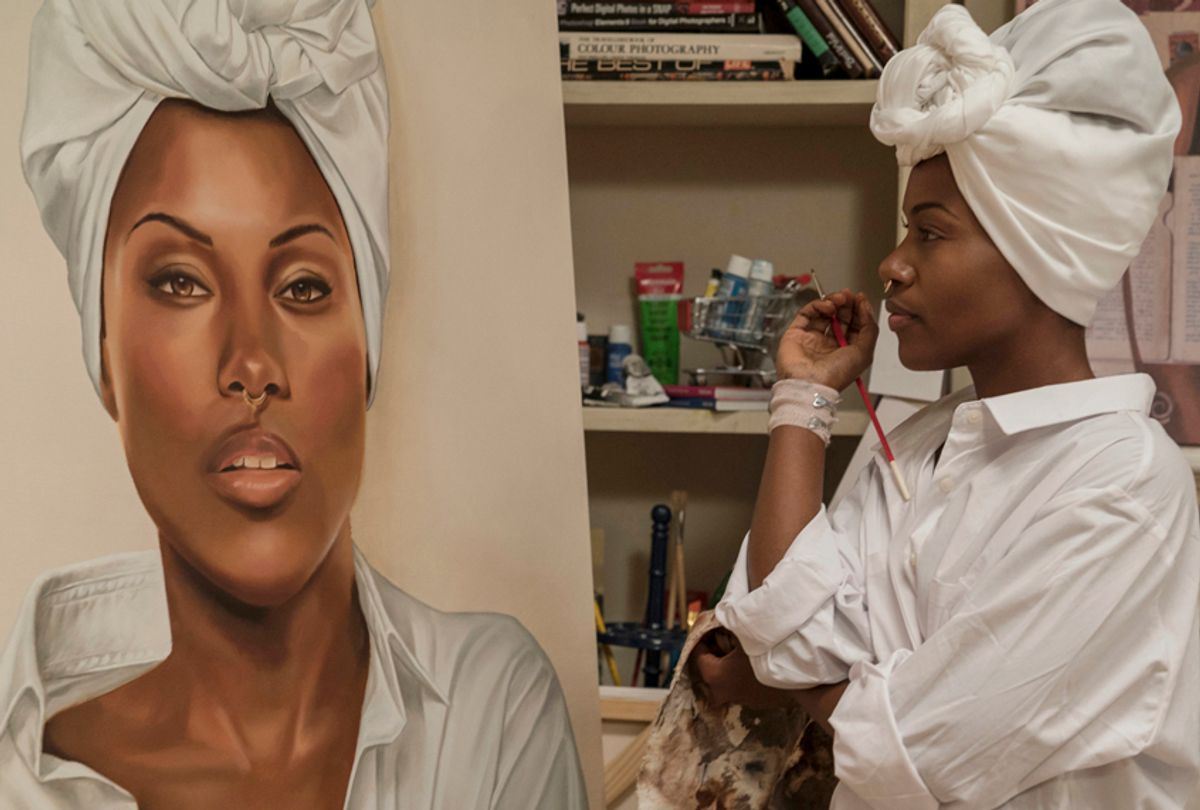 DeWanda Wise in "She's Gotta Have It" (Netflix/David Lee)
--

Separately, Spike Lee’s 1986 breakthrough film “She’s Gotta Have It” and his Netflix series “She’s Gotta Have It,” debuting Thursday, are very much works evocative of their respective times and place. The former, set in the mid-'80s version of Brooklyn's Fort Greene neighborhood, burbled with hip hop culture. On theater screens, Lee captured its image as a gritty, graffiti-tagged, beautiful mecca of urban blackness.

Today’s Fort Greene sits at the heart of gentrification, with rich white city dwellers buying up brownstones in historically black and Latino neighborhoods, pushing out corner bodegas and longstanding take-away joints in favor of boutiques with $500 dresses and artisanal grocers. The area is still the home of Spike Lee’s production company, 40 Acres & A Mule, and the same conversations about women and men and city living are as relevant in 2017 as they were more than three decades ago.

But in bringing back Nola Darling, revived with provocative and playful brilliance by DeWanda Wise in Netflix's version, Lee and his wife and fellow executive producer, Tonya Lewis Lee, speak to the truth of what it is to be a woman, and a woman of color, that feels truer now than it did when Tracy Camilla Johns originated the role in 1986.

By no means is this statement meant to disparage Johns’ portrayal back then. Her performance made Lee’s feature-length debut feel revelatory and honest in its humorous and affirming vision of black sexuality, a revolutionary act in an industry centered upon white masculinity and its interpretation of femininity. The way Lee wrote Nola more than 31 years ago also laid the groundwork for criticism citing a string of denigrating characterizations about women that he has faced for much of his career.

Insightful filmmakers transform with experience, and in expanding “She’s Gotta Have It” from an 84-minute film narrative into a 10-part series, Lee tacitly acknowledges the limitations of the male gaze when it comes to examining a tangled love story with a heroine.

Lee directs every episode of “She’s Gotta Have It,” but the perspectives of women, including Lewis Lee and Pulitzer Prize-winning playwright Lynn Nottage, Eisa Davis, Joie Lee and Radha Blank, inform this update in a way that expresses its feminism and politics in ways beyond the main character’s sexual voraciousness. It also makes sense from a business perspective; Lee’s comedy is joining a TV landscape already staked out by Issa Rae’s “Insecure,” Shonda Rhimes’ “Scandal” and Mara Brock Akil’s “Being Mary Jane,” necessitating the incorporation of an assured female point of view.

We know much more about Wise’s Nola than the version Lee wrote for Johns: she’s a cinemaphile and a hedonist, and we get to see her make her art instead of merely claiming the label as a descriptor.

Nola still loves sex and shuns monogamy, blithely describing herself as a “sex-positive polyamorous pansexual.” As she does in the film’s opening scene, she introduces herself to series viewers by admitting, “some people call me a freak. I hate that word. I don’t believe in it. Better yet, I don't believe in one-word labels."

Gone, wisely, is the rape scene in the film that inexplicably inspires Nola to drop Greer and Mars to choose Jamie, the man who assaults her. This happens close to the film’s ending and never depicts Nola processing the impact of that violation beyond interpreting it as a sign that Jamie's upset (!).

Instead, Nola sustains a more common assault in the first episode, involving street harassment that escalates into a frightening physical confrontation bookended by profane and abusive threats. The moment is evocative of the cultural conversation topping the headlines right now, but it’s also coincidence, an indicator of the kind of verbal violence women of color have been dealing with for years (Lee and Joie Lee acknowledge the show’s timely parallels to the #MeToo conversation in recent interviews, but the writers likely drew inspiration from #YouOKSis, a social media movement sparked in 2014 by blogger Feminista Jones, a black woman living in New York).

Anyway, “She’s Gotta Have It” isn’t expressly about Nola’s struggles and her aversion to commitment, a bracing trait 31 years ago that’s the norm in 2017. Nola is more unique in her frustrating devotion to floating with the flow of life in her Brooklyn neighborhood, whether that applies to her relationships with a new white neighbor in conflict with long-term residents of color or her romances or her relationship with responsibility.

The character may have been a fully-grown adult in 1986, but she undoubtedly fits the description of a Brooklyn millennial: She’s also the frustrating kind of person who can barely make rent but thinks nothing of going hundreds of dollars into debt for the perfect little black dress, who shows up late for everything and everyone and doesn’t understand why people don’t care. Wise glows with such confidence and poise in every scene that even when Nola is many sheets to the wind, you can’t help but forgive her. The actress makes her too fun, too seductive and too much of everything to turn away.

Broadening the story to fill 10 economic episodes, each clocking in at under 40 minutes, allows Lee and Lewis Lee to shade in Nola’s ambiguities. “She’s Gotta Have It” illustrates the challenges inherent to being black, female and an artist, in a culture bent on making it impossible to be each of those things, let alone all of them at once. And it does all this without sacrificing any of the story’s zest, Lee's cinematic style, or his lasting affection for Brooklyn and its place in black culture. The hip-hop and R&B-dominant soundtrack alone, highlighted by shots of LP covers in case an artist's name escapes us, is enough to fuel a binge consumption of season 1. Then again, the bright, color-saturated visuals and vibrant performances beg for a more leisurely pace and measured consideration.

Through Nola and her artwork, Lee celebrates the black female form while showing all the ways that black women are casually objectified, such as in clips from a darkly comical game show within a show titled "$he A$$'d For It," where the grand prize is a "complete booty overhaul."

And while “She’s Gotta Have It” directly invites viewers to tag along with Nola by using Lee’s signature fourth wall breaks that allow her to confide in the audience, the camera’s perspective doesn’t necessarily share Nola’s open view of Fort Greene’s gentrification. Nola’s new white neighbors are pressuring longtime residents to sell and pushing out the cultural vitality of the place; in one scene, a white neighbor harasses Mars as he’s ringing Nola’s doorbell, declaring herself to be a member of the new Fort Greene.

Mars points out that Fort Greene can’t be new just because white people decided to show up. Ramos says the line, but it might as have dropped from Lee’s lips.

To Ramos’ credit, his half-black, half-Puerto Rican Mars eventually steps out of the shadow cast by Lee’s iconic portrayal of the character, a physical cartoon that achieved worldwide appeal through a series of Nike Air Jordan commercials. Lee’s version hangs over Ramos during the opening episodes, but eventually cedes the stage to Ramos’ goofy sweet portrayal, even as Mars Blackmon the character remains a signature parody.

Anthony is even more of caricature as the hilariously vain and self-involved Greer — a more curious member of Nola’s stable of lovers than Bent’s wealthy, image-conscious Jamie who, in this version, is married. The series allows Nola’s love life a measure of soulfulness by giving her a fourth lover in Opal (Ilfenesh Hadera), a staid, elegant woman who isn’t interested in taming Nola but isn’t in a hurry to deal with her flightiness either.

And the ultimate sweetness of “She’s Gotta Have It” rests in its heroine’s lighthearted search for meaning, identity and sexual bliss, even as the other people in her life — lovers and stranger alike — make her a blank canvas for their emotional baggage and suppositions about how life and love is supposed to go. Whether each man’s desire for her is filtered through the lens of worship, possession or accessorizing, they all want different versions of the same thing. Only this time Nola holds her ground in a more satisfying fashion, culminating in a scene that’s joyful and sensual in a way that’s unlike pretty much anything else on television.

In the film, Nola arrives at the conclusion that the way she’s viewed by the world is “about control: my body, my mind. Who’s going to own it, them, or me?”

Her conclusion is that each of her lovers know parts of her, but only she knows the reality of the whole story. Nola has to state this to the movie’s viewers. In contrast, the series takes its very sweet time showing that to be true. This makes all the difference in the world.