Thanks, no thanks. Ten films (though some are turkeys) to be grateful for this Thanksgiving

Salon appreciates films that express gratitude, even if some are thankless 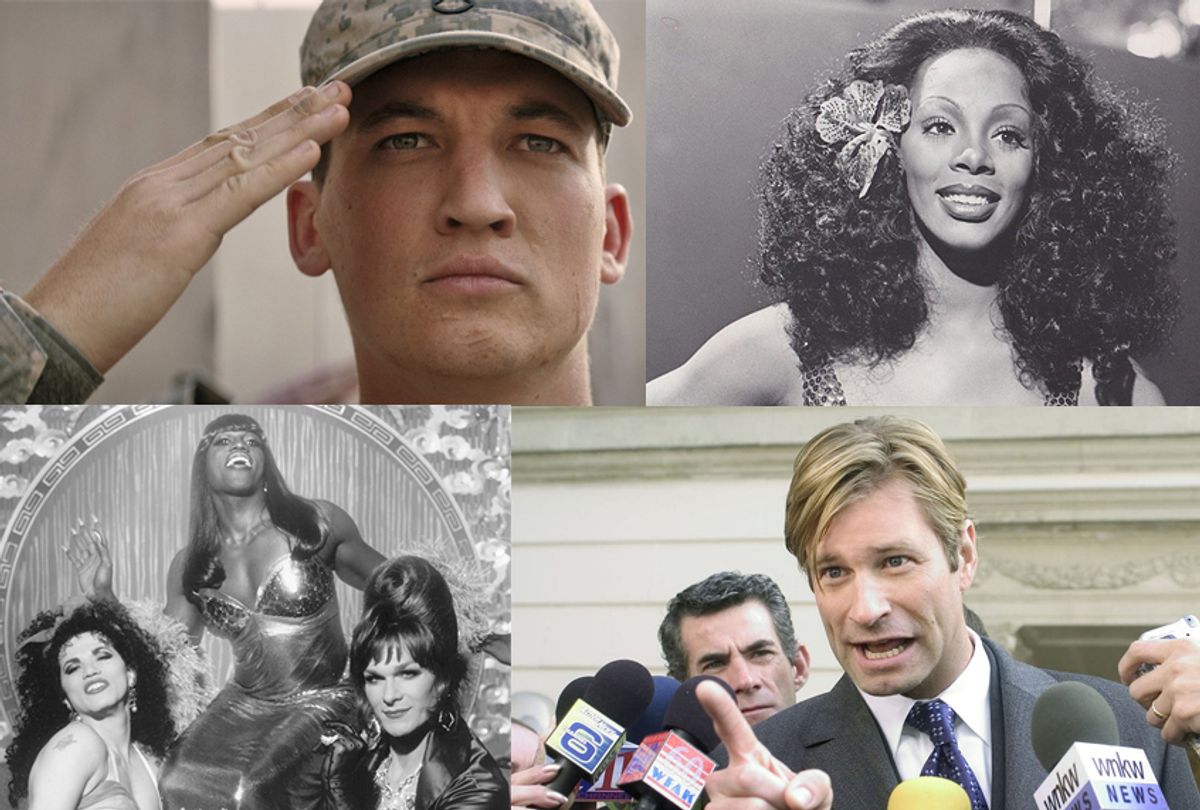 Thank You For Your Service; Thank God It's Friday; To Wong Foo, Thanks for Everything! Julie Newmar; Thank You for Smoking (Universal Pictures/Columbia Pictures/Fox Searchlight Pictures)
--

Thanksgiving is a time to be grateful. It’s a time when families come together to appreciate what they have. It’s also a time to overindulge by overeating and overspending (on holiday shopping).

In cinema, there are many films where gratitude is on (or off) the menu. Here are ten films (in alphabetical order) with “Thank(s)” in their title. They are a mixed bag of ambitious — and not always successful — tales of drama, romance, murder and mayhem. There are stories, both fictional and real, about etiquette, understanding, tolerance and support.

So file these ten films under “Thanks” or “No Thanks.” They may be worth a look with the family — or for anyone who needs to escape the famdamily this holiday season.

1. “Happythankyoumoreplease” Josh Radnor of “How I Met Your Mother” fame wrote, directed and stars in this twee-dious indie about six quirky characters in New York City. Young and impetuous, they make questionable decisions about relationships because they just don’t have their shit together yet. Mary Catherine (Zoe Kazan) and her boyfriend Charlie (Pablo Schreiber) are debating about leaving NY for LA when he gets a job opportunity. Annie (Malin Ackerman) who has alopecia — she creates a drinking game about this — is reluctant to date the nice guy (Tony Hale) at her job, who adores her. And Sam (Radnor), a short story writer, takes in a young African-American boy, Rasheen (Michael Algieri), who is left behind on the subway. His half-hearted attempts to return Rasheen to the authorities are troubling, but so is Sam’s creepy attempt to woo a singer/waitress named Mississippi (Kate Mara) by having her move in with him for three days. “Happythankyoumoreplease” wants its fragile-feeling characters to realize their potential, and be grateful for what they have — or deserve — but Radnor’s script contains more eye-rolling moments than insights.

2. “Mr. Thank You” The titular character, a bus driver named Arigatô-san (Ken Uehara), is unfailingly polite, thanking everyone who allows his bus to pass. “That’s why people call him ‘Mr. Thank You,’” a subtitle reads. Hiroshi Shimizu’s 75-minute road movie from 1936 could get viewers blind drunk by the midpoint if they sipped sake every time a character says “Thank You.” The story has a mother and her 17-year-old daughter going to Tokyo “to visit relatives,” they say, though the truth is a bit more shameful. They travel with a handful of other nameless passengers, whose stories unfold over the course of the film. Everyone has good manners, although one gentleman is irked by Arigatô-san’s stopping to pass messages on to villagers or do some shopping. The film has a jaunty score and some fabulous scenery, plus the effect of the bus passing people is nifty.

3. “Thank God It’s Friday” No, this is not a film about storeowners the day after Thanksgiving. It’s a lame disco-era comedy featuring more than a dozen characters at a nightclub called the Zoo, owned by Tony (Jeff Goldblum). Frannie (Valerie Landsburg) is a teenager who wants to win a dance contest with music by “special guest stars” The Commodores; a married couple (Mark Lonow and Andrea Howard) has a night of excitement; Jennifer (Debra Winger) is a klutzy single looking for love; and Nicole (Donna Summer) is hoping for a chance to sing. As DJ Bobby Speed (Ray Vitte) keeps the wall-to-wall music playing, the performers mug their way through the bad jokes and slap-stick physical humor. “Thank God, It’s Friday” is not “the best thing for dancing since feet.” But Thank God, Marv Gomez (Chick Vennera), in full leather no less, performs an athletic dance routine atop cars in the club’s parking lot, and Donna Summer croons the catchy Oscar-winning song, “Last Dance.”

4. “Thanks For Sharing” This clumsy, message-laden drama about a trio of sex addicts may portray the important topic of recovery, but, like “Thank God, It’s Friday,” it plays out like a very special episode of “The Love Boat.” This wholly mediocre film, co-written and directed by Stuart Blumberg (who co-scripted “The Kids Are All Right”), introduces its protagonists — Adam (Mark Ruffalo), Neil (Josh Gad) and Mike (Tim Robbins) — at a Sex Addicts Anonymous meeting and alternates telling their stories, even though they are all basically the same. It’s 12-step and repeat. Each character faces obstacles, hits bottom and seeks redemption/forgiveness. “Thanks for Sharing” offers nothing new in terms of its plotting — the film is entirely too formulaic and obvious — so there is little for audiences to enjoy. The comedy is awkward and the sex is mostly depressing. Although Alecia Moore (aka Pink) is a standout as Neil’s girlfriend, Dede, “Thanks for Sharing” wastes its strong cast by having them try very hard with very little.

5. “Thank You for Playing” In this moving documentary, video game designer Ryan Green creates “That Dragon, Cancer,” as a way of creating a game/safe place to talk about (and remember) his young son, Joel, who has a fatal brain tumor. The film uses avatars, home movies, observational scenes and interviews to convey the family’s experiences. “Thank You for Playing” is best at showing how Ryan’s game uses emotion to engage the player. In doing so, he considers what you can experience in a video game while also addressing fears about dying and beliefs in heaven. Some folks may find Green’s game inappropriate or self-serving, but it’s impossible not to get choked up seeing players crying after testing “That Dragon, Cancer” at a video game trade show.

6. “Thank You for Smoking” An achingly funny comedy about Nick Naylor (Aaron Eckhart, perfectly cast) as an amoral tobacco lobbyist, this adaptation of Christopher Buckley’s novel features an outlandish cast of characters, all hilariously played by outstanding character actors (Robert Duvall, Rob Lowe, Sam Elliott, Maria Bello, and William H. Macy). As Nick teaches his son (Cameron Bright) ethics and how to argue persuasively — even if you’re wrong — he encounters a host of bad situations, including bribing an ex-corporate spokesman now dying of lung cancer, sleeping with a reporter (Katie Holmes) penning an expose and being kidnapped by an anti-smoking concern. Written and directed by Jason Reitman, “Thank You for Smoking” is a shrewd mix of satire, sight gags and one-liners that rarely miss the mark — or a beat.

7. “Thank You for Your Service” Inspired by a true story (and adapted from David Finkel’s book), this compelling tale of soldiers’ trauma and survivor’s guilt has Adam (Miles Teller), Solo (Beulah Koale), and Billy (Joe Cole) re-adjusting to life back in the States. The men observe about war, “While you’re there, you want to get home. When you get home, it’s all fucked.” Each man has had his brain “scrambled” by the horrors of war. And while Solo acknowledges, “the Army saved my life,” the VA isn’t very helpful when he really needs assistance. Likewise, Adam, a Sergeant who commanded a dozen men, is reeling from the horrors of war; he still tastes the blood of a man he tried to save. When a senior officer tells Adam that getting help is “bad for Big Army” because it shows weakness in leadership, it’s quietly devastating. The ironically titled “Thank You For Your Service” has some on-the-nose symbolism and didacticism, but its points about how soldiers fare when they get out of active duty are valid and need to be addressed.

8. “Thank You, Jeeves!” This 1936 adaptation of the P.G. Wodehouse story has Bertie Wooster (David Niven) in need of new adventure. “Remembering past adventures, I fail to share your enthusiasm,” his unflappable manservant Jeeves (Arthur Treacher) deadpans. But adventure indeed arrives at Bertie’s abode in the form of Marjorie Lowman (Virginia Field), a woman on the run. When Marjorie flees in the middle of the night, Bertie and Jeeves follow in hot pursuit the next morning. This hour-long film has plenty of wordplay and slapstick — much of the latter provided by Drowsy (Willie Best), an African-American saxophonist who the men meet on the road. As the plots and characters all converge in the madcap ending, Jeeves proves, once again, that he knows best. And Bertie is grateful, as always.

9. “Thank You, Mr. Moto” Peter Lorre reprises his role as the Japanese detective in this, the second entry in the quaint film series loosely based on John P. Marquand’s novels. As one character announces, “When Mr. Moto shows up, something happens.” And indeed it does. Colonel Tchernov (Sig Rumann) conspires to obtain a series of antique scrolls owned by Prince Chung (Philip Ahn). However, the Colonel ends up dead. Someone wants the scrolls — they indicate the location of Genghis Khan’s tomb where treasure awaits — and will stop at nothing to get them. Thankfully, the clever Mr. Moto sets a series of traps to catch the criminals. Lorre is, unfortunately, in yellowface as Mr. Moto, but he does provide some verve as a series of reversals of fortune occur. Alas, the casting of American actors in Chinese roles is equally problematic and dubious.
10. “To Wong Foo, Thanks for Everything, Julie Newmar” A signed photograph of Julie Newmar that reads, “To Wong Foo, thanks for everything,” inspires New York City Drag Queens of the Year, Vida (Patrick Swayze) and Noxzema (Wesley Snipes) to cash in plane tickets to drive across country while dispensing lessons to Chi Chi (John Leguizamo), a drag “princess.” However, when their car breaks down outside Snydersville, the three larger than life outsiders must teach the whole town lessons of empowerment, acceptance and tolerance. This fitfully amusing comedy-drama benefits from the sassy performances by the three male stars who are convincing in a series of fabulous outfits. However, they are given an obvious script (by Douglas Carter Beane) that is better with the one-liners than it is with its plotlines involving spousal abuse and a racist, homophobic sheriff (Chris Penn). The fine supporting cast includes Stockard Channing, Blythe Danner, Beth Grant and Arliss Howard, are given largely thankless roles.