What to drink with your Thanksgiving leftovers

Congratulations, you made it through Thanksgiving! Class up refrigerator scavenger meals with these fine cocktails 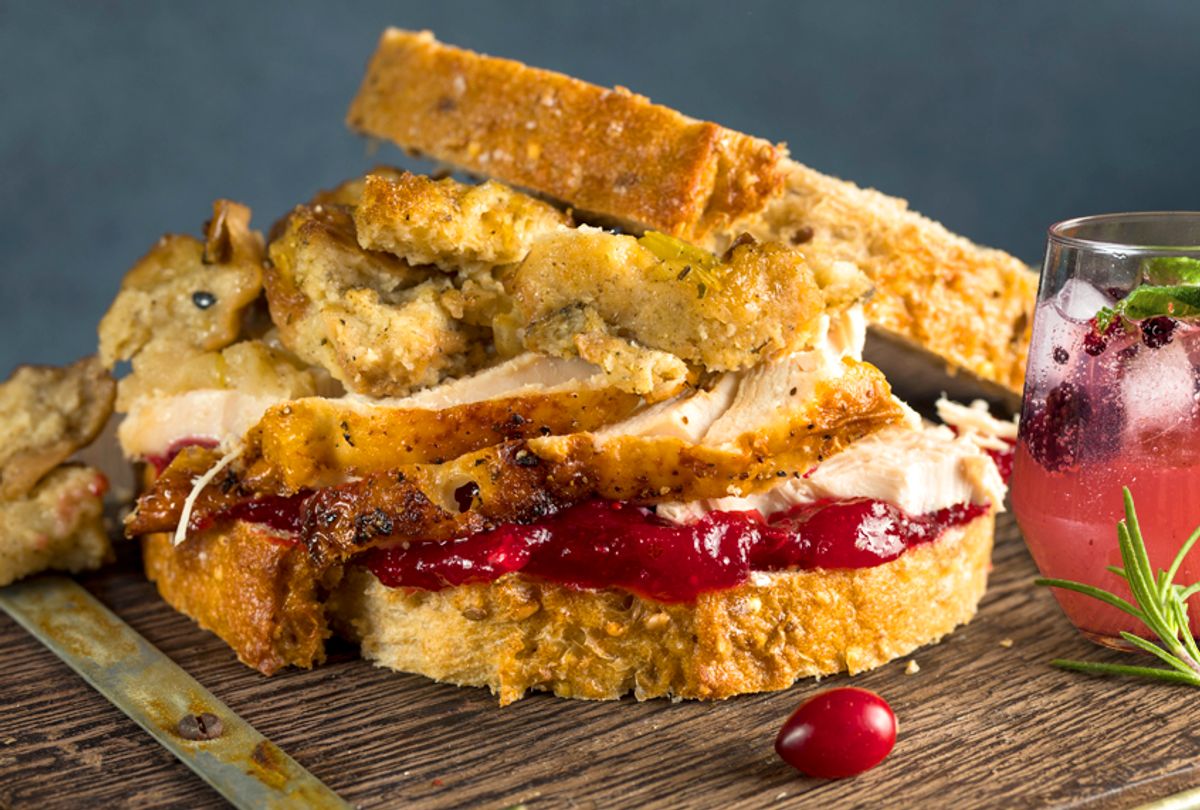 We put hours of planning into our Thanksgiving dinners, and one of the perks of cooking enough to feed an entire Olympic swim team is not having to cook real meals for the duration of the long weekend. Leftover meals are acts of spontaneity, and they have a tendency to devolve over the course of the weekend as supplies dwindle and motivation falls by the wayside. You can rescue some dignity by planning a cocktail menu to complement even the most shameful acts of refrigerator scavengery.

Level One: A balanced plate, reheated

It’s the day after Thanksgiving, and your fridge is full of bounty. It’s time for the reasonable sampling you meant to have yesterday before you face-planted into a Devil’s Tower of mashed potatoes. One plate; no seconds. A slice of turkey, a modest scoop of yams, a little bit of stuffing — not too many carbs, please! Green things, even. What the hey, there’s some salad left. (There’s a lot of salad left.) You’re reheating your main dish, setting out a separate plate for your leafy greens. You’ve even put a full set of silverware on the table. Isn’t it lovely to revisit such a reverent celebration of the harvest? You need a respectable cocktail worthy of the experience.

Pair it with: The Boulevardier

It’s a Negroni, but with whiskey. A sophisticated and balanced cocktail that dates back to the 1920s, this drink can be made with bourbon or rye, depending on your preference.

For full Thanksgiving theme cred, you’re in luck if you have a bottle of Wild Turkey on hand — in his new and already-essential bar companion, “Meehan’s Bartender Manual,” cocktail authority Jim Meehan recommends using Wild Turkey 101 Rye for his Boulevardier. The Boulevardier is a cocktail recommended by Eddie Russell, the junior half of Wild Turkey’s master distiller team — and the half who actually enjoys a cocktail, unlike his dad, the "Buddha of Bourbon" Jimmy — so consider that a recommendation right from a master’s mouth.

According to Meehan’s research, the original Boulevardier was an equal three-part split of rye, Campari and Italian vermouth. Meehan suggests doubling down on the whiskey, and really, who am I to disagree?

Stir with ice and serve it chilled and up, or with one of those big rocks of ice if you’re fancy. Put it in a proper glass.

The leftovers are starting to get a bit picked over, but there’s still good stuff in the fridge, and you can stretch it out by layering it between two slices of bread. This layered turkey sandwich recipe from Spoon Fork Bacon is already legendary, but this is your moment. Play Guy Fieri in your own kitchen: Whoa, brother, is that celery salt? Get crazy. If you can fit it into your mouth, it counts.

Pair it with: Redhead or The Bardstown

The cranberry sauce I bring to Thanksgiving is a Bon Appétit recipe from 1991, which calls for dumping ¼ cup of bourbon onto your sugared cranberries after you pull them from the oven, and my twist on the recipe is to double the bourbon. Add a little cinnamon and you have an amazing dish, and there’s no reason why the combination won’t work in a cocktail, too. Vodka + cran is the summer you. It’s Cranbourbon Season now.

The Maker’s Mark Redhead is an idiot-proof recipe that also works with any wheated bourbon you have on hand that you don’t mind mixing. Maker’s is available everywhere, but Rebel Yell, Larceny, or Old Fitzgerald will do just as well. Fill a glass with ice, throw in however much bourbon your holiday requires, splash in some cranberry juice, and top off with soda water and a lime wedge.

The Bardstown is a remix of the Manhattan, substituting cranberry juice for the sweet vermouth, and bumping up the bourbon ratio. You’re welcome.

Pick a Kentucky straight bourbon you like, because you’ll be tasting it. I like Russell’s Reserve 10 year, Four Roses Single Barrel, or Old Forester Signature 100 proof.

Shake it with ice and serve up, and garnish with an orange peel.

You’ve reached the sweatpants and binge-watching stage of your four-day weekend, and the leftover tubs are dwindling. Carefully balanced meals and inventive sandwich creations are a thing of the past. You’re pretty sure you know which tiny house these tiny house hunters are going to choose, and they are going to choose wrong. You’ve shuffled into the kitchen and dumped a handful of whatever’s left into a homemade Famous Bowl. Maybe you bother to heat it up. Maybe not. You’re living your worst and best life all at once.

Margaritas are the mixed drink of choice in every strip mall American-Mexican restaurant in the land for one reason, as far as I’m concerned: It’s the perfect counterweight to a pile of carbs and cheese and grease. There are many ways to make a margarita, but I am a fan of this simple and beautiful ratio that calls for a ton of tequila and no extra sugar, because you know there might be some pie left in the back of the fridge.

Salt if you must, but be real — you probably already have enough on your plate.

Level Four: No pie left, red alert, this is not a damn drill

Your father-in-law has been watching Alex Jones YouTube videos without headphones and every single bathroom has been occupied for 36 hours straight. Practice deep breathing. You didn’t come this far on a long weekend, trapped in a too-small home with too many people, to lose it over your cousin eating the last slice of pie, the one you were saving for second breakfast. Imagine yourself in a room filled with puppies. Turn your ugly cry into tears of joy. You’ll all be going back to work soon, and what horrors await in your neglected inbox? Better enjoy yourself while you can.

Pair it with: The best sipping booze you have, neat

Now is not the time to freak out and end up in a viral video. Channel Jimmy Russell, that role model of good living and gracious wisdom. Be the Buddha of Bourbon you wish to see in the world. Pull yourself together in the mirror. Say it out loud, like Jimmy would: Just pour me some whiskey in a glass, please.