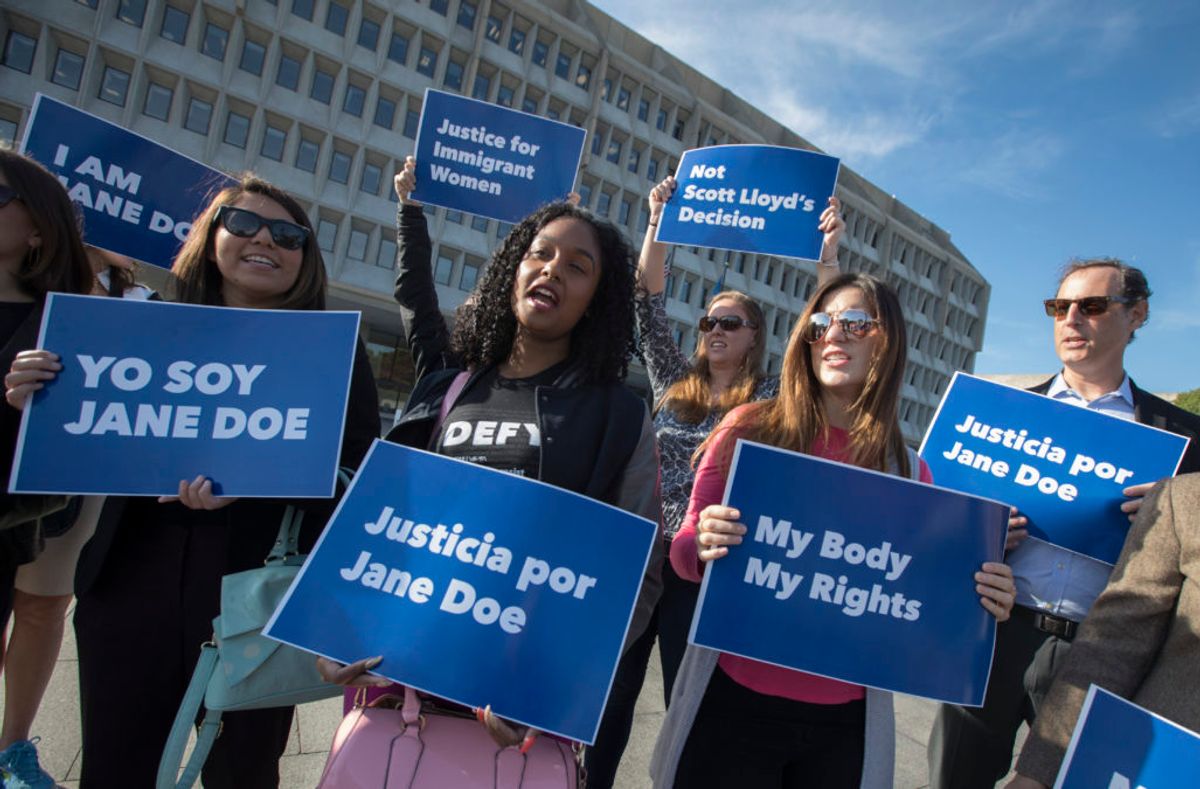 Activists with Planned Parenthood demonstrate in support of a pregnant 17-year-old being held in a Texas facility for unaccompanied immigrant children to obtain an abortion, outside of the Department of Health and Human Services in Washington, Friday, Oct. 20, 2017. (J. Scott Applewhite/AP Photo)
--

Immigrant minors who request abortions while in federal custody are being referred to counseling centers recommended by an anti-abortion advocacy group.

The list of counseling providers approved by the Office of Refugee Resettlement was first made public last month during a federal court case on behalf of a 17-year-old girl, referred to as Jane Doe, who sought an abortion while confined to a shelter in South Texas.

Further reporting by Reveal from The Center for Investigative Reporting indicates that the list was created by the advocacy network Heartbeat International. Heartbeat’s vision, according to its website, “is to make abortion unwanted today and unthinkable for future generations.”

On March 24, the day he was announced as director of President Donald Trump’s Office of Refugee Resettlement, Scott Lloyd issued instructions for another girl who was in the agency’s custody at an Arizona shelter. She, too, was pregnant and told shelter staff she wanted an abortion.

The agency is required to provide medical care to unaccompanied immigrant children who live in its shelters while they await placement with a family member or sponsor. Until this year, that care included granting girls access to abortion services if they chose. For victims of rape or incest, the government would cover the cost.

But Lloyd, a lawyer who has written extensively about his opposition to abortion and contraception, started to change the agency’s practice. Instead of an abortion clinic, he wrote, the shelter should send the girl to a Christian ministry called Choices Pregnancy Centers of Greater Phoenix for an ultrasound and “options counseling.”

“We’ll work on formalizing these procedures,” he wrote, “but we’ll have to do it ad hoc for now.”

Lloyd’s emails to his staff first surfaced in a court challenge from the American Civil Liberties Union on Doe’s behalf. That girl’s ultimately successful fight to end her pregnancy, in the face of strong resistance from the Trump administration, became national news.

Doe was apparently the first minor in Office of Refugee Resettlement custody to get an abortion since Lloyd took over, based on discussions of her case in court. On Nov. 10, a group of 19 senators – 18 Democrats and the Independent Bernie Sanders – pressed the agency for details about the policy changes Lloyd has implemented. So far, the resettlement office has declined to say whether or how the agency has formalized the instructions Lloyd gave in March.

But one document filed in the case offers clues.

In early October, when Doe’s case was briefly before a federal judge in San Francisco, the ACLU filed a document called “Trusted Providers in HHS Cities” — a list of 60 anti-abortion pregnancy counseling centers across the nation.

Brigitte Amiri, the ACLU’s lead attorney in the case, told Reveal that her window into Lloyd’s correspondence cuts off in early April, at the end of the period covered by discovery in the case. She said she obtained the provider list separately.

The date on the list, July 28, suggests that by mid-summer, Lloyd’s office progressed from responding to pregnancies on a case-by-case basis to issuing proactive guidance to shelters under contract with his office.

“It came from an advocate on the ground, and I’m not at liberty to say whom it came from,” Amiri said. “But it’s my understanding that it’s a list of approved HHS sites that any minor who requests an abortion must visit to get so-called counseling from the crisis pregnancy center.”

According to Amiri, the Office of Refugee Resettlement sent the list to the shelters across the country, giving local staff a set of approved options.

The resettlement office didn’t respond to questions from Reveal about the list, but in court filings, the government has never disputed its authenticity.

To learn how the government made the list, and how much it had been used, Reveal called each of the 60 providers on the list, reaching representatives for 24 of them. None were aware of the list, or that the government had approved them to provide pregnancy counseling to migrant minors.

“Normally people come in on their own,” said Cindi Ritter, executive director of Baltimore’s Pregnancy Center North. “We don’t have agencies call us.”

“The client themselves has to actually reach out to us for us to be able to help them,” said Linzy Laird, director of client services at Daybreak LifeCare Center in Columbia, South Carolina. “We are pro-life and we can’t appear to in any way be coercing someone to use our services. So someone has to come to us on their own free will.”

There is precedent, however, for requiring women to attend such counseling sessions before an abortion: South Dakota lawmakers created that requirement in 2011. That law has been blocked in court following another challenge from the ACLU. More than a dozen states also directly support anti-abortion crisis pregnancy centers.

Some centers on the refugee resettlement agency list stressed that their services — which also include free sonograms, baby clothes and diapers — don’t meet the strict definition of counseling.

“We’re not licensed counselors; we offer options consultation,” said Jessica York, a client advocate and residential coordinator at Aid for Women in Chicago. “We’re not government-funded at all. We’re funded by donation from the Catholic Church. So the values system of the government agencies and the Catholic Church is obviously going to be different.”

None said they had knowingly counseled girls living in Office of Refugee Resettlement shelters.

The list includes providers in 22 cities near refugee resettlement facilities, including Los Angeles, Phoenix and New York City. All offer so-called pro-life counseling and have ties to local anti-abortion networks. Many are religious, provide counseling for post-abortion trauma or “abortion reversal” — a potentially dangerous treatment, based on dubious science, in which women are given a large dose of hormones to supposedly counteract the effects of the abortion pill mifepristone.

Few states or cities require pregnancy counseling centers to be licensed, and only one of the centers on the list indicated it had ever been vetted by the Office of Refugee Resettlement. Bethany Christian Services in Portland, Oregon, also contracts with the agency to provide long-term foster care in Michigan. The terms of that contract require Bethany Christian Services to maintain its child care license with the state, a process that includes regular inspections. The group was a strong advocate for a bill in Michigan that would allow religious adoption agencies to discriminate against gay parents.

The Office of Refugee Resettlement has not specified the criteria it used to develop this list — why it included some crisis pregnancy centers in cities but excluded others. The agency may have hidden some clues, however, in the file it sent to shelters.

A further analysis of the documents’ metadata indicates that a third Heartbeat International employee, Hannah Ellis, reviewed both documents. Ellis was hired in June as the group’s executive assistant and international program specialist. Prior to that job, she was an analyst at the Washington, D.C., advocacy group Concerned Women for America, which has lauded Lloyd’s anti-abortion policies at the Office of Refugee Resettlement.

Reveal asked Heartbeat International spokesman Jay Hobbs about the connection between his group and the Trump administration, but Hobbs referred questions to the Office of Refugee Resettlement, which did not respond.

To become a Heartbeat International affiliate, according to the group’s website, a counseling center need not be licensed or inspected by a government agency.

Based in Columbus, Ohio, Heartbeat International formed as “Alternatives to Abortion” in 1971, two years before the Supreme Court’s Roe v. Wade decision and just as some states were beginning to open abortion access.

In its materials and seminars, the Christian group helps its members craft marketing messages and influence local lawmakers. Heartbeat International spent more than $100,000 on lobbying over the four-year period before 2015, according to its most recent available tax filing.

Robert Carey, who oversaw the Office of Refugee Resettlement from April 2015 through the end of the Obama administration, told Reveal the agency’s policy guide dictates standards for medical or counseling providers for children in the agency’s care.

“We were pretty clear that, when counseling took place, that it was in accordance with federal or state law,” Carey said. “If a minor was going to be counseled about her options, it (should) be done with a licensed medical provider regarding what care he or she was legally entitled to receive.”

According to the current policy guide, “ORR requires licensed medical practitioners (physicians, physician assistants, nurse practitioners) acting within their scope of practice to provide or supervise all medical evaluation and management. In addition, a licensed mental health professional must deliver mental health services.”

Any changes to that policy, Carey said, would normally be vetted by a team of lawyers and officials before being added to the policy guide and sent to shelters.

In this case, Carey said, “it appears to have been a very different process around the development and issuance of guidance to the field. . . . It’s not the way it would have been done in prior administrations.”

Correction: A previous version of this story misstated Heartbeat International’s lobbying expenditures for the four-year period leading up to 2015. The organization spent $106,139 during that period.