Urban inequality in the U.S. can be traced to unresolved issues and injustices lingering from the slave trade era 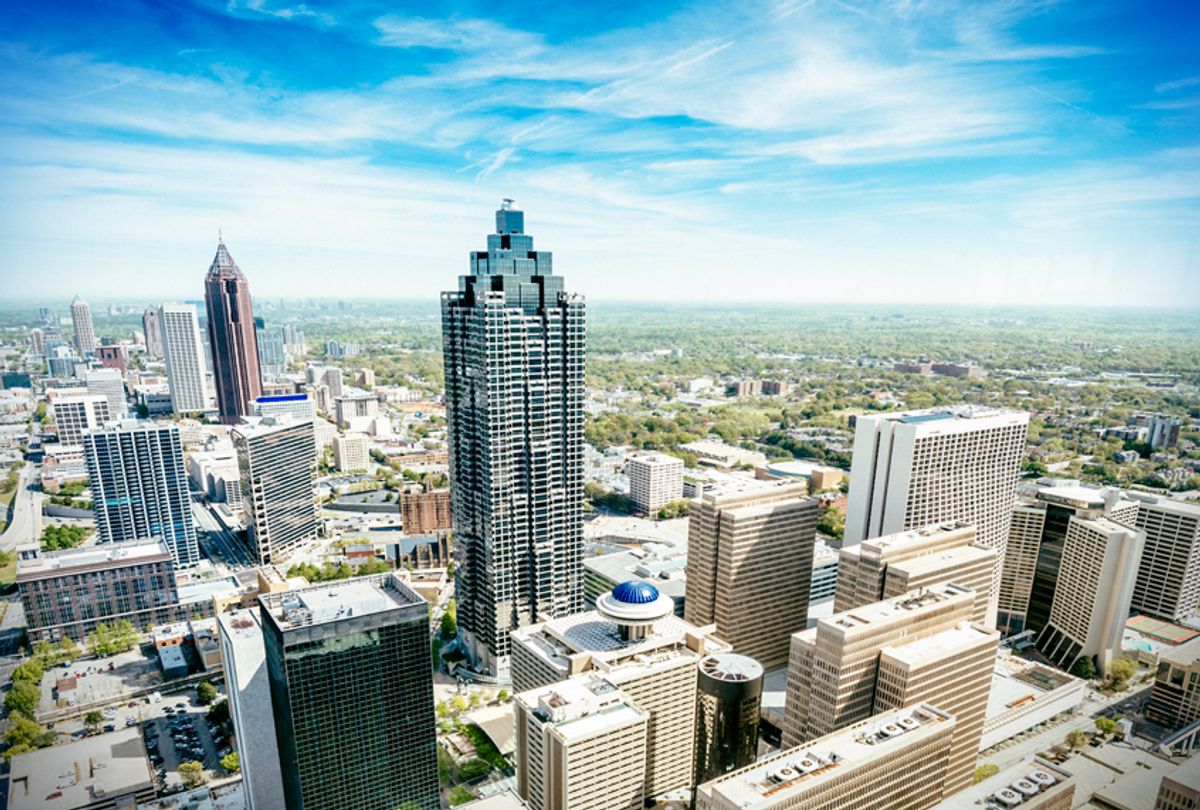 Carl Anthony is a renowned architect, urbanist, and activist. In his new book, he shows how many of the world’s major cities—from New York to Dakar, London to Rio de Janeiro—were built by slaves. Excerpted from The Earth, The City, and the Hidden Narrative of Race by Carl Anthony (New Village Press, October 2017, paperback).

To understand the contemporary challenges of race in American cities and the relationship between African Americans and urbanization, we must examine the role of the trans-Atlantic slave trade in the development of maritime cities. Contemporary forms of urban inequality in the United States can be traced to unresolved issues and injustices lingering from the slave trade era.

The labor of African slaves laid the groundwork for the transformation of the global economy. Between 1500 and 1800, around forty or fifty maritime cities and towns emerged on four continents and in the Caribbean — their growth fueled by profit from the slave trade. Records show, for the first time, that the deforestation that accompanied the development of the silver and gold mines and sugar plantations of this period, as well as ship building and construction of urban centers, brought about irreversible climate change. Writing in the early sixteenth century, Cristobal Colon noted that “since the removal of forests that once covered those islands [Madeira, Canary, and Azore Islands], they do not have so much mist and rain as before.”

At the time of the American Revolution, New York City had a larger population of slaves than any other city in North America except Charleston, South Carolina. New York City and Charleston were not the only maritime cities in the seventeenth and eighteenth centuries whose increasing prosperity was based upon profits from the slave trade and plantation agriculture. In the sixteenth and seventeenth centuries, close to fifty settlements in the British Isles, France, Spain, West Africa, the Caribbean, and South and North America were built as a direct consequence of the slave trade.

Numerous cities, particularly port towns, grew and thrived on the wealth generated by the slave trade. Liverpool, a shipbuilding town in England, prospered to such an extent during this period that most of its streets are named after prominent slave traders. Other cities whose growth was financed by the slave trade include Amsterdam and Rotterdam in the Netherlands; Bristol, Manchester, and London in England; Nantes in France; Lisbon in Portugal; Seville in Spain; Gorée and Dakar in Senegal; Elmina in Ghana; Lagos in Nigeria; Port Au Prince, Santo Domingo, Nassau, Kingston, and Havana in the Caribbean; Bahia in Curaçao; Rio de Janeiro, Porto de Santos, Porto de Paranaguá, and São Sebastião in Brazil; Montevideo in Uruguay; Buenos Aires in Argentina; and New Orleans, Charleston, Baltimore, Philadelphia, and Providence in North America.

My interest in the mercantile cities of the Atlantic Basin originated from my trip to Africa in 1970 when I began to realize that these cities owed their growth and prosperity to the slave trade. After my “The Big House and the Slave Quarter” essays were published in Landscape magazine in 1976, I tried to decide whether to follow up with an essay about the Civil War and Reconstruction or with another about slavery in the development of the cities of the Atlantic Basin. I put both projects on the backburner for many years. My interest in the mercantile cities of the Atlantic was restimulated when I lived in New York City while working at the Ford Foundation during the first decade of the twenty-first century. On my return from a visit to India, I made a quick side trip to Liverpool, England, to visit the International Slavery Museum, which had opened in August of 2007. A first of its kind, the museum looks at historical and contemporary slavery and explores human rights issues. The vision for the museum, set out by its founding director, Dr. David Fleming, in the brochure I picked up, particularly moved me:

The transatlantic slave trade was the greatest forced migration in history. And yet the story of the mass enslavement of Africans by Europeans is one of resilience and survival against all the odds, and is a testament to the unquenchable nature of the human spirit. . . .

Our aim is to address ignorance and misunderstanding by looking at the deep and permanent impact of slavery and the slave trade on Africa, South America, the United States, the Caribbean and Western Europe. Thus we will increase our understanding of the world around us. (International Slavery Museum 2017)

The mercantile cities on the Atlantic rim can be seen as both a tragedy and a triumph of globalization. The tragedy is the wanton desecration of people and nature by a small group of humans who appropriated planetary resources and the wealth and labor of human populations to satisfy their greed and desire for self-aggrandizement. This dubious accomplishment transformed living environments into industrial units of production whose benefits and burdens accrue to all of us. For indigenous cultures destroyed by mercantilism, for populations left behind by the rank opportunism of European expansion, and for descendants of captured and exploited Africans, it is essential to retell the story of the slave trade and the rise of wealthy maritime cities.

Slavery was at the heart of a trans-Atlantic triangular trade pattern. Merchant ships sailed from Europe to Africa exchanging manufactured goods—guns and gunpowder, rum, glass beads, metals, and textiles for ornamentation—for black people at a profit and then transporting their human cargo across the ocean and selling the enslaved Africans to colonists, merchants, and planters in North America, the Caribbean, or South America for another round of profit. Finally, the ships transported goods grown and harvested by African slaves—sugar, rice, tobacco, and cotton—back to Europe for a third round of profit. At the core of city building in places like Liverpool was a plainly expressed and unambiguous desire to take advantage of this very profitable system. The huge accumulations of capital generated by this process funded maritime enterprises, factories, and the development of port cities, as well as the lifestyles of the elite.

People had been captured and sold in Africa (and in many other places) since ancient times, but the trans-Atlantic slave trade marked the beginning of a different relationship between people and planet Earth as a whole, particularly with its oceans. Before Europeans mastered the arts of shipbuilding and seafaring, the Atlantic Ocean had been a barrier. Subsequently, it became a connector, and England’s proximity to it was a big advantage in the new game of transporting people and goods from one continent to the other.

Raw materials from the New World built wealth in Europe and the colonies. Meanwhile, in the American South, descendants of African people worked the land—in some places, as many as twelve generations—without receiving the benefit of their labor. Slaving under the hot sun, they cleared forests, drained swamps, unloaded ships, built roads, and planted and harvested cash crops that made their masters wealthy.

In "The Half Has Never Been Told", Edward Baptist draws on slave narratives, plantation records, and other primary sources to create a poignant narrative demonstrating how US entrepreneurs used slavery to create a cotton empire and build a modern industrial capitalist economy. The labor of African slaves was used not only for plantation agriculture but also to build infrastructure in emerging urban centers, like New York City:

Slaves constructed Fort Amsterdam and its successors along the Battery. They built the wall from which Wall Street gets its name. They built the roads, the docks, and most of the important buildings of the early city—the first city hall, the first Dutch and English churches, Fraunces Tavern, the city prison and the city hospital. (New-York Historical Society 2016)

In 1991, construction workers in Lower Manhattan discovered a seventeenth-century burial ground for both free and enslaved Africans during an excavation for building a federal office building. After years of scientific, archeological, and historical research, the General Services Administration partnered with the National Parks Service to dedicate, create, and open the African Burial Ground National Monument and visitor center in 2007. I was fortunate to be living in Manhattan at the time and closely followed the reports and reflections in the media. I wondered about the relationship between the Lower Manhattan of the seventeenth and eighteenth centuries and the Lower Manhattan of the twenty-first century—an integral center of the global economy. I asked myself what the significance of this rediscovery might be for contemporary urban planning and development. My first thought was that people would become more conscious of the impact and significance of historical underpinnings like the kidnapping and exploitation of African people. Such awareness can lead to a deeper understanding and greater capacity for resolving problems we face today.

In the eighteenth and nineteenth centuries, entrepreneurs in the North capitalized on the expanding production and trade of cotton and sugar in the South to make New York City the leading port and global financial center. It is no surprise that African Americans—enslaved and free—provided the bulk of the labor that built not only the New York infrastructure but also the White House, the US Capitol, and other early government buildings. In order to assume any kind of moral authority in today’s world, Americans need to understand and acknowledge their enormous debt to black people, as well as to the indigenous people from whom they took the land. It has become increasingly apparent that Americans owe enslaved Africans and their descendants deep appreciation and an enormous debt of gratitude. No amount of reparations could repay the debt incurred.

Recognition of the price paid in human life and liberty for economic advancement—and the costs of resources extracted as nature’s systems were exploited—must inform and guide us as we work to transform our cities and regions. We must forge a new path illuminated by justice, respect for the dignity of each and every human being, and determination to maintain and restore the web of life as the foundation for health and sustainability.

Carl Anthony is an architect, regional planner, and social justice leader. He is currently co-founder of the Breakthrough Communities Project and Visiting Professor at the UC Davis Center for Regional Change. Anthony is revered as the founder and former executive director of Urban Habitat, one of the country's oldest environmental justice organizations, known for pushing the mainstream environmental movement to confront issues of race and class. He still serves on its board of directors. Anthony has taught at the Columbia University Graduate School of Architecture and Planning and the University of California Colleges of Environmental Design and Natural Resources. He has been an advisor to the Stanford University Law School on issues of environmental justice. Mr. Anthony has a professional degree in architecture from Columbia University. In 1996, he was appointed Fellow at the Institute of Politics, John F. Kennedy School of Government, Harvard University.