Despite media obfuscation, last week's meeting between Putin and Assad suggests a new order in the Middle East 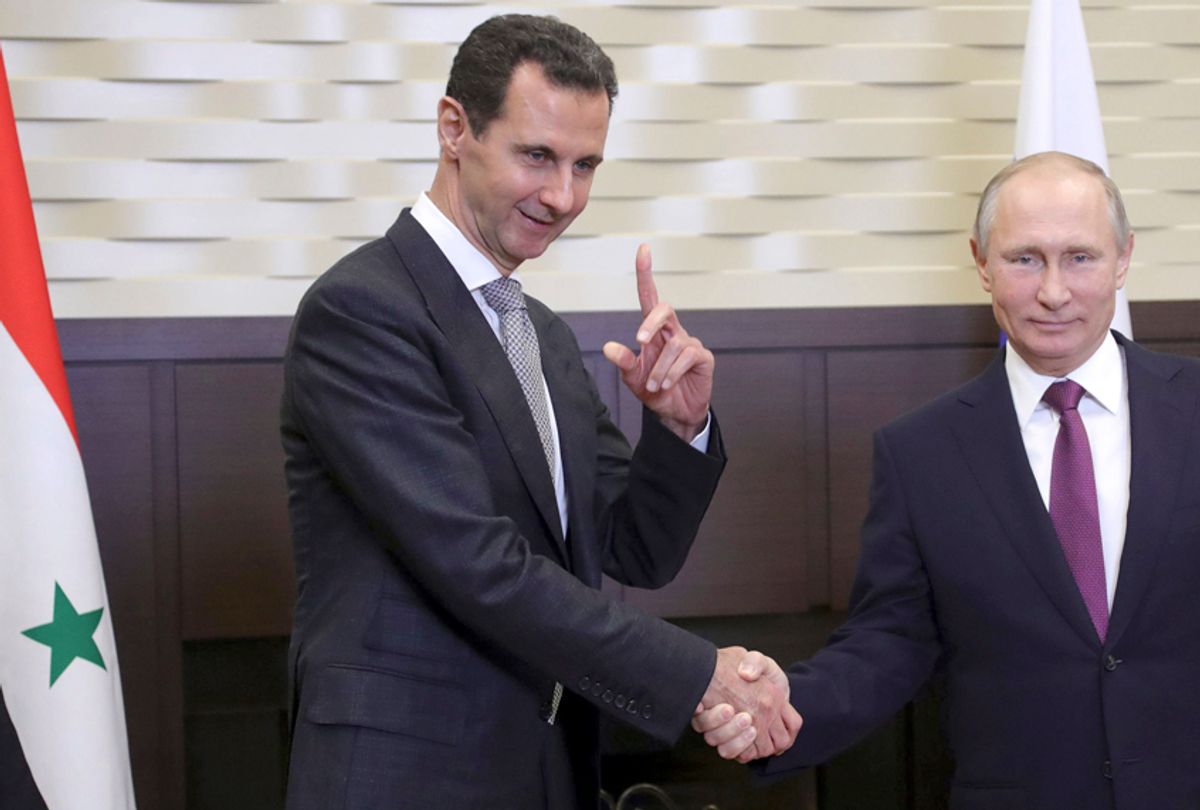 I kept hearing National Public Radio programs this week to the effect that liberals and “progressives,” not to mention those in the honorable “Resistance,” dreaded talking about politics over Thanksgiving dinner. Leave it to NPR, they took opinion surveys to make the point. One understands: Who wants to hear from Trump-supporting Uncle Harry about the fatal arrogance of liberal righteousness and how “Russiagate” now tips into vaudeville? It would be “stressful,” as one radio presenter put it.

Let us have some happy talk this weekend, NPR–style. I nominate Bashar al-Assad meets Vladimir Putin in Sochi, the Black Sea town the Russian leader favors. This is a sensible, down-to-earth alternative to politics, I would say.

The Syrian and Russian presidents spent last Monday talking by the seaside, as was widely reported. This was their first encounter since the fall of 2015, just after Russia, fed up with American support for jihadists in the service of another “regime change” operation, intervened to turn the war to Damascus’ advantage. The occasion this time is just as momentous. The war has entered it mop-up phase; it is time to structure a political solution. This was Putin’s explicit point.

Fold into this the telephone exchange Putin had Tuesday with President Trump. It was an hour long. A settlement in Syria was the primary but not the only topic, we are told. And note this connection: Putin’s report to the Trump White House on his talks with Assad came 10 days after the Russian and American presidents agreed in Vietnam to make a concerted effort to end the Syria tragedy.

There is a great deal of good in these events. There may be many readers incapable of seeing this, such has been the astounding wall of propaganda erected to obscure a plain view of the Syria crisis. Accommodations to reality are now not likely to be far off. The media are already making theirs, a point I will revisit.

The war in Syria indeed draws to an end, most obviously. There will be more mess, in all likelihood — wars almost always having frayed ends — but the outcome is clear. The Islamic State, along with the sectarian Salafists the U.S. financed and armed, are headed into history. Syria will remain intact — averting, if narrowly, failed-state status. The Putin-Assad meeting anticipated by a week another round of the peace talks Russia, Iran and Turkey have sponsored all year. In effect, the Russian leader has just shown Assad his chair at the mahogany table.

On  Wednesday Moscow media quoted Putin as advising all sides, including Damascus, that they are in for compromise come next Tuesday. Simultaneously, Iran and Turkey agreed to support a Russian-sponsored “peace congress,” date unspecified, with very large ambitions. These include “a framework for the future structure of the state,” as Putin put it, “the adoption of a new constitution, and, on the basis of that, the holding of elections under United Nations supervision.” It remains for Assad’s adversaries, now fractured, to develop a unified position.

All positive. Significant as these developments are, however, there are larger implications to consider. They are numerous, for this shapes up as a potentially consequential moment in the Middle East story. They are not to be missed, much as our corporate media do their best to mask them.

Pulling Assad into the talks in Astana, the Kazakh capital where they are held, is an act of considerable confidence in Putin’s part. His object since the first bombing runs of Russian jets two years ago has been to draw a line under the rampant disorder that has enveloped Syria for seven years. Look at a map: Moscow could have no other sensible objective. In the process of pursuing this, Russia has emerged — suddenly, out of nowhere — as an influence in the Middle East that may soon supersede Washington, if it has not already.

Suddenly and not so suddenly. When Russia, Iran and Turkey agreed to sponsor the Astana talks a year ago next month — quickly declaring themselves guarantors of a settlement in Syria — they effectively outlined  an alliance that seems about to replace Washington’s traditional strategic framework. That has long rested primarily on ties to Israel, the Saudis and the Gulf monarchies. But the Moscow–Tehran–Ankara triangle starts to make that look like yesterday.

Renewed alignments and realignments have proceeded apace for much of this year. King Salman spent four days summiting in Moscow a few months ago — a stunning signal of new thinking in Saudi Arabia since he took the throne not quite two years ago. Turkey and Russia, viciously at odds when the latter first entered the Syrian conflict on Damascus’ behalf, are now cooperating as allies. Note in this connection a senior Turkish minister’s suggestion last week that Turkey’s NATO membership has to be reconsidered. Where does this end, you have to ask?

Between Moscow and Tehran, it is the same story: Old, uneven ties are now consolidated, and a dense weave of agreements — diplomatic, political, economic, industrial, financial — elaborates as we speak. For what it is worth — and I cannot evaluate this — even Benjamin Netanyahu, the Israeli prime minister, includes Putin in his loop since the outcome in Syria became evident some months ago.

The take-home here: Watch what transpires in Astana this coming week. For my money it is too soon to consider the Russian leader the new maestro among outside powers in the Middle East, but there are respected commentators who think this view is too cautious. The record so far is good: Russia is without question leading an effective multilateral effort to bring peace and an acceptable political settlement to a nation whose tragedy the U.S.–led “coalition” has long been intent on prolonging.

Another implication of the Assad-Putin meeting has to do with what are called regime changes in Washington, known in plain English as U.S.–sponsored coups. In my read, it has been Moscow’s intention for some years to put Washington on notice: The era of regime change is over. Any more of them will meet whatever resistance is necessary to block them.

Chronology helps here. Moscow’s first move in this direction followed the American-cultivated coup in Ukraine in February 2014. It was 18 months later that the first Russian bombs dropped on Islamic State militias and other anti–Damascus jihadists who enjoyed U.S. support. I rest my case on this succession of events. And I applaud Washington’s failures in both cases, of course. In Ukraine the U.S. got its coup, but got no further in its effort to draw up to Russia’s western borders. It is now stuck with an intractably corrupt regime in Kiev, an economy on life support from the International Monetary Fund, and responsibility for a lot of pointless suffering. In Syria the result speaks for itself — at least so far.

I read it as consequential that the theme of the Trump–Putin exchange earlier this week included crises such as Syria and Ukraine. Trump came to office opposed to Washington’s wars of adventure and its wasteful, disorder-inducing interventions. There are two suggestions here: One, Trump has not surrendered his belief that a neo-détente with Russia is in the interests of both nations. Two, he appears to be just as interested as he was when campaigning to counter the liberal-interventionist ethos still prevalent in Washington.

Now we have to watch. There are already abundant indications that Trump is engaged in the same war John Kerry fought with the Pentagon and the intelligence apparatus whenever he attempted settlements that involved Russia. Not coincidentally, these erupted in both Ukraine and Syria during Kerry’s time as Obama’s secretary of state. Kerry waged this fight unevenly and ultimately without apparent conviction, it must be said. As for Trump, he has at times caved, often cravenly and far more openly, to “my generals,” as he called them last spring. But he seems to reassert his expressed convictions whenever he is left to his own devices — as he was with Putin in Vietnam, and as he was on the telephone earlier this week. I read this positively.

I loved the New York Times coverage of Assad’s day at the beach with Putin, and then the Trump telephone call. Americans never lose in the news columns of the government-supervised Times. There are no defeats — only questions that, for some peculiar reason, Washington has stopped caring about. “Things are obviously complicated with Russia,” the Times quoted a State Department spokeswoman saying the other day. That seems to be where the truth began and ended in what was once the newspaper of record when it reported on Syria this week.

“The leaders of Iran, Turkey and Russia have taken an increasingly prominent role in diplomacy with Syria,” the paper reported Wednesday, “while the United States has put Mr. Assad’s fate on the back burner.” Translation: Three nations no longer willing to tolerate American subterfuge in Syria have pushed it aside and have taken charge of a peace process Washington has never shown serious interest in cultivating. As to back-burnering its regime-change operation, we will have to see.

What were Putin and Assad taking about after they embraced in Sochi? This is a good one.

“I think that hug is proof that Vladimir Putin bears a certain responsibility for trying to help out Syria,” the same State Department flak said, “for trying to get Bashar al-Assad … to put pressure on Bashar al-Assad so they don’t do something like that again.” The “something like that” refers to the use of chemical weapons. Nothing more to the Sochi summit. I see. I think I see. At least I think I think I see. It was all about a much-disputed, corruptly investigated episode several months ago. The photograph of two statesmen greeting one another proves it.

As to the Trump-Putin telephone call, that was merely “another signal that political change in Syria is less and less an international priority,” the Times reported. Say what? It does get tough to read the Times on occasion. Sometimes the paper’s commitment to obfuscation in behalf of the official versions of events overtakes even the simplest logic.

Scrape it away, readers. Washington has lost in Syria. This is what the Times was mumbling about after Assad and Putin met. U.S. alliances with some of the world’s most reactionary despots may become a thing of the past. Its regime-change habit has been effectively challenged.

How is this for happy talk? There are no certainties here. It is not clear whether the U.S. will desist on Syrian soil, even after the war is decisively over. It has, do not forget, rushed to build temporary (and illegal) bases in southern Syria of late. But this week’s news will do for now.