How the Camelot myth was born: Reflections on JFK's public execution

No full investigation of JFK's murder ever happened. And whether Oswald acted alone isn't the big question 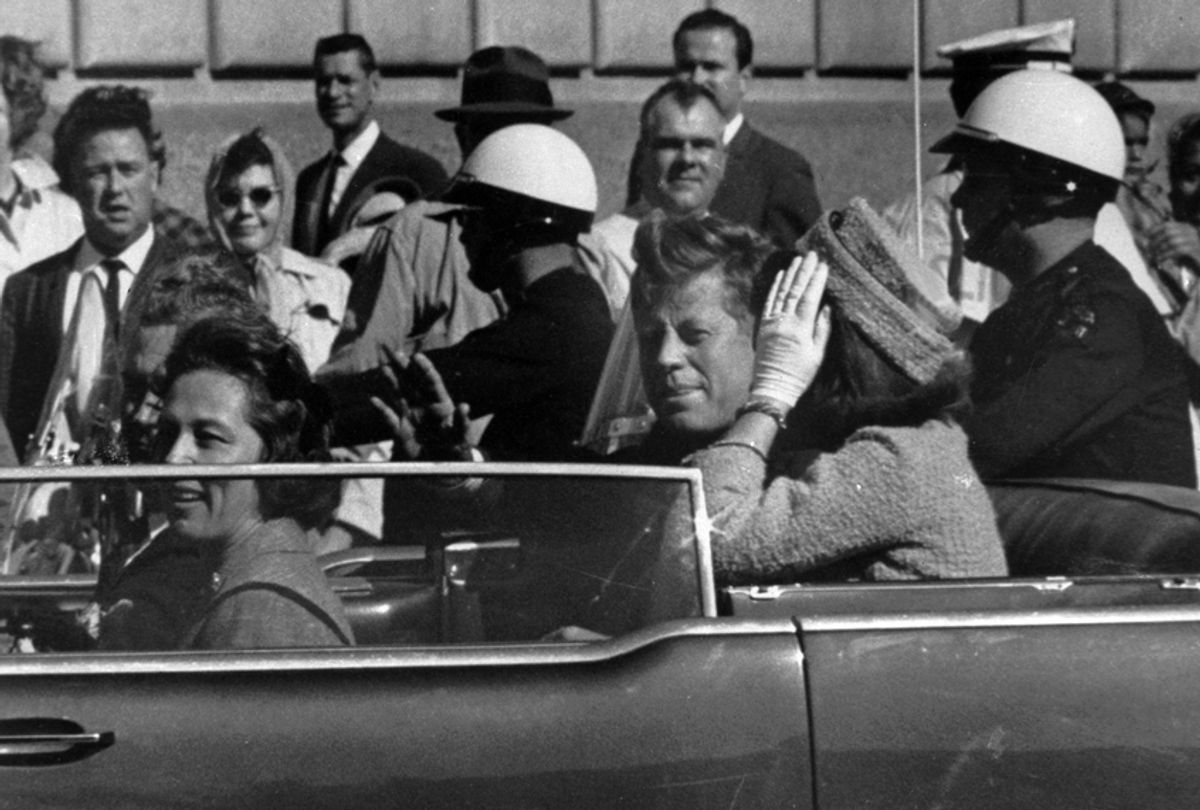 This month it is 54 years since President John F. Kennedy’s public execution. I was in the third grade at the Richard E. Byrd School in Glen Rock, New Jersey, when I found out he had been assassinated. As an Irish Catholic kid in a household obsessed with JFK, I had followed the ups and and downs of his 1960 primary campaign. I attribute my lifelong interest in politics and my career in journalism to that early engagement in our nation’s narrative.

A case can be made that the first crack in the public’s confidence in the news media, a crack candidate Donald Trump masterfully exploited, can be traced back to those bloody days in Dallas when Kennedy was killed and Lee Harvey Oswald’s murder was also televised. Within days of the back-to-back murders, the black-and-white movie newsreels proclaimed for the nation, with Dragnet-type theme music underneath, that the assassin had been caught and killed by a man who “took the law into his own hands.”

Even today, opinion polls show a majority of Americans still aren’t buying it. For decades, the corporate news media has marched in lockstep endorsement of the government’s official "lone gunman" theory of the case, even though we now have evidence the theory was conceived in the immediate aftermath of JFK’s murder.

For me now, at age 62, this anniversary also marks just how our society has positively evolved with the diminishing ability of male power to preserve its privilege. Decades of coverups have been blown apart in just a few news cycles.

And there is a viral purge of powerful men, a forest of towering giants in the media, government, the arts and business, all clear-cut by allegations of sexual misconduct on the job. In case after case, men at the pinnacle of their personal power have used their position to try and get sexual gratification from women that the org chart said were subordinates.

Why, this tsunami of rightful female rage has enough velocity to resurface President Clinton’s asymmetrical sexual predations. Yet you don’t get a Bill Clinton without a Jack Kennedy.

In all the hagiography around our 35th president, we have yet to reconcile his sexual addiction, which has been documented even by National Geographic. Since forever there’s been this notion that our “great men” are entitled to great appetites. How else would we know them? What’s the point of being in charge if you can’t dominate and exploit everything in your dominion?

In retrospect, it is easy to understand how the national security state, as presided over by FBI Director J. Edgar Hoover, who had his own closet issues, and the Kennedy brain trust, had a mutual interest in seeing to it that there was never a real homicide investigation into JFK’s death. The Kennedy brand and the covert national security apparatus would not have survived it.

For me, this has always been the critical inflection point that is lost in all the cacophony over whether or not Oswald acted alone. To go down that rabbit hole is to miss the really big takeaway from JFK’s murder and the creation of the official mythopoetic narrative of his life and death.

It served to burnish the JFK legacy and concealed the extent of the national security state’s covert actions, right as things were starting to cook in Southeast Asia.

Think about it. By keeping the lid on the depth and breadth of our national security state it was possible for it to go on and stage COINTELPRO, the extra-legal targeting of Black Panthers, student radicals and other dissident Americans. Not long after JFK’s murder, the FBI still had the cover it needed to anonymously write a letter to Martin Luther King Jr to try and convince the civil rights leader to kill himself.

Surely, a truly independent investigation into JFK’s murder, without a predetermined outcome, would have revealed all the FBI knew about JFK’s womanizing and about Oswald’s movements before the assassination. No doubt that would have prompted the public to ask why, if they knew so much about Oswald before the JFK murder, they managed to lose track of him.

For the Kennedys, anything short of the Camelot epitaph would have been problematic for the family brand. For Hoover and the folks at the CIA, the intellectual exercise of asking who might have had a motive for killing JFK would also have meant exposing the numerous extralegal political assassinations the U.S. had supported all over the world.

In the latest reporting on the partial release of the long-awaited national security JFK files, the news media reported as “breaking news” that just 48 hours after the killing, FBI Director Edgar J. Hoover decreed there would be only one narrative advanced — that Lee Harvey Oswald was the lone gunmen.

But that data point hanging out there without context is just more faux news. Back in 1994, at the height of the dust-up over Oliver Stone’s movie JFK, Jerry Polikoff and I wrote a cover story for the Village Voice entitled “How Time-Life, the New York Times, and CBS Killed the Conspiracy Theory.”

Through the happy circumstance of my lawyer wife, Debbie, working for Riker Danzig — where former Attorney General Nicholas Katzenbach was working in the early 1990s — I was able to interview him about what went on in the immediate aftermath of JFK’s murder. As No. 2 at the Department of Justice under Attorney General Robert F. Kennedy, it fell to Katzenbach to step up and run things because his boss was too distraught to lead the agency. According to Katzenbach, it was RFK who dismissed getting to the bottom of who killed his older brother.

J. Edgar Hoover, supreme patriarch of the FBI and all-powerful with a distraught Robert Kennedy out of the way, knew just how to exploit the opportunity. Deputy Attorney General Nicholas Katzenbach recalls that Robert Kennedy, attorney general at the time, was so despondent he didn’t even see the point of an investigation. "What the hell’s the difference? He’s gone," Katzenbach remembers RFK saying before handing over the reins.

Just three days after the assassination an internal Justice Department memo from Katzenbach to Bill Moyers, then a top aide to Lyndon Johnson, spelled out the Justice Department’s strategy, a strategy that would prevail to a shocking degree right through the end of the decade:

"1. The public must be satisfied that Oswald was the assassin; that he did not have confederates who are still at large; and that the evidence was such that he would have been convicted at trial.

"2. Speculation about Oswald’s motivation ought to be cut off, and we should have some basis for rebutting thought that this was a Communist conspiracy or (as the Iron Curtain press is saying) a right-wing conspiracy to blame it on the Communists. Unfortunately the facts on Oswald seem about too pat – too obvious (Marxist, Cuba, Russian wife, etc.). The Dallas police have put out statements on the Communist conspiracy theory, and it was they who were in charge when he was shot and thus silenced."

Katzenbach, whose memo sets out the Warren report results a year before the commission reached them, suggests that a “Presidential Commission of unimpeachable personnel” be appointed to examine evidence and reach conclusions. In closing he writes, “I think, however, that a statement that all the facts will be made public property in an orderly and responsible way should be made now. We need something to head off public speculation or Congressional hearings of the wrong sort.”

Fifty-four years later, the national security state is still holding on to JFK material and redacted much of what they have released.

The Senate’s Church committee report, issued in 1976, confirmed that while investigating the murder “top FBI officials were continually concerned with protecting the Bureau’s reputation.” Even Katzenbach in our interview conceded that Hoover would never “let the agency be embarrassed by any information on the bureau itself. He just would never show it. But how would you know it? What could you do?”

Back in 1994, we obtained an FBI memo that documented how easy it was for Hoover to get the the “free press” under control. On Nov. 25, 1963, the White House learned that The Washington Post planned an editorial calling for the convening of a presidential commission to investigate the assassination. Though Lyndon Johnson planned to do just that, the strategy was to get the FBI report out first. The memo states that Katzenbach called Washington Post editor Russell Wiggins and told him that “the Department of Justice seriously hoped that the Washington Post would not encourage any specific means” by which the facts should be made available to the public.

The memo also describes a conversation an FBI agent had with Al Friendly, the Post’s managing editor, discouraging publication of the editorial and suggesting that it would “merely 'muddy the waters’ and would create further confusion and hysteria.” The editorial never appeared. Later that day, Hoover triumphantly boasted in another FBI memo that “I called Mr. Walter Jenkins at the White House and advised him that we had killed the editorial in the Post.”

Back in 1994, we wrote in the Village Voice: “The FBI had the electronic media wired as well. A December 11, 1963, teletype from the FBI office in New York to J. Edgar Hoover indicates that NBC had given the bureau assurances that it would 'televise only those items which are in consonance with bureau report [on the assassination].'”

For the national security state, the priority had always been to control the narrative at any price. A truly open inquiry into the JFK murder was too fraught with potential unknowns and potential problematic disclosures. Give the people a hero and a bedtime story and let destiny sort out the rest. The corporate news media, back in 1963, were entirely agents of that national security state. Thus the Camelot myth was born.