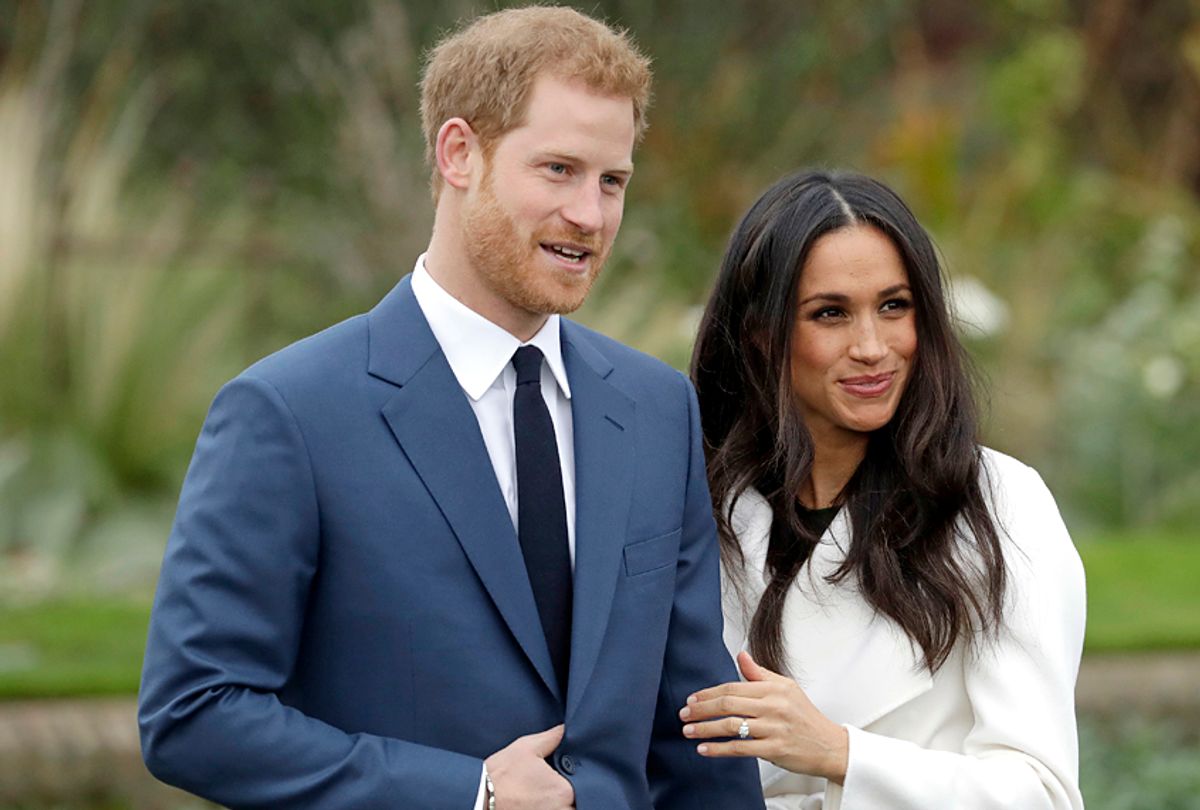 His Royal Highness Prince Henry of Wales, Captain of The Blues and Royals, Knight Commander of the Royal Victorian Order and fifth (but soon to be sixth) in the line of succession to the British Crown, announced Monday morning that he would wed the American actor, model and activist Rachel Meghan Markle in 2018.

It will be the first marriage for Prince Henry, also known as Harry Wales, 33, and the second for Markle, professionally known as Meghan Markle, 36. The couple, who have been in a relationship since at least June of 2016, have said that they plan to wed next spring and, oh man, it is just too hard to care.

That's not to say that there aren't fascinating elements to the coupling of the former wild boy of the Windsor line and the former star of USA's "Suits." There totally are!

For one, much as the pairing of King Edward VIII and Wallis Simpson, Harry and Markle's relationship is one between a highly visible member of the British Royal family and an American divorcee. That there is so little controversy over their impending marriage relative to the national fervor tied to Edward's affair with Simpson — one that, among other things, caused the king to abdicate his throne in 1936 — says at least something about changing attitudes and mores concerning propriety, divorce, nationality and the role of royalty.

That Markle defines herself as "mixed-race" (her mother is African-American) also speaks to shifting perspectives on identity. Though their possible children would be far from the Crown — the current running theory is that Harry's first-born would be seventh in line — they still would be the closest to the Throne of the United Kingdom a person of multiethnic, non-white ancestry has ever been in modern reckoning (there's suggestion that Queen Charlotte, mother to George IV, was part black, but it's a theory with thin results).

As well, Markle is the first individual from the once-disgraceful acting profession to be in the possible position of mothering children so close to the Crown. She is also, relative to most women who marry into the Windsor clan, self made, even if she did go to private schools and her father was also successful in the entertainment industry.

Markle was also raised — gasp — Catholic. Whether she'll convert to Anglicism, the church of which her future grandmother-in-law is head, is unknown at this time. There's no sign now that she will, and unless she does, any children she has with the Prince of Wales will be raised with awareness of both traditions in a manner now familiar to many families across many societies.

Overall, her inclusion into the royal family, the welcome the Windsors have given her, is a profoundly modern, welcomely progressive moment on many levels. It's a good thing, one supposes. Just look at how positively certain people from mixed-race and mixed-faith marriages are reacting. As the Guardian's official editorial stance on the whole announcement says, "That’s nice."

But it's also really, totally, 100 percent fine for you not to give one sweet flying fig about any of this.

Yes, there's a progressive undercurrent to this announcement, but it comes within the context of news about a family that represents a vestigial node left behind by an ancient, hereditary system of entitlements linked inextricably to unearned privilege, autocratic rule by force and a system of labor not significantly discernible from slavery. Not to get too republican on you — in the British sense of the word — but there's not much use for the Windsors outside of branding at this point. Nothing you should care about there.

If that's a little too heavy for you, maybe it's better just to consider this as a fairly privileged, highly attractive person announcing that she's settling down with a slightly less attractive, significantly more privileged person. They both seem like decent, humanitarian-minded folks — poor costume choices notwithstanding — with healthy eating habits, who will do a fair amount of good in the world by applying their privilege to positive ends, but it's not much beyond that. As noted, no one in this particular branch of the House of Windsor is going to wear the Crown, and even if they did, so what? Not your problem.

Oddly enough, we have a highly progressive bunch of people representing the future of one of the world's most conservative institutions, the British Monarchy. But so what? This progressivism, this inclusivity and all the other values elements of the House of Windsor forward — environmentalism, human rights, equality, etc. — exist within a bubble at the top of the food chain, where it isn't really a concern.

We've seen this kind of progressivism in walled, protective villages of privilege before (Hollywood is a perfect example). While it is sometimes of value, it is also markedly ineffective. Prince Charles' sustainable food-to-table gardening, for instance, is good and produces some results. It's fine. But it's unappreciable in the face of larger consumer and industrial trends, which kind of makes it hard to sweat over any of it, given that the world is pretty much melting in front of us.

And, yes, the public embrace of Harry's chosen partner may be edifying for those of us who think that, yes, people of all religions and races are equally human, but it's of little value in a time where all things, including race and religious relations are more prickly and sour. The marriage of the Prince of Wales and Markle is not much more than a pleasant, quick burst of sunshine when even the British government is brimming with intolerance.

So, yes, for those who are activated towards worthy causes, it's fine if this news elicits a fast grin. But it's just as okay if repeated posts about whose diamonds Harry used for the ring or whether the Queens' Corgis like Meghan Markle or not make you roll your eyeballs. But the prince is getting married, and that's good enough for him. Or not. Your choice.