John Conyers has resigned his Judiciary Committee post, but that won't end Democrats' troubles with him 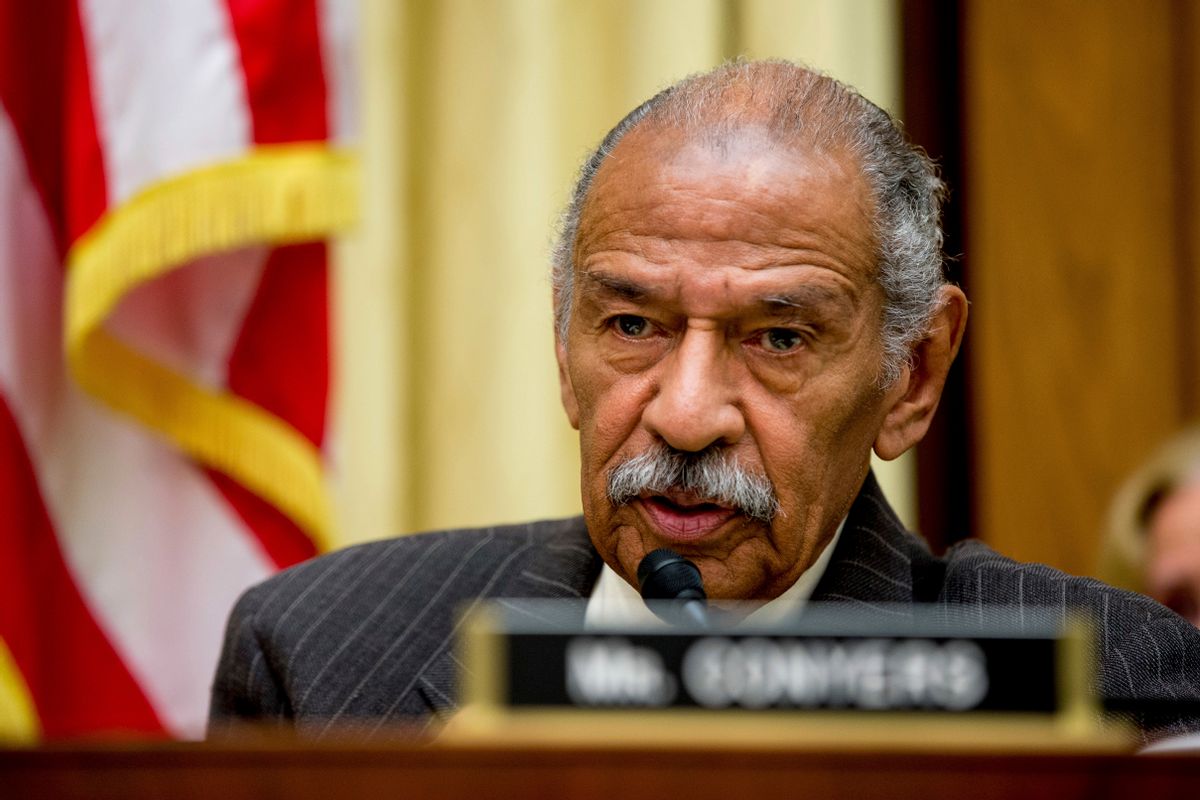 FILE - In this May 24, 2016, file photo, Rep. John Conyers, D-Mich., ranking member on the House Judiciary Committee, speaks on Capitol Hill in Washington during a hearing. Police in Houston say they're searching for Conyers' son after he was reported missing this week. Twenty-one-year-old Carl Conyers, a student at the University of Houston, was last seen Tuesday by his roommate. (AP Photo/Andrew Harnik, File) (AP)
--

The controversy began last week, after BuzzFeed published several legal documents which described a number of accusations from former employees against the long-serving Michigan congressman, including how he reached a formal settlement with a woman whose name has not yet been revealed. In an affidavit filed with the Office of Compliance, a secretive agency which functions somewhat similar to a human resources department for Congress, the former employee alleged that Conyers repeatedly asked her to perform sex acts on him, including asking her to touch his genitals and requesting that she "cuddle up with me and caress me." Other Conyers staffers filed documents saying that they saw the congressman touch the body parts of several employees.

Since the BuzzFeed story was published, several news organizations revealed that another former employee had accused Conyers of harassment. Maria Reddick, his former appointments secretary, filed a lawsuit earlier in 2017 accusing the Michigan Democrat of kissing and rubbing her in an unwanted manner. After she refused to assent to his advances, Reddick said that she was fired. She withdrew her suit after a judge ruled that the proceedings would not be sealed from public disclosure.

After the BuzzFeed story was published, the House's Ethics Committee announced it had begun an inquiry into his behavior. None of the allegations against Conyers had previously led the committee to investigate the Democrat, who has held his seat in Congress since 1965.

Conyers' long tenure as an elected official and his status as a founder of the Congressional Black Caucus and former association with Martin Luther King Jr. has left some of the people who have worked with him to believe the allegations would not harm him.

“Your story won’t do shit to him,” an anonymous Conyers staffer told BuzzFeed. “He’s untouchable.”

Despite Conyers' power, however, some Democrats have been moving behind the scenes to get him to resign his position as the top member of the House Judiciary Committee. Even before the sexual harassment allegations against him became public knowledge, Conyers' Judiciary colleagues had been trying to oust him from his position, in part, because they believed that at 88 years of age he is too old for the job.

According to The New York Times, Conyers has attended two public meetings while wearing his pajamas. In her lawsuit brief, Reddick alleged that due to Conyers' "failing mental capacity," she was assigned to track his whereabouts at all times, call him in the morning to wake him up, and ensure that he ordered and took his medication.

Nancy Pelosi, the party's leader in the House of Representatives, has been trying to manage the sexual harassment complaints against Conyers in private, but her public remarks have only managed to inflame the situation. In a Sunday interview with NBC's "Meet the Press," she called Conyers "an icon in our country" and refused to call for his resignation. She also implied that Conyers' policy viewpoints with regard to some women's issues were relevant to the matter at hand.

"He has done a great deal to protect women,” Pelosi offered.

After Conyers formally resigned from his Judiciary Committee post mere hours later, the former Speaker of the House was much more critical.

“No matter how great an individual’s legacy, it is not a license for harassment,” Pelosi said in her later public statement.

The allegations against Conyers are likely to be a significant problem for Democrats going forward, especially since other women are likely to come forward with accusations against him. On Wednesday, The Washington Post published a story describing allegations from Melanie Sloan, another former Conyers employee who says that the congressman repeatedly subjected her to verbal abuse and once requested her to come into his office while he was in his underwear.

On Sunday, Lisa Bloom, an attorney who specializes in sexual harassment complaints, announced that she represented the woman described in the BuzzFeed story and that her client was willing to testify publicly against Conyers if she were subpoenaed by the House Ethics Committee. But as Sloan, a D.C.-based ethics lawyer, noted on Monday, "The House Ethics Committee has never been known for taking a tough stance for unethical conduct by any member of Congress."

The former head of Citizens for Responsibility and Ethics in Washington (CREW), who worked for Conyers from 1995 to 1998, told Fox News that the House Ethics Committee is "often just a black hole where allegations go to die, we never hear about them again."

Thus far, only one Democratic elected official has called for Conyers to resign his House seat.

"Rep. John Conyers should resign. I've reviewed the allegations against him, and they're as credible as they are repulsive," Rep. Kathleen Rice said in a Wednesday news release. "Whether it happened 40 years ago or last week, settlement or no settlement, Democrat or Republican — harassment is harassment, assault is assault."

Conyers' presence in Congress is sure to be useful to Republicans eager to deflect public opprobrium against Alabama Senate candidate Roy Moore, who is facing allegations that he molested two teenagers and grabbed the buttocks of a woman several decades ago.

That is evident from the fact that the initial BuzzFeed story that started the controversy was given to the website by Mike Cernovich, a conservative activist and sometime social media troll who is known as a devoted supporter of President Donald Trump. Since BuzzFeed published its piece based upon documents he had provided, Cernovich has repeatedly promoted the allegations.

"Roy Moore - not in Senate, told to drop out of race, never been sued for sexual harassment," he wrote on Twitter. " John Conyers - settled one lawsuit, sued multiple times, not one call from members of Congress to resign."

Fox News has also played them up widely online and during its television programming. A number of left-leaning political commentators have also expressed concern that unless Pelosi and other Democrats take more decisive action against Conyers they will destroy the recent social momentum that has been building online to encourage women to stop hiding their stories of sexual harassment victimization.