Two prominent investment analysts on why the FCC's new order went so far so fast, and who will roll it back 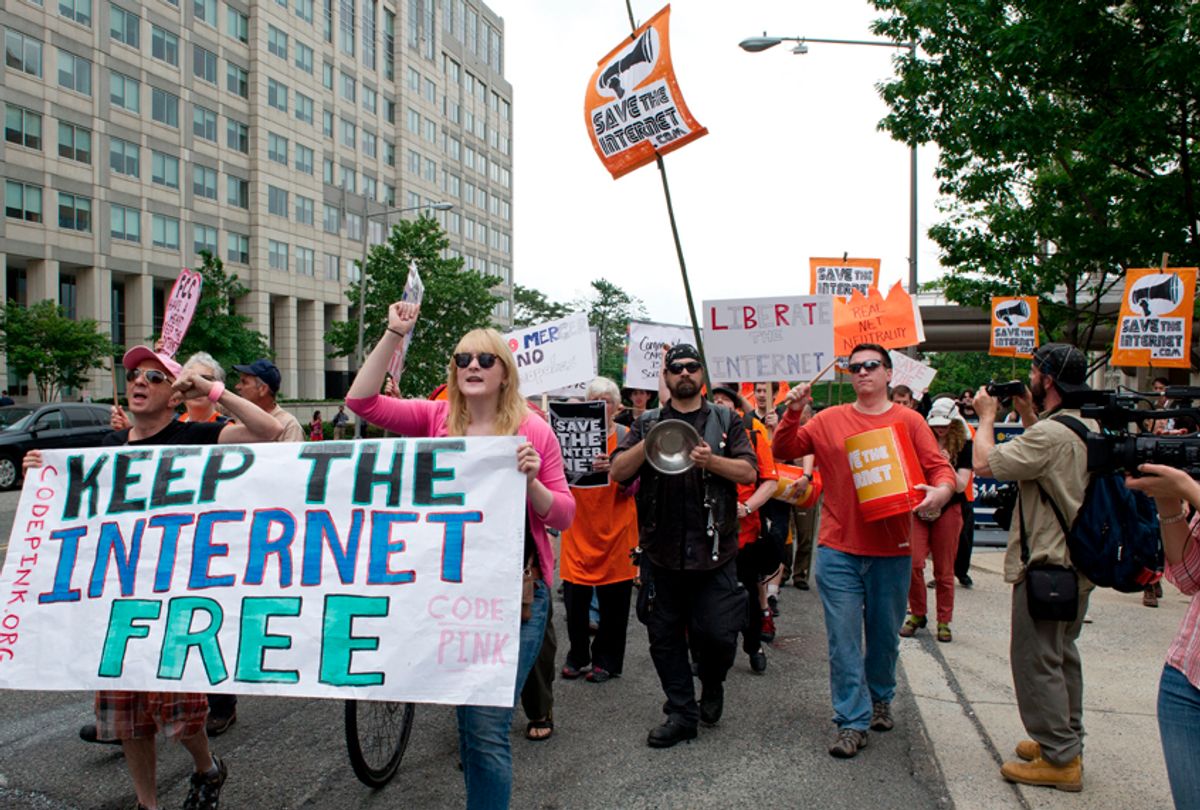 Protesters hold a rally to support "net neutrality" on May 15, 2014 at the FCC in Washington, DC. (Getty/Karen Bleier)
--

This article originally appeared as a letter to investors from the independent research firm MoffettNathanson, LLC. Published by permission.

We've known since the election that the FCC would reverse Title II. But we never expected this.

Last week’s FCC draft order on net neutrality went much further than we ever could've imagined in not only reversing Title II, but in dismantling virtually all of the important tenets of net neutrality itself. (You can think of net neutrality as the core principle of treating all legal content the same, and Title II as merely the enforcement regime, albeit one with a great many unintended consequences, including the risk of price regulation.)

On the surface, the draft order would seem to be nothing but good news for cable and telecom carriers. Under the proposed rules, broadband service providers would not only be given the right to charge higher rates for prioritization – a controversial but arguably reasonable freedom that would enable a great many new services, particularly in health care – but even to selectively degrade certain services at their own discretion. At the very least, the draft order would seemingly open the door to much higher interconnection charges (i.e., where ISPs like Comcast and/or Verizon could charge higher fees for interconnection and edge delivery to “edge providers” like Netflix or Google). It requires only that broadband providers are transparent about whatever it is that they choose to do. Oh, and for good measure, it preempts states from enacting anything that would contradict the FCC’s new rules.

To judge by the public commentary, even the carriers themselves seem to suspect that this seeming good fortune will prove transitory. A more limited reversal might have stood a better chance of standing for a while.

One obvious problem with anything out of the FCC on what has become such a hyper-partisan topic is that it can so easily be reversed by the next (Democratic) FCC. At the very least, the current draft order seems to be all but begging for a future FCC reversal (re-reversal?). But last week's draft order seems designed to be even shorter-lived than that.

We wrote earlier this year that there might be a path forward for a Republican Congress to write legislation that would effect a compromise, restoring the principles of net neutrality in return for the elimination of Title II. By this theory, the Republican FCC would first have to reverse Title II, creating a crisis that a Republican Congress could then “solve” by restoring net neutrality … albeit without Title II. (Credit for this idea, by the way, goes to former FCC chairman Michael Powell, who cleverly suggested it at our annual Media & Communications Summit last May.)

Had legislation trading net neutrality for Title II been proposed before last week’s FCC reversal, it would almost certainly have been viewed as dismantling net neutrality, and would therefore have been painted as anti-consumer. Now, in the wake of the FCC’s draconian draft order, precisely the same legislative language can be recast as “coming to the rescue.” One of the most hackneyed (but true) aphorisms about our democracy is that nothing much ever happens without a crisis. Well, if there isn’t a crisis, you can simply create your own.

To be sure, counting on Congress to do something – anything – is usually a bad bet. Then again, last week's reversal of Title II is so drastic that a conspiracy theorist would argue that it was specifically architected to create a crisis that Congress would feel compelled to address. Almost on cue, Senate Commerce Committee chair John Thune, R-S.D., House Commerce Committee chair Rep. Greg Walden, R-Ore., and House Communications Subcommittee chair Rep. Marsha Blackburn, R-Tenn., all immediately called for “permanent Net Neutrality rules through the legislative process.” When Republicans call for Net Neutrality, it pays to take notice.  More predictably, an army of Democrats also stepped forward to lambaste the FCC draft order. If one squints hard enough, one can almost imagine ... wait for it ... bipartisanship.

To state the obvious, there are a great many hurdles to a legislative fix.  Perhaps most obviously, one can imagine that the Democrats would be hesitant to join in handing the Republicans a rare win on a topic like net neutrality. Let the Republicans “own” the P.R. mess they have just created for themselves. And there will be those who favor letting the current legal proceedings on this matter run their course first. On the other side of the aisle, there are Republicans who don’t view last week’s draft order as overly permissive, and who would be loath to do anything that might be perceived as reintroducing regulatory strictures of any kind. Deregulation is, after all, a key platform tenet.

Still, one just can't help feeling that this is very temporary. These changes will likely be so immensely unpopular that it would be shocking if they are allowed to stand for long.

Nor can they be expected to have much real world impact, even if they do last for a while. One can't imagine there are any broadband providers who would be eager to test the limits of what is now allowable under this regulatory regime, given the enormous risk of popular and/or regulatory or legislative backlash.

For investors, sadly, all this means that there is probably not much to do here. The bottom line is that this is almost certainly not the end of the story.

Craig Moffett has been elected to Institutional Investor Magazine’s All-American Research Team in the U.S. Telecom and/or Cable & Satellite sectors on 15 separate occasions, including nine separate appearance as the No. 1 analyst in America in either U.S. Telecom and/or Cable & Satellite. He has also been rated the No. 1 analyst in the U.S. Telecommunications sector by Bloomberg Markets, and he has consistently ranked No. 1 in Research Quality in Greenwich Research’s annual survey in both Telecommunications and U.S. Cable and Satellite sectors.

Michael Nathanson is a senior research analyst at MoffettNathanson, covering both the media industry and the leading digital advertising companies. For the past decade, Nathanson has been consistently named one of the leading media analysts in the U.S. by Institutional Investor magazine.