Tillerson and Trump wreak havoc at State: It's a right-wing tradition

Rex Tillerson's State Department is melting down, in the final act of a long Republican crusade against diplomacy 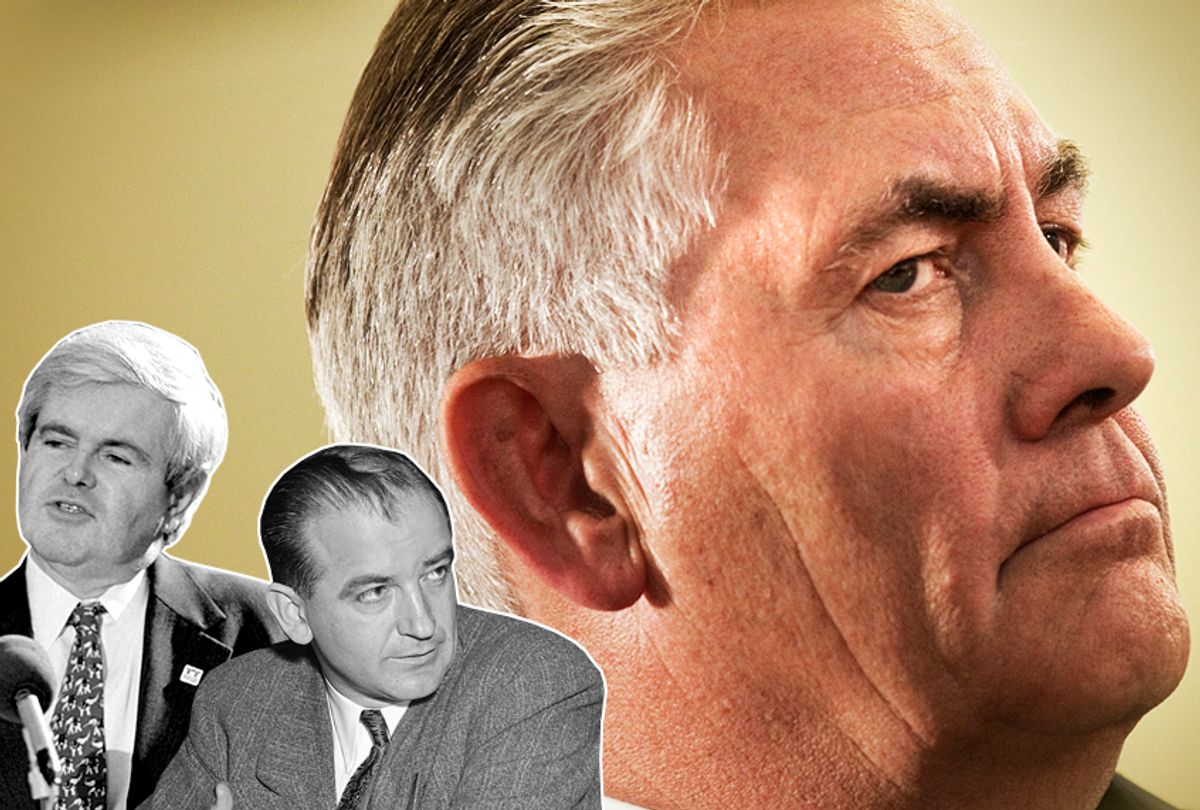 Facebook
Twitter
Reddit
Email
view in app
A number of stories bubbled up over the long holiday weekend, the juiciest being the news that Michael Flynn's lawyers have informed the president's lawyers that they can no longer participate in joint communications, which is taken to mean that Flynn is likely now cooperating with the special counsel in the Russia investigation. This is big news, if true. It could even be a watershed moment if, as suspected, Flynn will be required to offer up a bigger Trump-operation fish than himself. The names "Kushner" and "Trump Jr." are the only ones that come to mind. Stay tuned for more excited speculation through the end of the year.

But the other big story that had social media humming over the four days was this alarming New York Times piece about the apparent dismantling of the Department of State under Rex Tillerson. This has been a recurring theme in the political press for a while, but it seems to have reached critical mass as more and more career diplomats are leaving or being squeezed out while the leadership is largely absent.

First there's the 30 percent proposed cut in the State Department budget which has even some Republican fiscal hawks nervous. Top diplomats, many of whom were initially favorable toward Tillerson on the belief that his business expertise would bring experienced management skills, are in shock at the lack of professionalism and respect for expertise. Both Sen. John McCain, R-Ariz., and Sen. Jeanne Shaheen, D-N.H., along with Democratic members of the House Foreign Relations Committee recently sent letters to Tillerson about “the exodus of more than 100 senior Foreign Service officers from the State Department since January” and what they described as “the intentional hollowing-out of our senior diplomatic ranks.”

The State Department has traditionally had many holdovers from one administration to the other, as knowledge of foreign policy and experience with other nations has generally been valued highly in these positions. Of course, there are also political appointees and a normal degree of turnover when the presidency changes parties. This time is different. Only 10 of the top 44 political positions have been filled, and for most of the rest, no one has even been nominated.

The number of Latinos, African-Americans and women leaving the department are alarming, and there are many important posts in hotspots around the world, including South Korea and the Middle East, that remain unfilled. Even worse, the next generation of possible foreign service employees doesn't want any part of this. According to the Foreign Service Association, "the number of people taking its entrance exam is on track to drop by 50 percent this year."

Meanwhile, Tillerson is making life hell for those who remain. He forced out a number of career professionals for answering questions from UN ambassador Nikki Haley, whom he considers a rival. And President Trump has demanded that Tillerson attend to the important business of releasing every last one of Hillary Clinton's emails, so he ordered the department to respond to more than 2,000 Freedom of Information Act requests, many of which came from right-wing operatives such as Judicial Watch. The Times reports that this has required "midlevel employees and diplomats — including some just returning from high-level or difficult overseas assignments — to spend months performing mind-numbing clerical functions beside unpaid interns."

Finally, all of this is being done in anticipation of what Tillerson promises to be a total reorganization of the department, for which he has hired outside contractors. Considering that Tillerson is largely inaccessible to the current staff and is now planning a major restructuring with no input from anyone with expertise or experience, this should be quite something. Most people in the know are expecting a train-wreck of predictably Trumpian proportions.

If that isn't enough, now we have the soap opera spectacle of Tillerson allegedly "snubbing" Ivanka Trump by not allowing anyone of stature from the State Department to accompany her to India. Vanity Fair reported that an unnamed source said, "Rex doesn’t like the fact that he’s supposed to be our nation’s top diplomat, and Jared and now Ivanka have stepped all over Rex Tillerson for a long time.”

So, all the hand wringing over the weekend was understandable. This does seem to be a very reckless course and nobody really understands what's going through Tillerson's mind. But this is actually nothing new. Hostility toward the State Department has been a feature of right-wing politics since 1950 when Joseph McCarthy launched his career by pulling a piece of paper from his pocket, during an appearance in Wheeling, West Virginia, that he claimed had the names of 205 Communists who had infiltrated the department. The entire concept of U.S. "soft power" has been seen ever since as a suspicious form of left-wing appeasement that needed to be reined in if not totally eradicated.

Former Speaker of the House Newt Gingrich always had a particularly hostile attitude toward the State Department. As recently as 2003, he even took on Secretary Colin Powell, at a time when the Bush administration was riding high with 80 percent approval ratings. He claimed it was a bloated, old-fashioned bureaucracy unsuited to the challenges of the modern world, which Gingrich believed were all about clandestine warfare and high-tech battlefield communications. He gave a speech in which he took on the mantle of the neoconservative "Pax Americana" that was in vogue at the time, with all the requisite flowery paeans to American values. It was obvious he was pressing for a big pivot from the soft power of diplomacy to the hard power of "spreading democracy" down the barrel of a gun. It was widely assumed that Gingrich was working on behalf of Donald Rumsfeld's Pentagon at the time.

That's what these right-wing critiques of the State Department always come down to. They think "soft power" is weak. They believe in hard power, military power. In that regard, Donald Trump is a true blue Republican, deep in his bones. It's unclear whether Rex Tillerson believes that too or is just another unfit Trump appointee blundering recklessly into disaster. It doesn't really matter what the motives are. The administration is turning the U.S. into a superpower without competence or moral authority. That makes us a danger to everyone, including ourselves.