Judge rules that the military must allow trans people to enlist, a new low for Trump's flagging ban

Is the transgender military ban dead in the water? 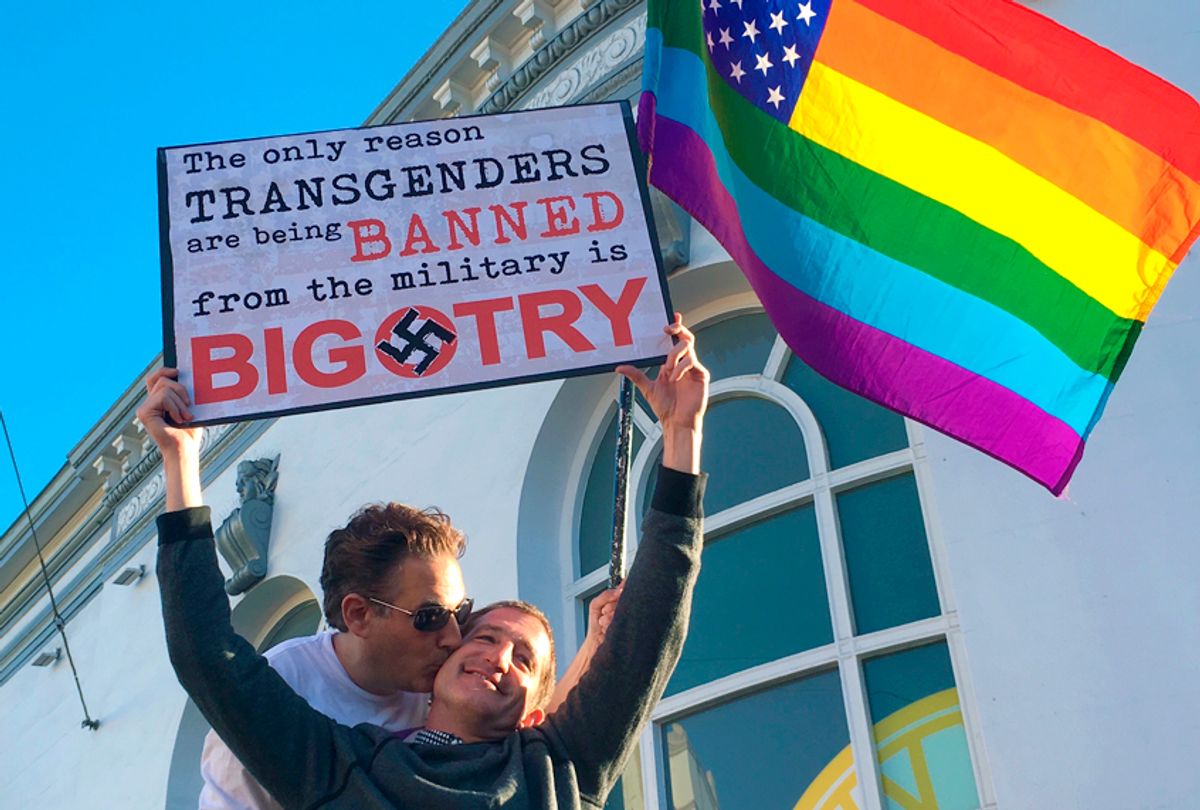 A federal judge ruled Monday that the military and government must allow transgender people to enlist starting on January 1, 2018.

The statement from Washington, D.C. District Court Judge Colleen Kollar-Kotelly is a clarification of a preliminary injunction she issued last month against President Donald Trump's proposed military ban of openly transgender soldiers and recruits. After the October ruling, the government requested the ability to push back the January 1 enlistment date.

Thanks to a policy developed under President Barack Obama's administration, the military was supposed to begin enlisting out transgender service people starting July 1, 2017. On June 30, however, Defense Secretary James Mattis announced that he was postponing the date until January 1, 2018.

It was also in July that Trump declared  — apparently much to the surprise of legislators and the Pentagon — an indefinite and sweeping trans military ban via Twitter.

"After consultation with my Generals and military experts," he wrote at the time, "please be advised that the United States Government will not accept or allow . . .  Transgender individuals to serve in any capacity in the U.S. Military." He added, "Our military must be focused on decisive and overwhelming . . . victory and cannot be burdened with the tremendous medical costs and disruption that transgender in the military would entail."

After consultation with my Generals and military experts, please be advised that the United States Government will not accept or allow......

....Transgender individuals to serve in any capacity in the U.S. Military. Our military must be focused on decisive and overwhelming.....

....victory and cannot be burdened with the tremendous medical costs and disruption that transgender in the military would entail. Thank you — Donald J. Trump (@realDonaldTrump) July 26, 2017

After this announcement, Trump ordered the Defense Department to implement the ban within six months, in a memo, and to determine "how to address" the transgender people who were already members of the military. Many from both sides of the Congressional aisle were, and remain, outraged by his decision to prevent trans individuals from enlisting and remove active trans service members from their positions. Some opponents found Trump's claim that transgender service members burdened the armed forces with "tremendous medical costs and disruption," not only offensive, but spurious.

As Salon's Matthew Rozsa reported in October, "critics noted that the estimated medical cost of transgender reassignment surgery is much less than the amount that the military spends on matters like erectile dysfunction medicine — and would cost up to 100 times less than the expense of kicking transgender individuals out of the military."

Moreover, there seems to be little actual support for Trump's measure at the higher branches of the services. Even the chairman of the Joint Chiefs of Staff, Marine Corps Gen. Joseph F. Dunford Jr., told the Senate Armed Services Committee in September,  “I believe any individual who meets the physical and mental standards, and is worldwide deployable and is currently serving, should be afforded the opportunity to continue to serve.” He expressed that he and other top brass had shared their opinions with the president.

As with so much President Trump has attempted in his short term in office, the rollout of the ban seems ever more doomed by the certain brand of organizational incompetence, lack of legal acumen, surfeit of haste and public opprobrium that has tanked so many of his other attempts to enact radical policies. However, even the clarification that, yes, trans people can still sign up for service may not be the end of this embarrassing chapter in executive wrangling. In October, the Department of Justice, headed by the virulently conservative Attorney General Jeff Sessions, said it would appeal the injunction.