Mueller homes in on Michael Flynn: How much did Trump know?

Trump's former national security adviser was previously one of America's top military spies. Just how dirty is he? 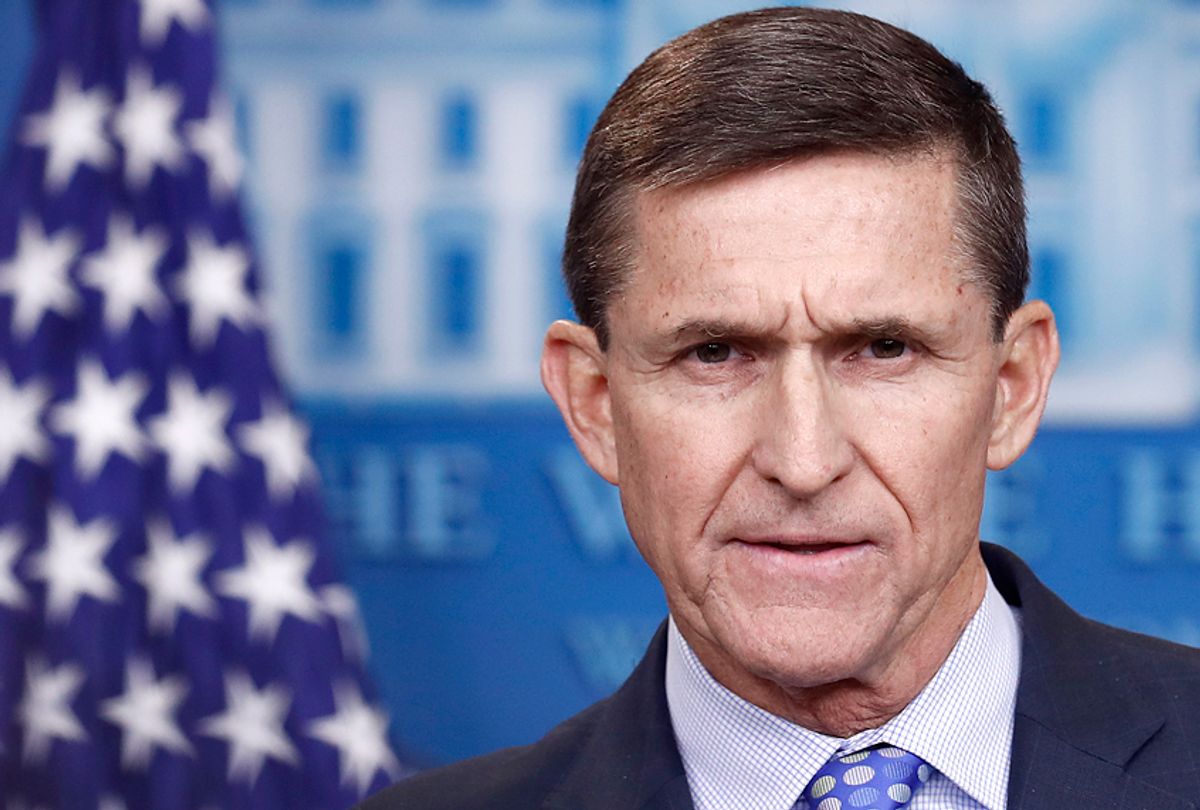 So we're off to the races this week. President Trump has hit a new low, perhaps, by slurring a Native American heroine in a speech to Native American war heroes while standing under a portrait of Andrew Jackson. Meanwhile, the Consumer Financial Protection Bureau finds itself at war with the White House, with two different people serving as its chief and lawsuits flying in all directions.

James O'Keefe apparently tried to sting top investigative journalists of The Washington Post and failed spectacularly. Trump called CNN International fake news right after Russian President Vladimir Putin officially declared it a propaganda network. There's also a massive tax cut bill that Trump and his wealthy buddies yearn to put in their heirs' Christmas stockings this year, grinding its way through the Senate. And it's only Tuesday.

But one story buzzing over the weekend may end up being a watershed moment in this crazy Trump era and that is the news that Michael Flynn's lawyers sent notice to the White House that they were withdrawing from an agreement to share information. Such an arrangement is not uncommon between lawyers for people involved in an investigation, but when one of their clients decides to cooperate with prosecutors it is unethical to continue to share or receive information from others who may be targets of those prosecutors.

So the assumption is that Flynn is cooperating with special counsel Robert Mueller and may be negotiating a plea agreement. On Monday, ABC News reported that Flynn's attorney Robert Kelner met with members of Mueller’s team, which suggests that speculation may very well be correct.

Flynn was fired as Trump's national security adviser (a post he held for barely three weeks), ostensibly because he lied to Vice President Mike Pence, a story that never really made sense. It's not as if the Trump White House has some kind of zero tolerance for lying. What we know happened at the time was that the FBI had already questioned Flynn about his discussions with the Russian ambassador. We also know that Acting Attorney General Sally Yates (fired shortly thereafter for her refusal to carry out the unlawful Muslim ban) told White House counsel Don McGahn that Flynn might be compromised, and that McGahn told the president -- but they kept him around for another two weeks.

It's unclear what went on during that period, but Mueller and company are surely very curious as to what Trump and others were thinking. After all, the conversation Flynn allegedly had with the Russian ambassador involved Flynn saying the Russians shouldn't worry about the Obama administration's sanctions over interference in the election. We just don't know if that was payment for delivery or just a gesture of goodwill between close friends.

Flynn is exposed on a number of fronts that make him very vulnerable to prosecution. He failed to file as a foreign agent, one of the charges the special counsel's office filed against former Trump campaign chair Paul Manafort. He's also possibly being investigated for his lobbying work on behalf of foreign countries, money laundering and lying to federal agents about his overseas contacts. And then there is that little matter that Flynn and his son may have been involved in a plot to kidnap exiled Turkish cleric Fethullah Gülen, a rival of Turkish President Recep Tayyip Erdogan, and render him to Turkey in exchange for millions of dollars -- while Flynn was working for Trump.

On Monday, The Washington Post reported that Mueller was also looking into Flynn's consulting deal with a company called ACU to build nuclear reactors all over the Middle East, a project that continued through the end of 2016 and that Flynn failed to reveal on his initial disclosure forms. The Post described the project this way:

The idea: to build several dozen “proliferation-proof” nuclear power plants across Persian Gulf states. The plan relied heavily on Russian interests, which would help build the plants, as well as possibly take possession of spent fuel that could be used to build a nuclear weapon, according to people familiar with the project. ACU’s managing director, Alex Copson, had been promoting variations of building nuclear facilities with Russian help for more than two decades, according to news reports.

Oddly, Flynn was warning publicly, including in testimony to Congress in 2015, that the U.S. would be at risk if Russia were to build these nuclear reactors. One imagines that the special counsel would be quite interested in knowing just what he was up to, since he was simultaneously consulting with a company that was working with the Russians to do just that.

These are just some of the possible areas of interest that are public knowledge. There could be be more. People tend to forget what Gen. Michael Flynn did before he became Trump's closest national security adviser. He's not like the rest of Trump's motley entourage of family, has-beens and obscure misfits. Up until 2014, when he was finally fired by President Obama, Michael Flynn was one of the most important intelligence officers in the U.S. military.

After 9/11 Flynn held progressively higher levels of intelligence posts until he finally became director of the Defense Intelligence Agency and commander of the Joint Functional Component Command for Intelligence, Surveillance and Reconnaissance, and then chair of the Military Intelligence Board in 2012. He lasted until 2014, when he was forced out for bad management and personality issues.

This is not your usual campaign operative or government bureaucrat. Flynn knows things. Until three years ago, he was privy to the most tightly held secrets America has, and was right back in it earlier this year as national security adviser to the president. He had a lot to offer to a foreign government if he was of a mind to share it, whether for money, revenge or something else.

Michael Flynn could be in very big trouble. The question now is whether his boss knew what he was up to or promised to protect him once he was caught. That's what Mueller is looking to find out.