Trump's top talk radio host has a dangerous and murky side 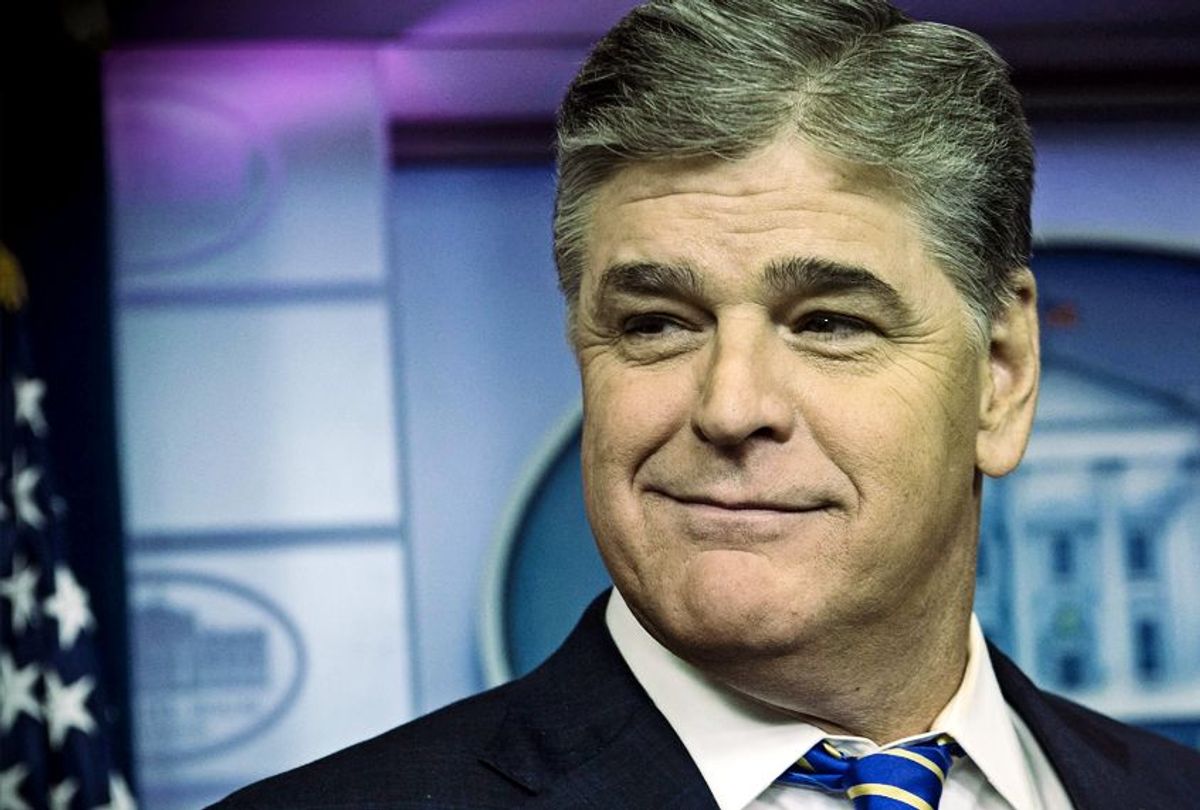 Toward the end of his 8,000-word New York Times Magazine profile of Sean Hannity — after touching on image-softening tidbits like how the Fox News host and talk radio host who was once fired for homophobic vitriol says he now has “gay friends” and the revelation that Hannity may have come to believe some of the women who say they were sexually harassed by Roger Ailes after trashing them publicly — contributing writer Matthew Shaer considered the question of whether it’s possible the conservative media megastar and close adviser to President Donald Trump is actually a paranoid conspiracy theorist.

“The problem for Fox News,” Shaer wrote, “is that while Hannity has risen to become the top ratings-earner of the nightly lineup, he is also a figure prone to barreling headfirst into the murky territory between opinion and out-and-out conspiracy theorism.” After highlighting a Vox.com study that found Hannity to be the “media’s top conspiracy theorist” and quoting Hannity rejecting that finding, Shaer appeared to agree with the host.

“[T]o watch Hannity regularly is to observe how distant the host is from a figure like the Infowars proprietor Alex Jones,” Shaer concluded. “Jones endorses theories; Hannity almost never does, leaving that job to his guests. It is a dance that has the effect of nourishing the more wild-eyed beliefs of his fans while providing Hannity a degree of plausible deniability.”

This is not a conclusion that can survive the slightest scrutiny from a regular observer of Hannity’s work. In fact, it is belied by the profile, which depicted Hannity promoting at least three conspiracy theories: that President Barack Obama needed to release his birth certificate to prove he was born in the United States, that Hillary Clinton pushed through the purchase of a uranium mining company by Russia in exchange for donations to the Clinton Foundation, and that a murdered Democratic National Committee staffer may have been killedbecause he supposedly gave the group’s emails to WikiLeaks. Those are only a handful of the numerous conspiracies and hoaxes Hannity has pushed on his radio and television programs over the years.

In fact, Hannity’s entire oeuvre for much of the Trump presidency has been built around a massive, all-encompassing conspiracy theory: That a “Destroy Trump Alliance” composed of the press, the “deep state,” and critics from both major political parties have united in a coordinated effort to remove the president from office based on what the Fox host deems a “black-helicopter, tinfoil-hat conspiracy theories about so-called Trump-Russia collusion.” Hannity has detailed this theory in dozens of shows, warning against the depredations of the “deep state” and the “deeply corrupt” investigation by special counsel Robert Mueller.

On one occasion, Hannity described the nefarious plot as a “soft coup” which he claimed constitutes a “clear and present danger.” If that sounds to you like Hannity endorsing a conspiracy theory, you aren’t alone; The Washington Post’s Erik Wemple described Hannity’s “soft coup” claim as the Fox host “encroaching on Alex Jones territory.”

Hannity’s conspiracy theory has several key benefits: It allows Hannity to delegitimize any possible sources of negative information about the Trump administration by tying them into the plot; it encourages his viewers to stick with the president because he is beset by such malicious foes; and, perhaps most importantly, it allows Hannity to shift attention from the possible malfeasance Mueller may discover in his investigation to the question of whether Mueller himself is a criminal running an illegitimate probe who must step down or be fired  , as the Fox host has demanded dozens of times.

The Times appears to have missed all this. Indeed, for someone claiming to be steeped in Hannity’s work, Shaer appears to have largely ignored Hannity’s discussion of the Russia investigation, perhaps the most important story of the year. The profile does not mention Mueller at all, and references Russia only a handful of times. A few of the dots are there — the Times writer mentions, for instance, that Hannity’s Seth Rich theory was intended to undermine the case for Russia’s role in hacking the DNC to bolster Trump, and that Hannity views the Uranium One conspiracy as a way to “boomerang” the Russia investigation on Democrats — he just doesn’t quite pull them together. And given how wild Hannity’s claims have become — and the potential results they might have if his most powerful fan were to act on him — that’s a big miss.

Take last night’s edition of "Hannity." Monday morning, ABC News reported that the lawyer for Michael Flynn, who served as Trump’s national security adviser until he was forced from office following revelations about his conversations with Russian officials, had met with members of Mueller’s team, potentially to discuss a plea deal which might include Flynn testifying against the president or top White House aides. Mueller reportedly has amassed enough evidence to charge Flynn with federal crimes, and Flynn’s role in several key interactionsinvolving Trump associates and Russia could make him an invaluable witness.

But if you were one of the 3-million-plus viewers to turn in to Hannity’s show last night — perhaps including the president — you saw him assemble a case aimed at encouraging the audience to disbelieve anything Flynn might say following a plea deal, and instead direct their fire at Mueller’s team. Or, as Fox judicial analyst Gregg Jarrett, a Hannity regular, described them, a “cartel, the equivalent of the Mob” composed of former FBI director James Comey, Mueller, and his team, an “illegal syndicate that’s acting under the guise of the law.” Contra Shaer, Hannity did not just stand by while his guests push conspiracy theories about how Mueller might suborn perjury from Flynn against Trump, he actively participated in constructing them:

Sean Hannity: How could this happen in the United States of America, Gregg? This is not a banana republic here.

Gregg Jarrett: Because the Department of Justice, and particularly the FBI and Comey and Mueller at the FBI, have turned into this renegade rogue deep state that operates under their own rules.

Jarrett: Yes. And what I worry about are ruthless prosecutors who suborn perjury. What they do is they make promises and threats to defendants. You’re gonna spend 10 years behind bars unless you sign this statement and the witness says, “but that's a lie,” and the prosecutor doesn't seem to care.

Hannity: Or I’m gonna go after your son.

Jarrett: It's extortion. It's bribery. When they do it it's legal. When you and I do it it's illegal. It's got to stop.

That’s the message going out to Hannity's millions of viewers, perhaps including the president: Trump is being persecuted by an illegal cartel that will do anything and lie to anyone to force the innocent Trump from office. The only plausible deniability Hannity has is that which people like Shaer are willing to grant to him.

As for how different Hannity’s show is from Jones’, the nation’s leading 9-11 truther has weighed in on the subject. “Sean Hannity is currently the main leader of the resistance against the globalists outside of Trump and then of course myself,” Jones declared in June. “'The Sean Hannity Show,'" he added in August, “is now 'The Alex Jones Show.'”