The Trump administration made one big claim, but doesn't have the facts to back it up 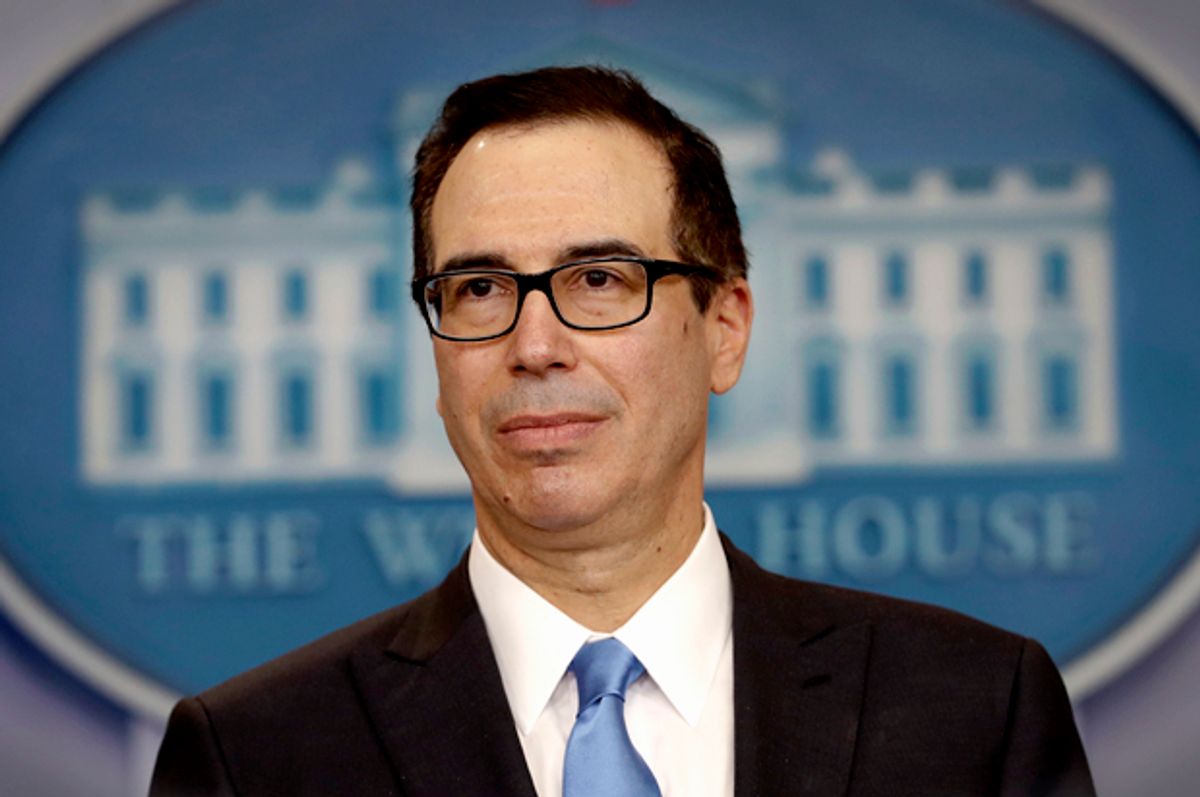 The Republicans' deeply unpopular tax plan overhaul will be heading to the Senate floor very soon, and despite repeated pledges from President Donald Trump's administration, they have still not yet released an analysis detailing how the plan intends to pay for itself through anticipated economic growth.

When the $1.5 trillion tax cuts were first pitched, Treasury Secretary Steven Mnuchin assured the public that his staffers were "working around the clock on running scenarios for us," but with the legislation expected to hit the Senate floor imminently, no such analysis exists, The New York Times reported.

Further, those from within the Treasury’s Office of Tax Policy have actually claimed to have been "largely shut out of the process and are not working on the type of detailed analysis that he [Mnuchin] has mentioned."

Instead of conducting full analyses of tax proposals, staff members have been running numbers on individual provisions or policy ideas, like lowering the tax rate on so-called pass-through businesses and figuring out how many family farms would benefit from the repeal of the estate tax. Activity has picked up more recently as Treasury has sought to provide technical assistance to the Joint Committee on Taxation and the Congressional Budget Office for their estimates.

It's a common trend for the Trump administration, or Trump himself, to staunchly defend its proposed agenda, but fail to deliver supporting evidence in the end. Trump has repeatedly labeled plans as being just two weeks away, but has missed that deadline numerous times on several issues.

But "just trust us" strategy aside, the Trump administration hasn't been able to back up its tax plan with any actual evidence it will be effective for all Americans. Meanwhile, Senate Democrats have taken notice of the secretive approach Republicans have used.

"This administration’s top salesmen spent months trying to con the American people into buying false claims about their tax plan," Sen. Ron Wyden, D-Ore., said, according to the Times. "Treasury has broken this promise intentionally and know the truth would sink this scam once and for all. They’re doing everything they can to cover up Republicans’ middle-class tax hike."

The Trump administration has utterly failed to properly defend its party's own tax plan, and the promises that it would provide evidence of how adding $1.5 trillion to the deficit will be paid for have simply not been kept that's evidently been intentional. It's a dangerous trend the White House has consistently followed.

Perhaps the most egregiously failed promise comes directly from the mouth of Trump, who campaigned on being a candidate that championed working class Americans and promised to soothe economic anxiety and shake up the Washington establishment.

With former Goldman Sachs executives having designed a major overhaul of the tax code, and several economists having predicted it will run up the debt, it's quite clear that this bill stands to disproportionately benefit the wealthy, while shifting the burden upon other Americans.