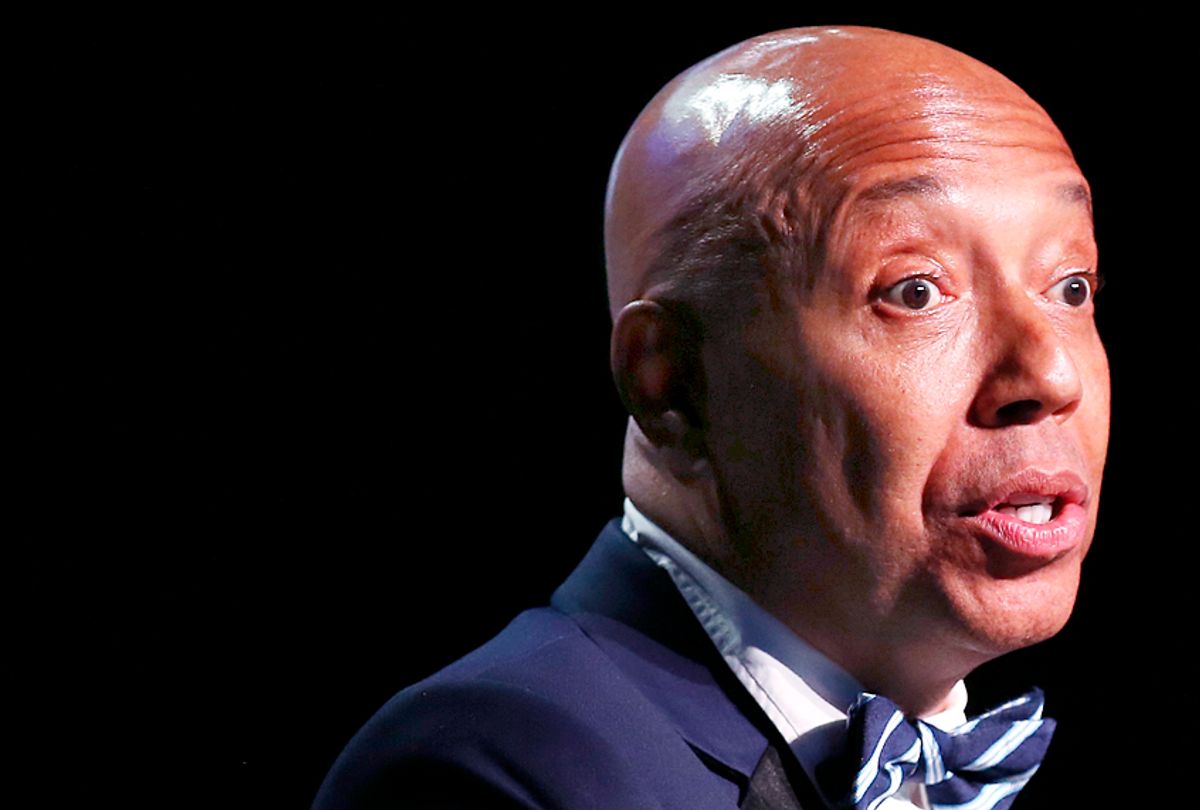 Def Jam Recordings co-founder Russell Simmons announced his departure from a number of his companies Thursday after screenwriter Jenny Lumet accused him of sexually assaulting her in an editorial.

Lumet, a screenwriter behind "Rachel Getting Married" and "The Mummy" and the daughter of filmmaker of Sidney Lumet, detailed the alleged 1991 rape in a column in the Hollywood Reporter. She said her and Simmons frequented many of the same events and had numerous mutual friends, and were friendly leading up to the alleged assault. Lumet claimed Simmons pursued her "lightly, on and off, over a course of years," but "it wasn't deep, as far as I knew."

Lumet wrote that when she was 24 and out at a restaurant, Simmons, then 34, offered to give her a lift home in his limousine. She claims that when she got into the car and tried to give the driver her address, Simmons said "no," twice. The driver then took the two to Simmons' apartment. "I felt dread and disorientation," Lumet wrote. "I wanted to go home. I said I wanted to go home. I didn’t recognize the man next to me."

She said she was shuffled into his apartment and into his bedroom. "I said 'Wait.' You said nothing," Lumet said. "I made the trade in my mind. I thought 'just keep him calm and you’ll get home.'" Then, Lumet said, Simmons raped her

When it was over, she claims she quickly got her clothes and went home. "I never told anyone this story until October 27th of this year (after the Harvey Weinstein story was in the news, but weeks before the first public claims were made against you), when I told a girlfriend from childhood," she said. "I don’t recall ever meeting any of the women who have spoken out against you, Russell. But I can’t leave those women twisting in the wind. Maybe the recalling of this incident can be helpful. I don’t know if it can."

This was the second time Simmons has been publicly accused of sexual assault. Last week, the Los Angeles Times reported that model Keri Claussen Khalighi said Simmons forced her to perform oral sex while director Brett Ratner watched, allegations which Simmons has denied. Ratner has also been accused by multiple women of sexual misconduct.

After Lumet's account, Simmons released his own statement, saying he learned of her claims with "great anguish." "While her memory of that evening is very different from mine, it is now clear to me that her feelings of fear and intimidation are real," Simmons wrote. "While I have never been violent, I have been thoughtless and insensitive in some of my relationships over many decades and I sincerely apologize."

"This is a time of great transition," he continued. "The voices of the voiceless, those who have been hurt or shamed, deserve and need to be heard."

Simmons said he doesn't want to be a distraction and so he's decided to remove "myself from the businesses that I founded. The companies will now be run by a new and diverse generation of extraordinary executives who are moving the culture and consciousness forward. I will convert the studio for yogic science into a not-for-profit center of learning and healing."

"As for me, I will step aside and commit myself to continuing my personal growth, spiritual learning and above all to listening," his statement concluded.

The announcement brings an ignominious and disturbing end to what has been a highly influential career. Russell Simmons co-founded Def Jam Recordings with Rick Rubin in his NYU dorm room in 1984. Since then, the label has been home to some of the biggest hip-hop artists in the genre's history. When Simmons said Def Jam helped give "rap such a stable footprint in culture," he was not overstating the case.

Given the tenor of today's news cycle, it's perhaps not inappropriate to wonder which other similarly influential industry executives may soon be in the spotlight for similar allegations.