Trump's tweets seem to be damaging his relationship with U.S. allies

Sadiq Khan and several British politicians call for Trump's official visit to the U.K. to be canceled entirely 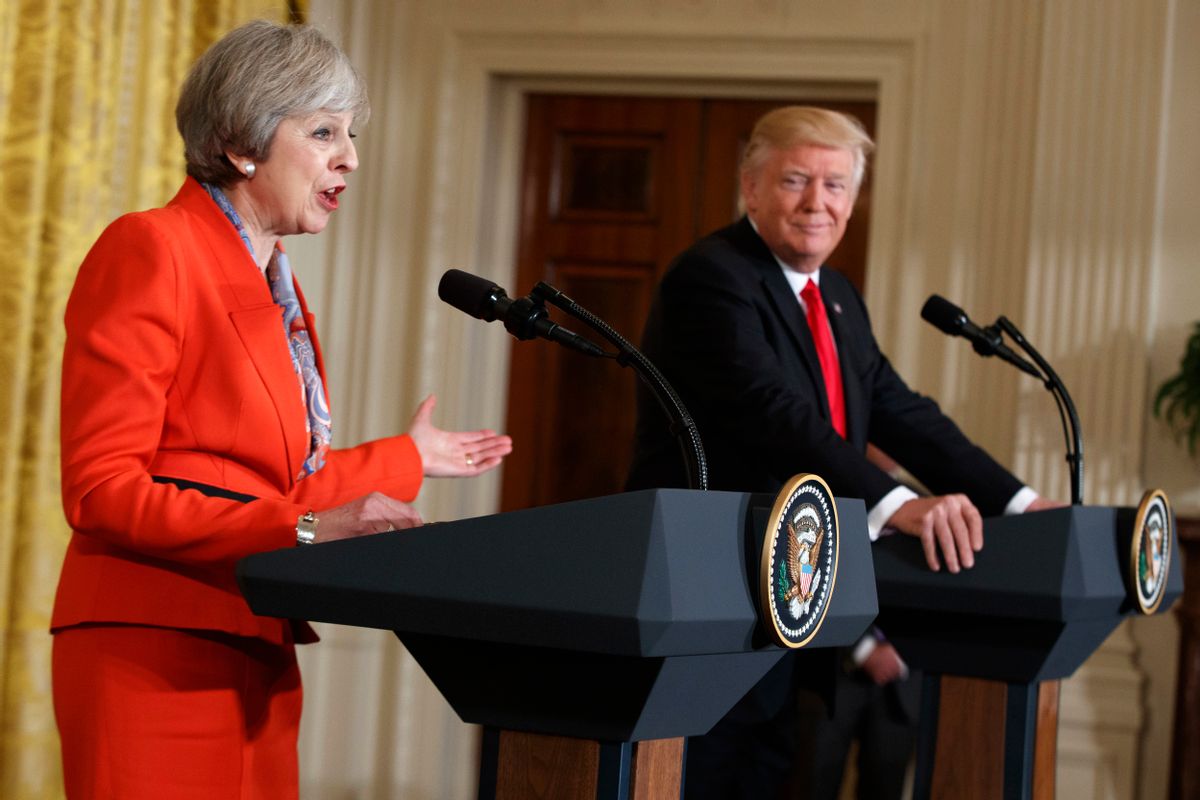 After U.K. Prime Minister Theresa May said it was "wrong" for President Donald Trump to retweet three misleading and provocative Islamophobic videos on Wednesday, in a rare public rebuke of a staunch ally he told her not to focus on him and that the U.S. is "doing just fine."

".@Theresa_May don’t focus on me, focus on the destructive Radical Islamic Terrorism that is taking place within the United Kingdom. We are doing just fine!" Trump tweeted Wednesday night.

.@Theresa_May, don’t focus on me, focus on the destructive Radical Islamic Terrorism that is taking place within the United Kingdom. We are doing just fine!

Earlier on Wednesday, May said it was "wrong for the president to have done this," in reference to the anti-Muslim videos he retweeted.

At least one of the videos in question was entirely false, and Fransen wrote a caption along with it that depicted a Muslim migrant engaging in violence. But the video was months old, and neither person in the video is a migrant, or a Muslim. Trump received widespread condemnation for his actions, and some are worried about the potential backlash the president's comments can have on the nation's relationship with the U.K.

On Thursday, May responded to Trump, saying that Trump's retweets were "wrong."

London Mayor Sadiq Khan, who Trump attacked on Twitter in the immediate aftermath of a London terror attack earlier this year, reiterated his claim that "any official visit at all from President Trump to Britain would not be welcomed."

"President Trump yesterday used Twitter to promote a vile, extremist group that exists solely to sow division and hatred in our country," Khan said in a statement. "Many Brits who love America and Americans will see this as a betrayal of the special relationship between our two countries. It beggars belief that the president of our closest ally doesn't see that his support of this extremist group actively undermines the values of tolerance and diversity that makes Britain so great."

The statement continued, "As the Mayor of this great diverse city, I have previously called on Theresa May to cancel her ill-judged offer of a state visit to President Trump. After this latest incident, it is increasingly clear that any official visit at all from President Trump to Britain would not be welcomed. "

Khan also said Trump should delete his tweets and apologize to the British people. But Khan is far from the only U.K. politician that said Trump must suffer the consequences of his actions. U.K. Home Secretary Amber Rudd, said, "President Donald Trump was wrong to retweet videos posted by the far-right group Britain First." She said the tweets were "full of hate" and were "wholly unwelcome."

I hope our Government will condemn far-right retweets by Donald Trump. They are abhorrent, dangerous and a threat to our society.

But don't expect Trump to stop airing his grievances with other countries over Twitter any time in the future. On Thursday, he once again blamed China for the ongoing escalation of tensions on the Korean Peninsula. The tensions have run high as of late, as Trump has repeatedly sought to provoke North Korean leader Kim Jong-un.

The Chinese Envoy, who just returned from North Korea, seems to have had no impact on Little Rocket Man. Hard to believe his people, and the military, put up with living in such horrible conditions. Russia and China condemned the launch. — Donald J. Trump (@realDonaldTrump) November 30, 2017