Conservatives are seething about the verdict in the Kate Steinle case 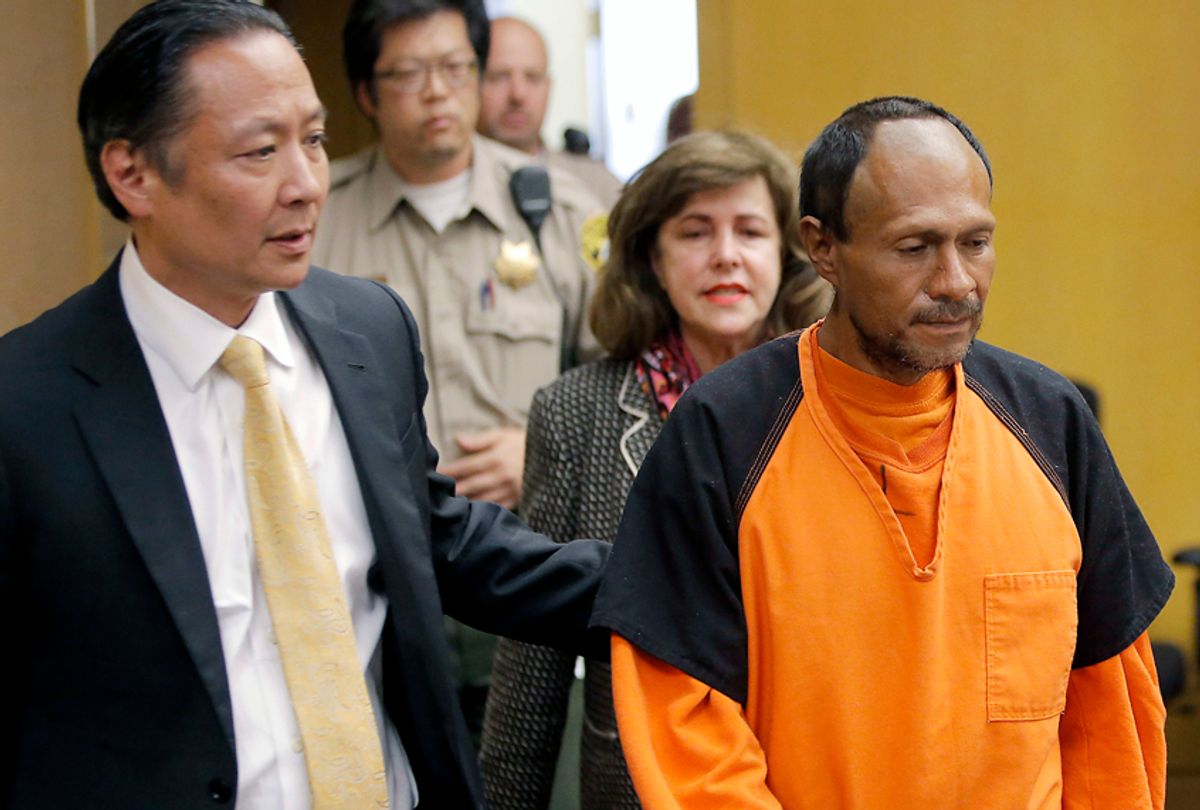 An undocumented immigrant who shot and killed a young woman in 2015 on a San Francisco pier was acquitted of homicide charges. It could be proof that the justice system is imperfect, and guilty people sometimes go free. But that's not how conservatives are seeing the verdict.

Kate Steinle was shot in the back by Jose Ines Garcia Zarate while walking with her father on the pier. The trial itself focused extensively on the testimony of ballistics experts. Prosecutors argued that Zarate had deliberately shot Steinle; the defense claimed her death was a freak accident. The jury ultimately sided with the defense, finding Zarate guilty of being a felon in possession of a firearm but deciding that he had not intentionally taken Steinle's life. An important fact, per NBC, was, "The bullet that felled Steinle ricocheted off the pier's concrete walkway before it struck her."

Zarate was in the custody of the local sheriff's department prior to the shooting. He had completed a federal sentence for illegal re-entering the United States and been transferred to a San Francisco jail in March 2015 on a charge of selling marijuana. That marijuana charge was subsequently dropped, however, and the sheriff's office released him even though federal immigration authorities wanted to keep Zarate so that he could be deported.

After the verdict was announced, Trump used it in a Twitter rant to promote his wall-building and anti-immigrant agenda, as well as take swipes at Democratic leaders.

Trump was incorrect when claiming that Zarate had been "exonerated." Zarate may even wind up serving time in jail; since the crime for which he was convicted carries with it a sentence of 16 months, two years or three years, he could be incarcerated once the two years he already served for his previous offense is credited to him.

Despite San Francisco's status as a sanctuary city, Garcia will be deported, because its policy is to turn over undocumented immigrants if the federal government has a warrant for their arrest.

Notably, this observation came from Sarah Rumpf of Red State, who despite the website's right-leaning perspective argued, "The main issue is that the defense was able to present a credible case that the shooting was an accident, and the prosecution aggressively overplayed their hand. Add in a misguided police interrogation strategy and you have reasonable doubt."

These facts did not stop Trump's attorney general, Jeff Sessions, from using the case's verdict to push for his long-time goal of harsher anti-immigrant policies.

"When jurisdictions choose to return criminal aliens to the streets rather than turning them over to federal immigration authorities, they put the public's safety at risk. San Francisco's decision to protect criminal aliens led to the preventable and heartbreaking death of Kate Steinle," Sessions wrote in a statement after the announcement of the verdict.