On "Fox & Friends," a guest accused the quarterback of funding violent extremism 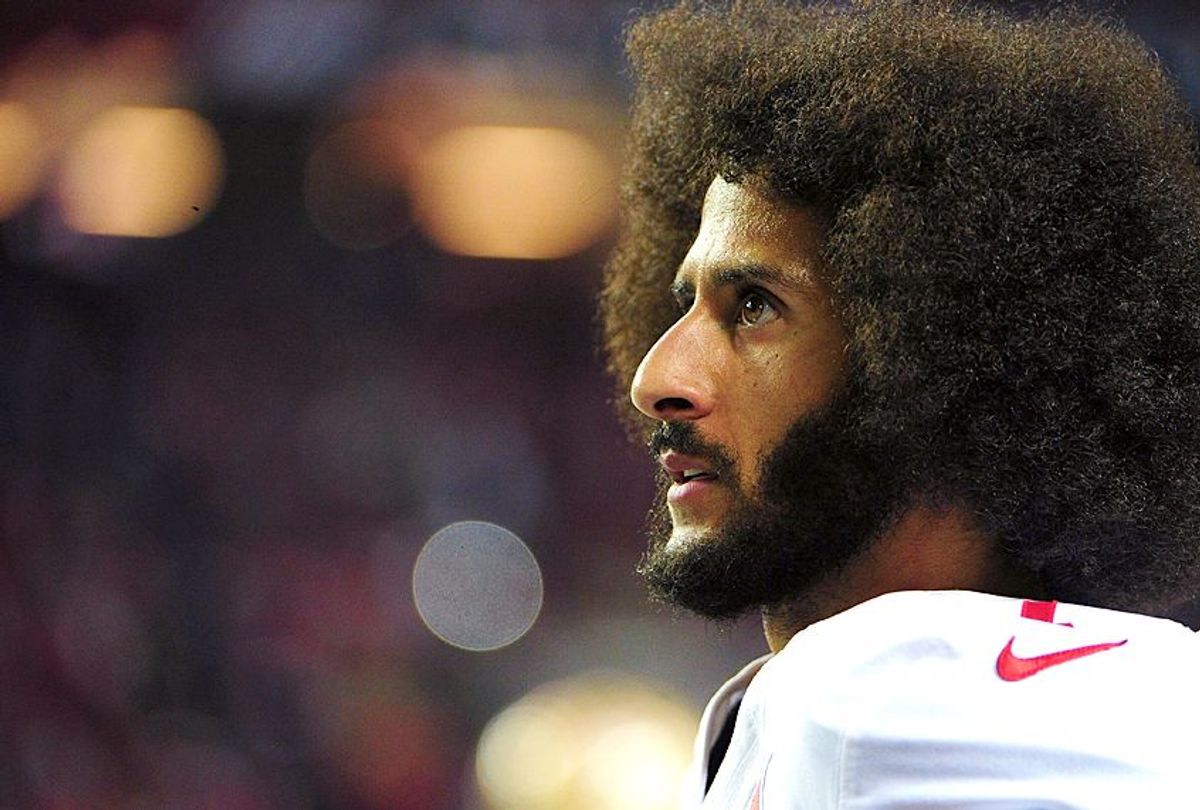 Ousted quarterback Colin Kaepernick was awarded the 2017 Sports Illustrated Muhammad Ali Legacy Award Thursday for his commitment to social justice. In response, "Fox & Friends" bristled at the comparison between the two sportsmen.

"Look, Kaepernick is no Ali," he continued. "And the idea that the left continue to want to sell this lie to America, that this man stands for something that supposedly is happening in this country that's not, just shows you that the left will never give up on this narrative."

Co-host Brian Kilmeade responded, "Well, let's talk about the differences. Muhammad Ali gets told you better get drafted — you are drafted, go. And he says I'm not. It's against my religious beliefs, I won't do it, so he is out. They strip him of his heavyweight title, which is bizarre in retrospect. And for three and a half years, he has absolutely no money," he added.

"Colin Kaepernick has already made a zillion dollars where there wasn't that much money in sports back then anyway," he continued. "And then he walked away from that contract in 2016. He would have been still on that roster. They would have had to cut him or he would have had payout."

To assert that Kaepernick walked away from the San Francisco 49ers purely of his own volition is disingenuous. General manager John Lynch said that Kaepernick would have been released from the team had he not elected to opt out, ESPN reported.

Regardless of that fact, Jackson continued, "You are exactly right. So Colin Kaepernick chose his own fate and there are many other bad comparisons."

Jackson then took the conversation in a different direction. "Colin Kaepernick gives money to terrorists. So look at the people he has donated money to, these are radicals in many cases. Very anti-American, ethno-centrically racist black organizations."

Before Kaepernick left the league, he pledged to donate $1 million over a year as well as the revenue from all his jersey sales from 2016 to various organizations that support oppressed communities.

Over this period, Kaepernick has earmarked money for a charter school in Harlem, the Coalition for the Homeless, summer camp for Baltimore high-school students, an organization that helps families who are victims of violent crimes, Meals on Wheels, Somalia famine relief, assistance for black veterans, the Center for Reproductive Rights, and many, many other social justice and civil rights organizations. It is unclear which of these organizations and causes above Jackson considers to be terrorist-affiliated.

It's also notable that Jackson may be referring to the non-violent Black Lives Matter movement, which has strong ties to Kaepernick. It is not a terrorist organization and, indeed, it is unclear if there is any major, considerable African-American terrorist group operating in the United States in 2017 (though it is interesting how often the conservative movement elides the fight for equality with terrorism).

"Muhammad Ali got a raw deal. Colin Kaepernick did not get a raw deal," Jackson concluded.

It's been demonstrated over and over again that conservatives will only celebrate black protests long after they've been processed and mainstreamed, when they've ceased to be considered a direct threat. At the time of his stand against the supremacy, Muhammad Ali was vilified, perhaps even more than Kaepernick is being now. Generations later, even Fox News can't deny Ali is an American hero. Will Kaepernick get the same treatment?