Fox News wants to find the real criminal here, and it's not Michael Flynn

After ignoring Flynn's arrest, FNC decides it's proof that Obama needs to be investigated 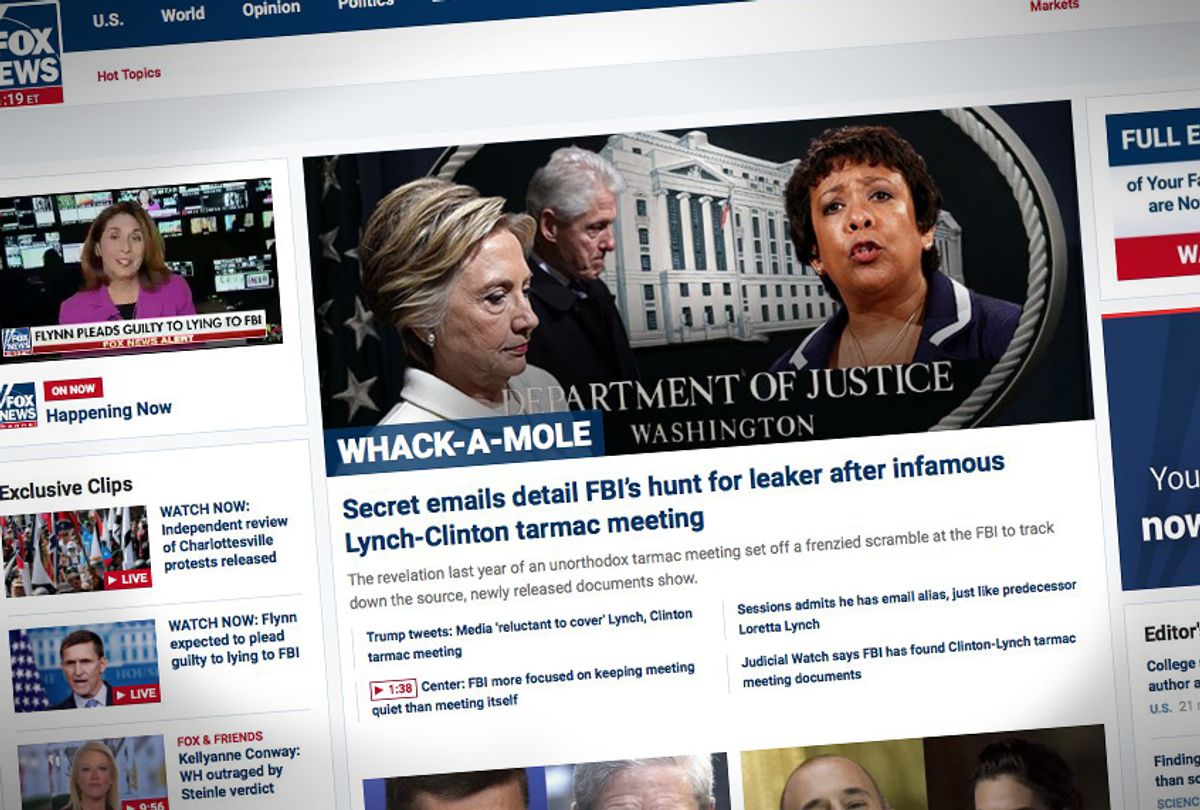 As federal prosecutors announced a plea deal with former White House National Security Adviser Michael Flynn, Fox News had a unique spin on the significant development in the investigation into the Trump campaign's communications with Russia.

Though the story broke shortly before 10 a.m. Eastern Time, the right-leaning news network did not feature it as the lead story on its web page. Instead, FoxNews.com readers were treated to a story about the FBI's separate investigation into internal leaks about Hillary Clinton, the former Democratic presidential candidate who has retired from politics and public service.

Once Fox did get around to covering the news, it framed Flynn's guilty plea in terms of a tangentially related FBI investigation taking place — who leaked classified information to the media about calls that Flynn had engaged in with Russian government officials.

Sure, the act may have been a crime, but it has no bearing on Flynn's very public plea agreement with special prosecutor Robert Mueller. Fox anchor Bill Hemmer seemed to conclude that it was the former Barack Obama administration that was likely to be most negatively impacted by Flynn's plea arrangement.

"The Obama administration may have ordered to go ahead and get a transcript of that conversation. It is possible, Marie, that a lot of this leads back to the Obama team," he said to former Obama State Department official Marie Harf.

Later on during the day, Mary Kissel, an employee of the Wall Street Journal's conservative editorial page (which is owned by the sister company of Fox News), kept at the Obama angle.

"My question is, is the FBI investigating what we found out in the first place, which was how Michael Flynn's name was leaked it to the press?" she asked.

Kissel claimed that Flynn was the only former Trump official who has been charged or admitted to crimes.

"Which is the only crime, other than this perjury, that we know about so far," she asserted. "Everything else is speculation."

Juan Williams, one of few liberals allowed on the air at Fox News, obliquely chastened his colleagues for trying to spin the news.

"I don't think we have to play politics with this," he said. "Everybody is sort of on the defensive this morning because there's so much we don't know."

"I think this is probably the tip of a prosecutorial iceberg, so to speak," he argued. "It's a nightmare for Donald Trump because Gen. Flynn was his constant companion."