GOP's dark victory: Tax plan is the end product of their war on Obama 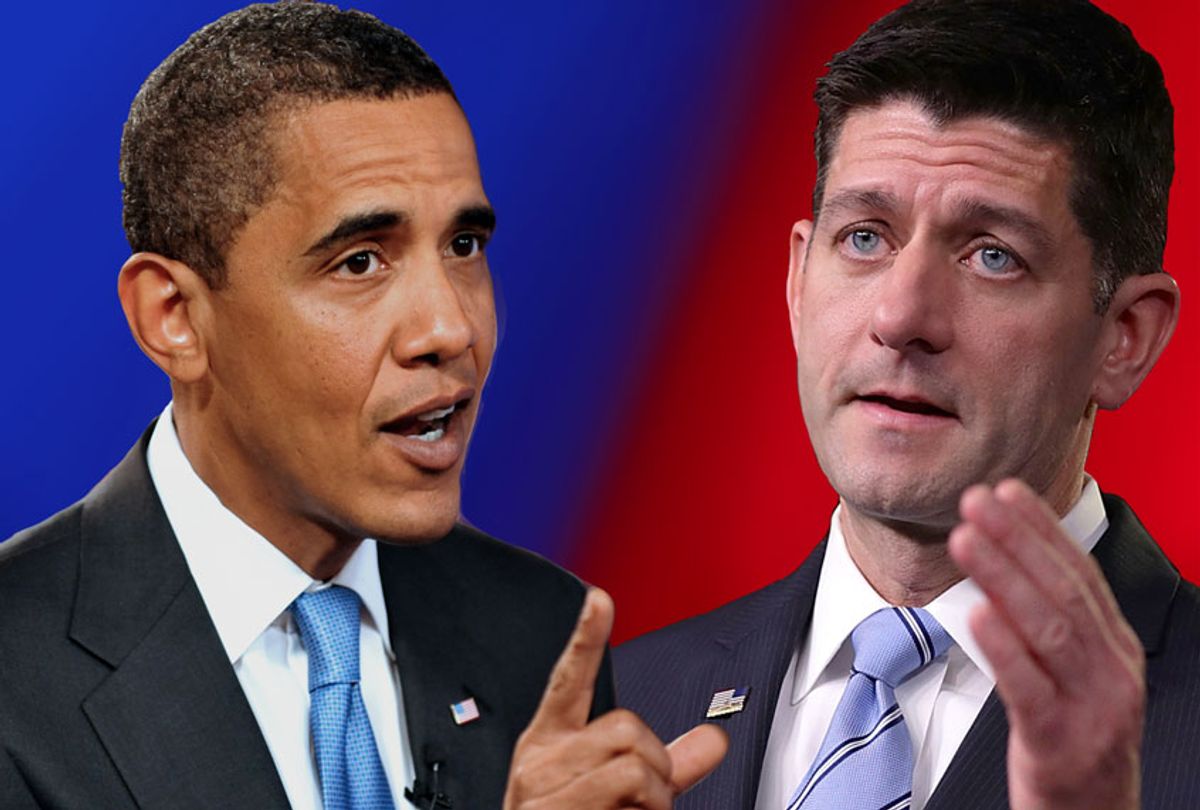 The furious political opposition that faced President Barack Obama at the beginning of his first term was, among other confounding factors, the consequence of a well-known Republican strategy known as “starve the beast.” The idea behind the strategy is to rack up an enormous deficit through tax cuts for the super-wealthy and other measures in support of supply-side voodoo economics, thus making it fiscally irresponsible for a subsequent Democratic administration to pass any meaningful legislation due to the accumulated Republican deficits.

Today, the congressional Republicans are doing it again with Donald Trump’s ill-conceived and punitive tax bill. Before we discuss exactly how, let’s rewind nearly nine years to the winter of 2009.

Most of us remember the economic meltdown of late 2008 and early ‘09. The economy resembled an unholy mess in the midst of a worsening global catastrophe, triggered by the collapse of the financial sector and the implosion of a gargantuan housing bubble.

How to repair such an upheaval? The best, most time-tested and generally bipartisan solution to mitigate a disaster of this magnitude has always been to pass an economic stimulus plan. So as we know, Obama chose to spend a colossal chunk of his political capital on such an endeavor. Circumstances demanded that the gaping chest wound in the economy be swiftly sutured or we might have face an apocalypse that would make the Great Depression seem quaint.

By the time it passed, the American Recovery and Reinvestment Act involved the largest middle-class tax cut in American history. Additionally, the stimulus launched hundreds of infrastructure projects to repave roads and repair crumbling bridges. All told, the price tag came to $787 billion, which is a significant chunk of change. Did it work?

If we reference a variety of economic indicators starting in March 2009, we’ll notice that the hemorrhaging stopped and the recovery began in earnest, eventually reducing unemployment from 10 percent to below 5 percent, while also triggering 75 consecutive months of job growth, a new record. The Dow Jones average rose from around 6,000 to above 20,000,  a 140 percent increase. Gross domestic product, meanwhile, climbed from negative 8 percent in the final quarter of 2008 straight into positive territory -- there was 4 percent growth by the end of 2009.

Despite the harrowing reality of the situation in January and February of 2009, congressional Republicans simultaneously crapped their cages, framing the stimulus as impending socialism. Everyone on Fox News and among the GOP caucus on the Hill commenced an ongoing conniption fit about the deficit, which, by the end of 2009, topped off at $1.4 trillion. Keep that number in mind. It’s important. Nevertheless, anyone with a firm grasp of recent history and politics knew that the George W. Bush administration began in 2001 with a budget surplus left behind by Bill Clinton. We also knew that Bush-era spending spiked the national debt and accounted for most of the $1.4 trillion deficit. Indeed, the Congressional Budget Office (CBO) noted that $1.2 trillion of the $1.4 trillion deficit was due to Bush-era spending.

Nevertheless, Republicans who authorized most of the Bush spending accused Obama of being fiscally reckless, of plotting a socialist revolution or even of installing Soviet-style communism with his so-called czars, so the GOP opposed the stimulus on those grounds. It turns out they were wrong and Obama was right.

The deficit, as it turns out, dropped to just $438 billion by the end of Obama’s two terms, a record reduction of more than a trillion dollars, and a thriving present-day economy for which President Trump has chosen to take credit. Thanks, Obama! Furthermore, the Republicans spent all eight years of the Obama era deliberately confusing their voters by substituting the national debt for the budget deficit and vice versa. For example, in 2012 Mitt Romney repeatedly insisted that Obama had “doubled” the deficit, even though, Romney said, Obama had pledged in 2008 to cut the deficit in half. It turns out, the deficit was halved by January 2013, when Obama was inaugurated for his second term. Romney lied.

Back to starving the beast and Trump’s tax legislation, which may have passed the U.S. Senate by the time you read this.

It turns out, according to the CBO, that the Republican tax bill would add another $1 trillion to federal budget deficit. This on top of booting 13 million Americans off their health insurance through the repeal of the Affordable Care Act’s individual mandate. Furthermore, the bill would actually raise taxes on most families earning less than $75,000. Not for nothing, but the coal miners Trump claims to love so much would be among the hardest hit by the president’s tax bill.

Regarding that $1 trillion deficit, the goal is obvious. Once the deficit is sufficiently inflated, the Republicans will insist that the only way to reduce the deficit, which they’ll somehow blame on the Democrats, is to cut Affordable Care Act subsidies, along with Social Security, Medicare and Medicaid. Adding to the cuts, you can rest assured the GOP will scream bloody murder if a future Democratic Congress or president tries to actually increase Social Security or Medicare benefits -- or, heaven forbid, tries to pass another economic stimulus. Watch the elephant heads explode.

Again, in keeping with what happened in early 2009, Republican deficits will magically turn into a huge problem for the Democrats to solve, all while Republicans refuse to take responsibility for their own reckless spending on tax cuts for Monopoly-men like Trump, Steve Mnuchin, Paul Manafort and the rest of the American oligarchy.

That’s what starving the beast is all about: Making it impossible for the Democrats to legislate by racking up enormous deficits, while finding a way to blame the Democrats for exploding the deficit and debt in the first place. That said, we now exist in a post-facts, post-reality era, so challenging the Republicans on their deficit flip-flopping will be nearly impossible. As with Trump himself, words don’t matter, facts don't matter and the past doesn’t matter. The future doesn’t matter because they’ll just blame the Democrats for everything. It’s all about the eternal now, which in this case calls for tax cuts for the rich, paid for by blowing up the deficit and passing the buck to working Americans -- unless, of course, the beast rises up right now to stop this atrocity before it becomes the law of the land.