James Franco sticks the landing in "The Disaster Artist"

Franco shares an unrestrained drive to expose himself with his subject, Tommy Wiseau 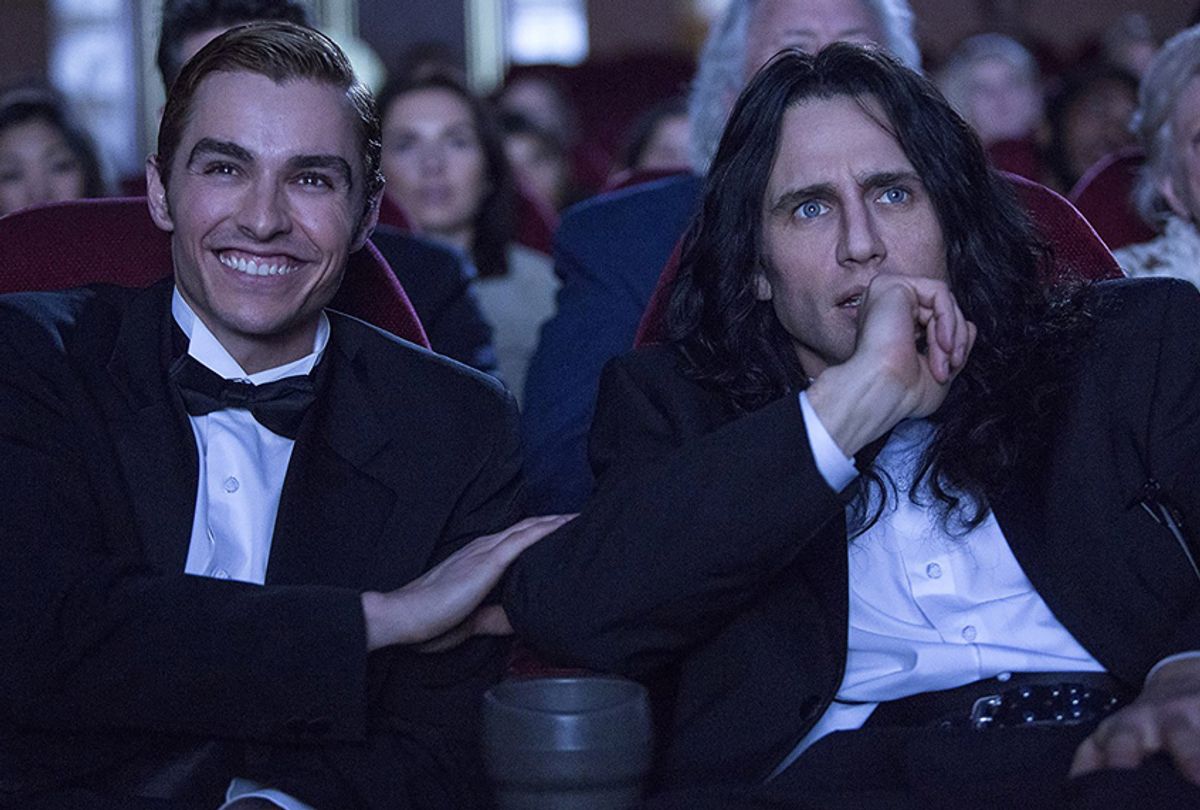 Dave Franco and James Franco in "The Disaster Artist" (A24)
--

With the release of “The Disaster Artist,” the film based on the book of the same name by Greg Sestero and Tom Bissell, James Franco is actually generating Oscar buzz for playing Tommy Wiseau, the writer, director, producer and star of arguably the greatest bad movie of all time, “The Room.”

“The Room,” for those who don’t know, is a cult film like no other. In their book, Sestero and Bissell describe the film as an act of “cinematic hubris,” made in 2003 for $6 million of Wiseau’s money. (Although no one knows how Wiseau came by his fortune, a bank teller assures a check-cashing crew member that Wiseau’s account is a “bottomless pit.”) The film earned $1,800 at the box office during its two-week, Oscar-qualifying run in Los Angeles in 2003, and received reviews only a masochist would read. Wiseau promoted the film with an expensive billboard in Los Angeles for five years. The signage features Wiseau’s visage, the title, credits, website and (Tommy’s) phone number.

His efforts eventually paid off. A cult of fans formed around the film after the theater posted a “no refund” sign, which dared viewers to sit through the entire film.

It slowly caught on, and monthly midnight screenings of the film began along with celebrities holding private “Room” parties to share their enthusiasm for this craptacular film. The enjoyment of the film comes from the absolute earnestness of its awfulness. “The Room” is completely without irony — and some would insist without logic — which is what makes it unintentionally hilarious.

As Sestero and Bissell write in their book, this vanity project became “a blockbuster . . . [just] not in the way Tommy had envisioned.” They describe it as “a drama that is a comedy that is also an existential cry for help that is finally a testament to human endurance.”

“The Room” asks fans, in Wiseau’s unidentified accent,* to play catch football in tuxedos in the alley, grimace at the sight of his naked ass, groove to the slow-jam music, and throw spoons at the screen because Wiseau’s lame efforts at production design have a framed photo of spoons on a table in Johnny and Lisa’s apartment. Sure, the script is a collection of non sequiturs, plot holes and variations on Tommy’s classic refrain, “Hi, doggie!” and more. But as Tommy famously declared on set, “Continuity is in your forehead!” Detractors can simply “leave your stupid comments in your pocket,” as Mark says in Wiseau’s “Tennesee [sic] Williams-inspired” script.

A melodramatic love triangle, “The Room” concerns Johnny (Wiseau), a man whose world crumbles after he learns his fiancée, Lisa (Juliette Danielle), is having an affair with his best friend, Mark (Greg Sestero).

There are other memorable characters who enter “The Room,” from Lisa’s mom (Carolyn Minnott), who “definitely has breast cancer,” to Denny (Philip Haldiman), a man-child who owes money to Chris-R (Dan Janjigian). “What kind of money?!” Lisa asks in the film’s famous rooftop scene. It is one of the many questions in the film that go unanswered.

One of the people enchanted by “The Room” is James Franco. When he decided to embark on making “The Disaster Artist,” and playing Wiseau, one imagines Franco getting as excited as Wiseau did with Sestero. James likely asked his brother Dave, a fellow “Roomie,” to make the film with him just as Wiseau asked Sestero. In fact, one can imagine James coaxing Dave with a “Let’s do this!” and pinky swearing to see the film through as Tommy (James Franco) and Greg (Dave Franco) do in the film “The Disaster Artist.” (The pinky swearing is not in Sestero’s book.)

If Greg drinks Tommy’s Kool-Aid (if not his milkshake) for “The Room,” Franco has done the same thing with “The Disaster Artist.” Franco is committed to inhabiting “Planet Tommy” with a go-for-broke work ethic as well as dyed long black hair, an indeterminate accent and non sequiturs.

The actor/director Franco has had mixed success in his adaptation of books into films. His William Faulkner and Cormac McCarthy dramas, “As I Lay Dying” and “Child of God,” respectively, are ambitious, but difficult. Franco’s foray into making films about films begat the documentary “Interior. Leather Bar.,” which reimagined William Friedkin’s “Cruising.” It was a curious misfire.

But with his turn as Tommy Wiseau in “The Disaster Artist,” Franco may have found an appropriate vehicle for his specific talents. Playing Wiseau allows Franco to act hammy, bare his ass, and crave approval — all things Franco does often and well.

Wiseau’s fearlessness is something Sestero admires in the book, and Franco seems to have Wiseau’s ambitions without self-awareness down pat.

How else to excuse Franco’s exhaustingly relentless career act of performance art that has him as an NYU student, an artist, an author, an actor, a writer, a director and more.

Perhaps it is the shameless need to expose themselves that also drives Wiseau and Franco to each show their ass in their films. Viewers wince at and mock the age-unidentified Wiseau’s bare derriere in “The Room.” As Sestero recounts in “The Disaster Artist,” Wiseau’s insistence on having an open (not closed) set during his love scenes was cringe-inducing for cast and crew. That Franco as Wiseau has an extended meltdown wearing only a cock sock in “The Disaster Artist” seems to be equally vain and self-serving. Although to Franco’s credit, he plays it for laughs, not gasps.

Restraint is not something either Wiseau or Franco have much of. Then again, both performers are ridiculed as much as they are respected.

Wiseau, before he was (in)famous, “acted like he was famous,” according to Sestero. Franco never seemed to miss an opportunity to be in the spotlight, either. There is a kind of “Look at me!” quality to Franco’s “The Disaster Artist”: Franco the filmmaker showcases memorable scenes of Wiseau in “The Room” side-by-side with scenes he re-created almost exactly for “The Disaster Artist.” These clips are terrific, and very amusing, but they also feel like Franco — like Wiseau before him — is seeking approval from everyone for his efforts.

Reading the book “The Disaster Artist” one gets the sense of how desperately Tommy wants to be loved and taken seriously. Wiseau is needy, selfish and pathetic. But Sestero feels empathy for his lost, lonely friend who does actually realize his improbable dream.

This friendship forms the emotional core of Franco’s “The Disaster Artist” as well. It is perhaps why the film is so satisfying, in its way. “The Disaster Artist” celebrates and satirizes its hero at the same time. Franco’s canny performance walks that fine line, going back and forth, taunting the audience to admire him like we do Wiseau.

*When I interviewed Wiseau for the Philadelphia City Paper in January 2012 and asked about his accent and where he was from — a question that still remains largely unanswered today — he said: “I grew up New Orleans, but used to live in France. My uncle used to work in Petroleum. Now I am an American and proud of it. People say I exaggerate my accent. I like sports.”