The long, sudden metamorphosis of Radiohead

With "Kid A," the band spent over a year forging a sharp turn away from melody and "snappy pop tunes" 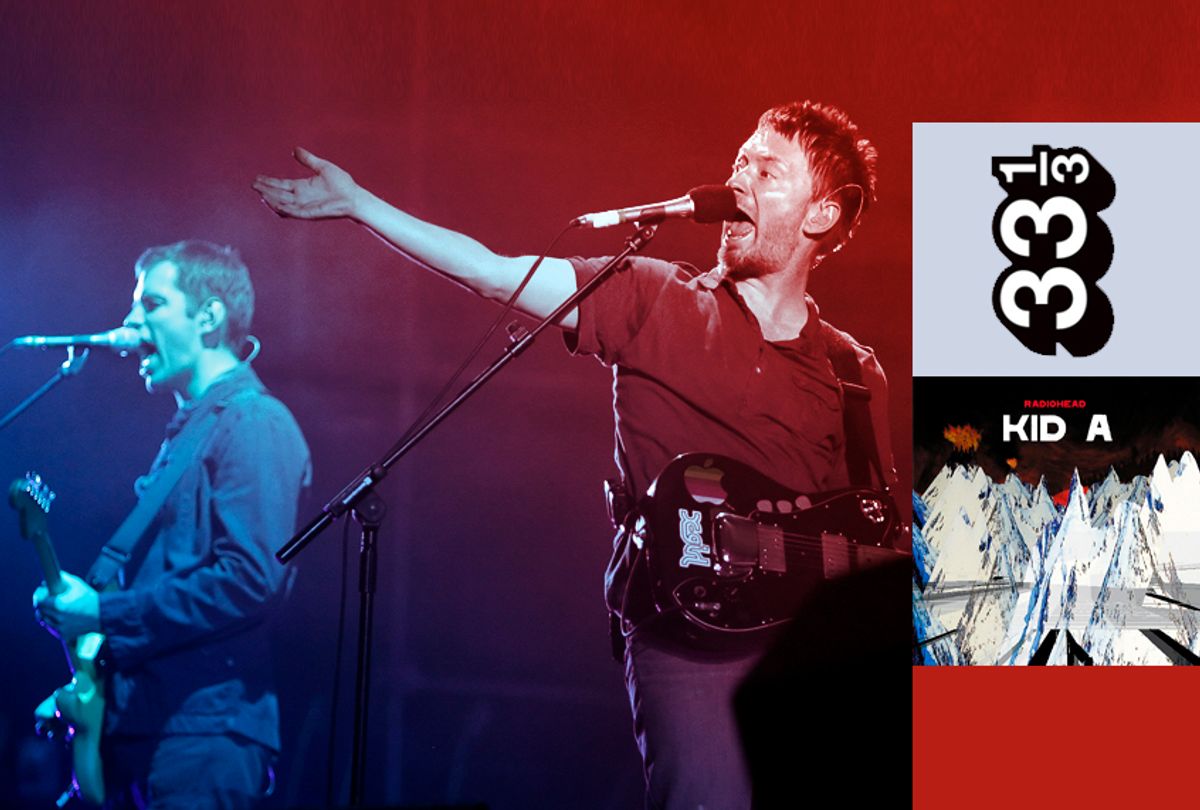 Excerpted from "Radiohead's Kid A" by Marvin Lin (Continuum, 2010). Reprinted with permission from Bloomsbury Publishing.

Reaching the point where Thom could freely experiment with his voice wasn’t easy. At the time, the band members had been playing music with each other for 15 years (and had known each other for roughly 20), finally garnering enough cultural and financial clout to boast leverage within a conservative major label system. This was no small feat for a band only three albums deep into its career. Imposing neither pressure nor a deadline, EMI — the music group that owns Radiohead’s then record labels Parlophone and Capitol — granted Radiohead one of the rarest luxuries: artistic autonomy bankrolled by a major conglomerate.

It was interesting, then, how tentative everything was. Explained Ed in an interview with Spin,

Musically, I think we all came to it a bit vague. Thom didn’t know exactly what he wanted the new record to be either, but he did know what he didn’t want it to be, which was anything that smacked of the old route, or of being a rock’n’roll band. He’s got a low boredom threshold and is very good at giving us a kick up the ass.

Clearly, Radiohead were neither interested in recycling "OK Computer’s" winning formula nor in hitting the stage of Celebratory Rock Theater. Responding to Ed’s original idea of regressing their songs into three-minute “snappy” pop tunes, Thom told Q, “F**king hell, there was no chance of the album sounding like that. I’d completely had it with melody. I just wanted rhythm. All melodies to me were pure embarrassment.” If "Kid A" was going to be anything at all, it certainly wasn’t going to be “rock.” At one point, Thom even entertained the idea of changing the band’s name in order to demarcate an aesthetic break from their first three albums.

But contrary to popular opinion, Radiohead weren’t out to alienate fans. With fame comes imitation, and Radiohead had a hard time dealing with the many bands — Travis, Coldplay, Muse — lifting their aesthetic like free weights (and leaving the politics alone, of course). “[There] were lots of similar bands coming out at the time, and that made it even worse,” said Thom to The Wire. “I couldn’t stand the sound of me even more.” And the similarities didn’t go unspoken: While some felt guilty about it (“When we won best band at the Brit Awards, the first thing I did was apologize to Ed O’Brien,” said Coldplay’s Chris Martin), others couldn’t even tell the difference (“I think [Radiohead] sound like Muse,” quoth Weezer’s Rivers Cuomo). Björk, who around that time collaborated with Thom on the track “I’ve Seen It All” for director Lars von Trier’s "Dancer in the Dark," spoke about this artistic appropriation on her website:

What really really hurts and I know I am speaking for a lot of people here, video directors, musicians, photographers and so on, is when a lifetime of work gets copied in 5 minutes with absolutely no guilt. That expression, ‘imitation is the sincerest form of flattery’ — it might be true, but it is the kind of flattery that robs you. I spoke quite a lot about this with Thom from Radiohead [a] couple of years ago, when every other singer on the radio was trying to be him, and he said it really confused him. After hearing all that, next time he stood by the [mic], he didn’t know anymore what was him and what was all those copycats. It is one of the reasons "Kid A" was so hard to make.

"Kid A," then, could be seen as Radiohead’s opportunity to construct a new identity, to pacify a desire for change because stasis would’ve meant tailspinning into the same predictable cycles; it would’ve meant going through the motions; it would’ve meant accepting the mythology. “There was no sense of ‘We must progress’,” said Thom. “It was more like, ‘We have no connection with what we’ve done before.’” As bassist Colin Greenwood put it, “[We] felt we had to change everything. There were other guitar bands out there trying to do similar things. We had to move on.”

But if distancing themselves from their previous aesthetic was the mission, where would they go and how would they get there?

Despite the uncertainty in direction, Radiohead realized that aesthetic renewal would necessitate a renewed approach. “If you’re going to make a different-sounding record, you have to change the methodology,” said Ed. “And it’s scary — everyone feels insecure. I’m a guitarist and suddenly it’s like, well, there are no guitars on this track, or no drums.” Influenced in part by German Krautrock group Can’s approach to songwriting, Thom’s desire was to shape half-formed ideas — sometimes just a beat or an interesting sound — into songs. He wanted to stumble upon sonics rather than force them into existence. “When we started doing the recording properly, I bought a new notebook and put at the front, ‘Hoping for happy accidents,’ and that’s basically what we were trying to do.” And since Thom — at that point completely enamored with electronic artists like Aphex Twin and Autechre — wouldn’t be satisfied with “rock music,” the recording process was made even tougher. Said Godrich to Spin: “Thom really wanted to try and do everything different, and that was . . . bloody difficult.” “There was a lot of arguing,” he said to the New Yorker. “People stopped talking to one another. ‘Insanity’ is the word.”

After several failed attempts, the band eventually got fully behind Thom’s quest for “happy accidents,” and in addition to his own contributions, the floodgates opened wide for the other members: Rather than wielding his ax, Jonny was primarily arranging strings and playing the Ondes Martenot; Ed and drummer Phil Selway could be found creating sounds on keyboards and sequencers rather than on guitar or drums; and instead of simply playing bass, Colin “drunkenly played other people’s records over the top of what [they] were recording and said ‘it should sound like that’” (it’s Thom, not Colin, playing fuzz-bass on “The National Anthem”). It was all a bit scattershot: many tracks were written entirely in the studio, some were tried and just as quickly ditched, and still others didn’t even feature every member. At one point, Godrich (often dubbed Radiohead’s “sixth” member) split the band into two groups to create music separately, not allowing them to play acoustic instruments like drums or guitar. At another point, they considered using no guitars at all. “We had to unlearn, get out of the routine,” said Godrich.

The recording sessions resulted in roughly 30 completed songs, which Radiohead had the unenviable task of whittling down to a proper album length. After drafting more than 20 different track listings, any song that ultimately didn’t fit the continuity and flow from opening track “Everything in Its Right Place” was left off, most of which were released the following year on "Amnesiac" (though, even that album’s second track, “Pyramid Song,” was in the running for "Kid A" as late as the early summer of 2000). After several arguments and debates, Radiohead eventually agreed on a firm ten tracks that would make up "Kid A."