Can capitalism be saved? Robert Reich's new movie isn't quite sure

Bill Clinton's labor secretary argues that the capitalist system needs rescuing. Yeah, but should we bother? 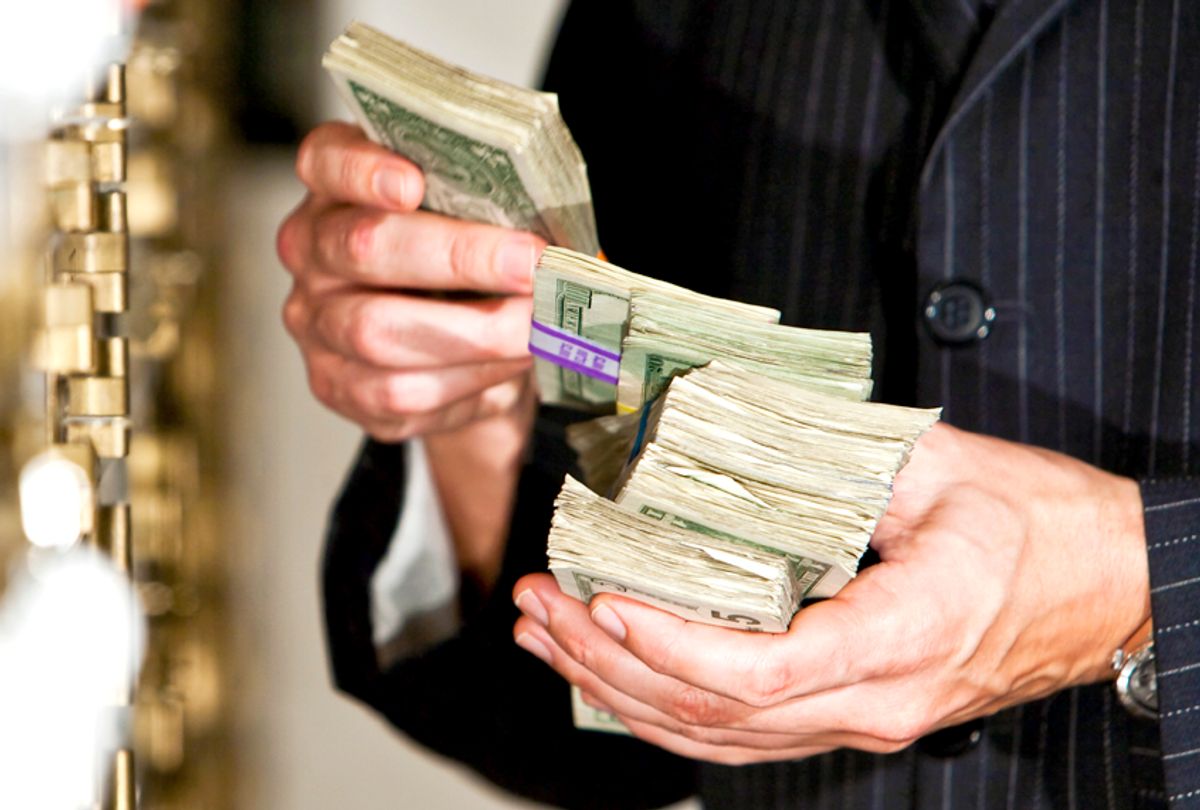 There is an interesting moment in Robert Reich’s new Netflix documentary, “Saving Capitalism,” when the former secretary of labor sits down for a dinner conversation with several businesspeople and lobbyists to discuss America’s economy and political system. After exchanging some pleasantries, the conversation quickly gets heated, and immediately the guests are defensive and mildly hostile toward the Berkeley professor, whom they accuse of scapegoating and demonizing them.

“You’ve vilified everything I’ve worked for all my life,” entrepreneur Annie Presley says to the liberal author and columnist. “I worked my ass off. But you made me feel badly about what I’ve done for America.”

It is clear right off the bat that these powerful lobbyists feel as if they have been unfairly vilified in the court of public opinion, and blame figures like Reich, who has been a vocal critic of business and lobbying power in the United States. Progressives, they no doubt feel, are responsible for much of the anger that exists toward them, and are stirring up a dangerous resentment that will eventually lead to more extreme and violent political acts.

This hostility toward the former labor secretary isn’t surprising. The rich are a particularly touchy bunch, and those with ethically dubious professions (for example, lobbyists) tend to be naturally defensive about what they do. Still, this enmity toward the liberal author is somewhat ironic, considering that Reich has been on a kind of mission over the past few years to prevent more radical movements from growing out of the current populist discontent. (This is clearly evidenced by the title of his documentary and his 2015 book of the same name.)

Contrary to what these businesspeople and lobbyists likely believe, Reich is not a radical leftist, but a moderate who is more temperamentally conservative. A true leftist wouldn’t write a book called “Saving Capitalism,” nor would he speak to someone like Rep. Dave Brat — the ultra-conservative Republican congressman from Virginia — about joining forces to combat “crony capitalism,” as Reich does later on in his documentary. In his conversation with Brat, who advocates policies like privatizing Social Security and repealing the Affordable Care Act, Reich remarks that “the old assumption has been that it’s Democrat versus Republican, but what we are beginning to see is that it’s actually anti-establishment versus establishment.”

“It’s the people who don’t want the big money and the crony capitalism, versus the crony capitalists,” observes Reich. Brat seems to agree, and is apparently on board with Reich’s project to save capitalism: “You and me are united if we can do this in the right way. Ethics and capitalism together.”

This sums up the overall theme of Reich’s documentary: It is not capitalism itself, but the deviant form of "crony capitalism," that is to blame for the skyrocketing levels of inequality and many other economic and political problems we face today. “There’s nothing inherent in an economic system that makes it immoral or moral, good or bad,” Reich says early on in the documentary, while responding to the question of why we should “save” a system that is inherently immoral. “It depends on how it’s organized. And if it’s organized for people, then it can be a good and moral system.”

Ultimately, Reich argues that “capitalism is what we make of it,” and that it is the rules under which it is administered that determine whether it works for the many or the few. “These rules don’t come from nature, they reflect the interests of those with the most power,” declares Reich, who writes in his book that “the notion of a ‘free market’ existing somewhere in the universe, into which government ‘intrudes’” is a myth, and that there can be no “free market” without government and rules generated by the government.

There is nothing explicitly wrong with Reich’s argument. Indeed, the former labor secretary’s core claim that economic power and political power are intertwined, and that those with the most power write the rules (and benefit from these rules), is clearly true. Reich is also correct to posit that capitalism needs saving; it has become increasingly clear that the current system is unsustainable in the long run.

Where Reich fundamentally diverges with others on the left, however, is on whether capitalism is really worth saving, and — more important — whether it actually can be saved. Reich’s thesis that a corrupted version of capitalism is to blame for today’s massive levels of income and wealth inequality, rather than the normal operations of the capitalist system itself, is also problematic.

In making the case that capitalism can and should be saved, Reich looks back to the social democratic and Keynesian reforms of the New Deal era, which curbed the excesses of capitalism and mediated class tensions that could have potentially led to more radical and extreme movements (i.e., communist and/or fascist). There is no question that these pragmatic reforms were enacted to save capitalism from itself, which appeared to be on the verge of collapse during the Great Depression. A 1931 quotation from Franklin D. Roosevelt leaves little doubt about the future president’s motives:

There is no question in my mind that it is time for the country to become fairly radical for at least one generation. History shows that where this occurs occasionally, nations are saved from revolutions.

Like FDR, Reich wants to avoid revolutionary violence, and thus advocates we become “fairly radical” once again. But it is far from clear whether that would be enough this time around. While Reich’s central thesis is that capitalism is neither good nor bad and that it depends on who writes the rules of the market, this ignores structural realities of capitalism.

Reich’s documentary strongly implies that today’s economic problems are almost entirely a result of powerful monied interests infiltrating the political system and rigging the game to benefit themselves. This is an important part of the story, of course, but it is only part of the story. While the neoliberal policies that began during the Reagan era have clearly accelerated economic disparities, it was capitalism that made all of this possible in the first place. The postwar era from 1945 to about 1970, which saw levels of inequality actually decline, was an anomaly in this respect. Although social democratic reforms certainly played an important role in this, it was also due to the extensive destruction of capital during the two world wars (as Thomas Piketty documents in his book “Capital in the Twenty-First Century”).

The global economy has changed enormously since the 1930s, and capital has essentially colonized the world. It has nestled everywhere, settled everywhere, and established connections everywhere, as Karl Marx predicted. This has undermined the ability of domestic governments to limit the excesses of capitalism, as they did during the 20th century. Capital has become too powerful, and throughout the world profit has come to take precedence over people (and the planet).

This has potentially catastrophic implications. If the contradictions of capitalism cannot be eased through state intervention, they will simply escalate until a tipping point is reached. A recent study conducted by researchers at Washington State University and 13 other institutions suggests that a tipping point may be closer than we think. According to the report, published in the scientific journal Nature, we are currently living in one of the most unequal periods in human history (going back to the Neolithic age), and history indicates that greater levels of inequality lead to greater social instability and unrest.

In a statement by one of the study’s authors, Tim Kohler, a professor of archaeology and evolutionary anthropology at Washington State, he notes that “inequality can have deleterious effects on health outcomes, on mobility, on degree of trust, [and] on social solidarity.”

For reformers like Reich, the goal is to prevent this kind of thing from happening. Anti-capitalists, on the other hand, believe that revolution is not only desirable but necessary. It is not crony capitalism, more radical leftists insist, but capitalism itself that is the problem. Under that interpretation, our current situation demands we become more than just "fairly radical."

To be radical is to grasp things by the root, and Reich’s analysis does not succeed in doing this. The problems that Reich documents in “Saving Capitalism” are, according to the author, a consequence of powerful interests capturing the government and writing the rules of the game. Again, this isn’t wrong, but it is only a part of the story, and Reich ignores the root cause -- the capitalist mode of production. The “golden age” of capitalism, which is often romanticized by liberals, was a brief and anomalous period in the history of Western capitalism, and historical trends show that wealth becomes increasingly concentrated as capitalism expands and evolves. It is possible, of course, that social democratic reforms could temporarily halt current economic trends like skyrocketing inequality, but these reforms would only be short-term solutions.

Saving capitalism, then, seems like a fool’s errand, even though Reich clearly has the best of intentions. The former labor secretary is ultimately offering a conservative approach to the problems we face today — one that billionaires would get behind if they knew what was good for them. Reform is always preferable to revolution for the ruling class, but today’s ruling class doesn’t seem to grasp the reality of our current situation.

The fact that Dave Brat, one of the most conservative members of Congress, is sympathetic to Reich’s cause, reveals its fundamentally conservative and pragmatic nature. But Reich may have trouble gaining support from those on the left, who are skeptical of his reformist approach. While they can all agree that capitalism needs saving, the question of whether it is worth saving is one that will divide liberals, social democrats and democratic socialists for a long time to come.