This should be obvious, but evangelical Christians' reasons for claiming to love Israel are deeply creepy 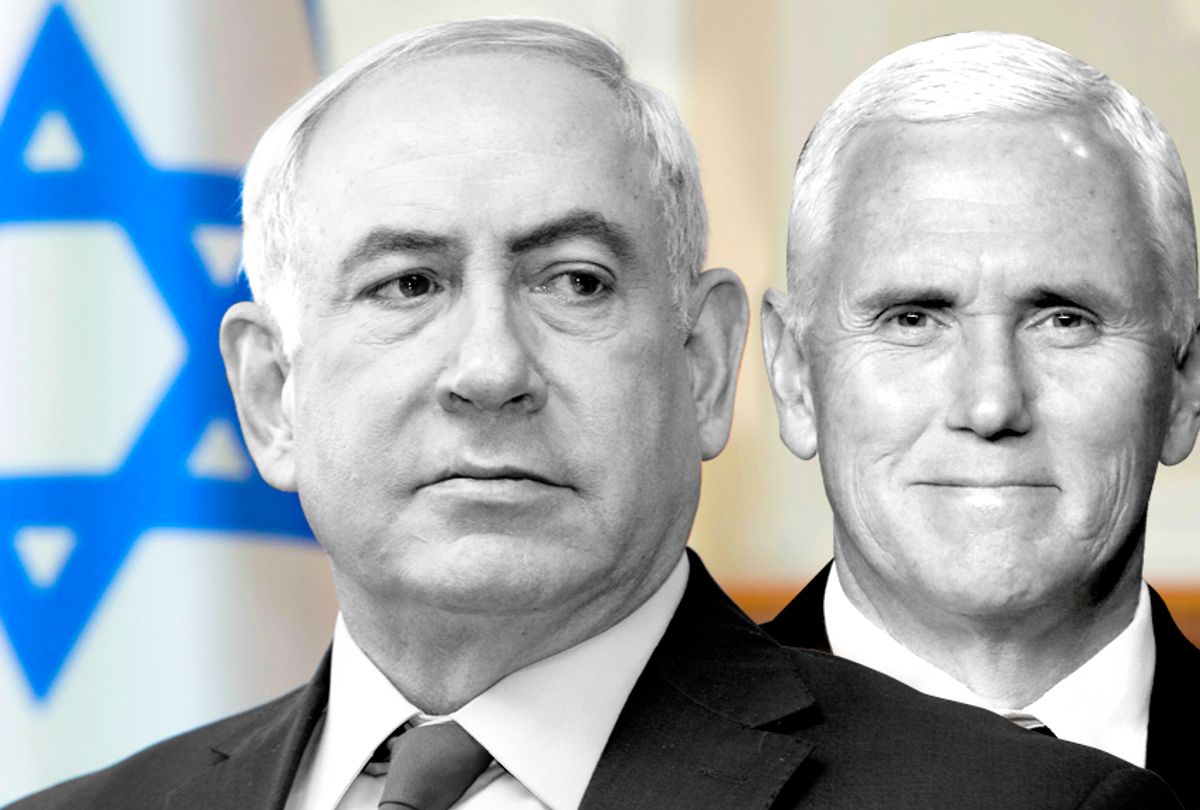 When Vice President Mike Pence talks about Israel, one disturbing phrase seems to pop up repeatedly: "the hand of heaven."

The most recent appearance of this term came earlier this week, when Pence spoke at the site of the United Nations vote that, 70 years earlier, had granted Israel its status as a sovereign state.

"While Israel was built by human hands, it's impossible not to see the hand of heaven here too," Pence told his audience, adding that he planned on visiting Israel next month to address the Knesset, Israel's legislative body. Just four months earlier, the vice president told Christians United for Israel that "though Israel was built by human hands, it is impossible not to sense that just beneath its history lies the hand of heaven."

The repeated references to a "hand of heaven" could be seen as a neutral invocation of divine inspiration, suggesting the shared religious heritage of Jews and Christians. But that doesn't take into account the underlying logic used by many on the Christian right for supporting Israel. Take Christians United for Israel, which is led by an infamous right-wing pastor named John Hagee. He, you may recall, once infamously claimed that Adolf Hitler was a "half-breed Jew" put on Earth by God as a "hunter" to set off a chain of events that would ultimately result in Jews being sent back to Israel.

It shouldn't be necessary to point out that a man who is willing to accept the Holocaust because it led to the creation of Israel isn't much of a friend to Jewish people. What is true for Hagee is also true for Pence, whose "hand of heaven" reasoning about the bloody events that occurred prior to, during and since Israel's creation isn't all that different from Hagee's thinking.

Yet far too many Jews are willing to forge an unholy alliance with the holier-than-thou crowd. Although Donald Trump fared poorly among Jewish voters in the 2016 presidential election — he won only 23 percent of the Jewish vote, his worst result among any Judeo-Christian religious group — there are still influential Jews who embrace Pence and his ilk because of their pro-Israel views. These are Jews like the Orthodox rabbi who spoke at Hagee's conference this year because, in his words, "If you have eyes to see, extremist Islam has taken over Islam. And this is the third world war!"

They're the ones who aligned themselves with the Christian right during the presidencies of Ronald Reagan and the two George Bushes. They're the ones I regularly see in comments sections praising Pence for his remarks about how much he loves Israel, or his suggestions that Trump should move the U.S. embassy there from Tel Aviv to Jerusalem. (A move Trump reportedly may make next week.)

These are Jews who believe, in short, that the need to protect the State of Israel is so great that it behooves them to embrace any politician who shares their cause. It is a reasoning that is both strategically flawed and morally bankrupt.

When you're talking about evangelical Christians who sincerely believe that those who don't share their faith are going to hell, it is hard to argue that they would be truly loyal allies. Their support for Israel is motivated in part by their hatred for Muslims and in part by their belief that the Jews returning to Israel after a 2,000-year diaspora fulfills a biblical prophecy. This is the same prophecy, it's worth noting, that eventually suggests that those same Jews must be either forcibly converted to Christianity or slaughtered.

The moral flaw behind making common cause with the Christian right is that this is a group defined by its general intolerance. Today their targets tend to be members of the LGBT community, women, secular liberals and virtually anyone else whose lifestyles don't align with their narrow worldview. A few generations earlier, however, Jews were prominently featured among the groups they vilified and distrusted. What does it say about Jews who are willing to make common cause with right-wing Christians who happen to have selected new targets for hatred and persecution? Is such intolerance only wrong when we are mistreated, but perfectly OK when it befalls others?

The good news is that Jews who think this way are still in the minority. A 2012 Jewish Values Survey found that Jews hold Mormons and Muslims, for example, in higher regard than the Christian right. Indeed, even though 82 percent of white evangelicals report that they believe God gave Israel to the Jewish people, only 40 percent of Jewish Americans share that view.

The bad news is that, because Pence is such an influential adviser to Trump — and, let's face it, may wind up being president of the United States himself one of these days — the wolf-in-sheep's-clothing brand of anti-Semitism that Pence champions could have major policymaking chops. If and when it does, Jews like myself must resist the temptation to perceive these folks as our friends.

They're not, and they never will be. When Pence speaks of a "hand of heaven" putting the Jews in Israel, he isn't saying that because he sincerely cares about the welfare or destiny of the Jewish people. He says it because he sees Jews as pawns in a grand, apocalyptic game that has a nightmarish outcome for everyone who doesn't subscribe to his worldview.