I never thought Fox News' morning show would slowly kill me, but here we are 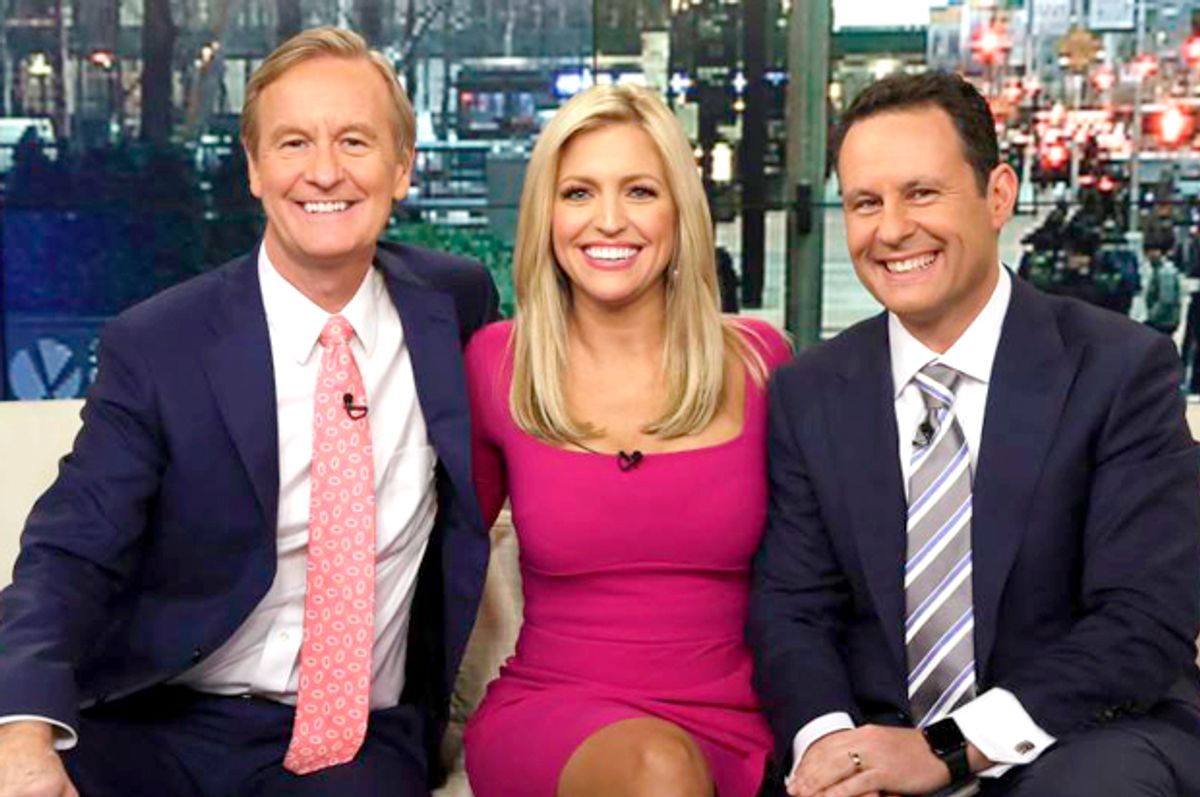 President Donald Trump is a conspiracy theorist with a hair-trigger personality, he prefers to take advice from what he sees on his TV screen over experts, and he has immense unilateral authority over the most powerful military in history. On any given day, the president of the United States could trigger historic death and destruction based on what he sees on his favorite morning cable news show, "Fox & Friends."

Every morning as I walk out of my apartment, I check my phone to see if President Trump has tweeted. If he has not, I enjoy a leisurely 45-minute stroll through downtown Washington, D.C., walking toward the sunrise to the Media Matters office. If he has, I rush in as quickly as possible, hurtling through the city to get to my computer so I can try to plot the presidential tweets against the day’s edition of Fox News’ morning show. The president’s affinity for the program and its insipid co-hosts, Steve Doocy, Ainsley Earhardt, and Brian Kilmeade, is well-known, their tendency to use the program to speak directly to the most powerful man in the world well-documented. An unnerving percentage of the time, I find that Trump’s early-morning tweets are the result of him responding to things he’s seen on that program, either in real time or on a tape delay.

The president's increasingly unsettling behavior places the show in a position of frightening influence.

Yesterday, The New York Times and The Washington Post published stories detailing Trump’s apparent detachment from reality. Per these reports, the president has been floating wild conspiracy theories in private conversations with White House aides and others, asserting that the "Access Hollywood" video in which he bragged about sexually assaulting women — for which he apologized last — was faked, raising questions about former President Barack Obama’s birth certificate, and claiming that massive voter fraud in the 2016 election prevented him from winning the popular vote. While the president’s tendency to publicly spout such conspiracy theories is well-documented, there was always the possibility that he did so deliberately, to achieve some political end. These reports strongly imply that he really believes the absurd claims.

This morning, as if in an effort to confirm the validity of the Times and Post stories, Trump — after apparently tweeting along to a few segments from "Fox & Friends" — invoked the baseless conspiracy theory that MSNBC host Joe Scarborough may have murdered one of his staffers in 2001 when he was a congressman.

So now that Matt Lauer is gone when will the Fake News practitioners at NBC be terminating the contract of Phil Griffin? And will they terminate low ratings Joe Scarborough based on the “unsolved mystery” that took place in Florida years ago? Investigate!

So Trump is a conspiracy theorist who seems to really believe anything that, in the words of the Post, helps “paint the rosiest possible picture of his presidency and his character.” He’s also incredibly suggestible, with a tendency to echo the position of the most recent person with whom he has spoken. And he lashes out at anyone he perceives to be disrespecting him.

That brings us to yesterday’s news that North Korea had test-launched an intercontinental ballistic missilethat it claims could deliver nuclear warheads throughout the continental United States. There remain several technical hurdles that North Korea may not have overcome, and substantial reasons to doubt its statement. But even under the best of circumstances, the increasing nuclearization of a pariah state in one of the most militarized spots on the planet would be a reason for increasing alarm. It’s easy to see how the situation could tip into disaster even if we had a smart, functioning president taking advice from experts.

We don’t. We have a president with no self-restraint and the focus of a gerbil who takes advice from cable news hosts who once tried to roast marshmallows with their bare hands on national television.

The good news (I guess?) is that based on his tweets, Trump seemed more interested in pivoting off "Fox & Friends’" coverage to attack CNN and NBC than he was in the show's segments on North Korea. And to be fair, that North Korea coverage focused on using missile defense technology to shoot down an ICBM, rather than on, say, a pre-emptive strike on North Korea’s missile site, the sort of thing which could lead to a catastrophic regional war and millions of deaths.

But in August, the last time the Korean peninsula became a topic of regular discussion, the program wavered back and forth between warning of the potential dangers of making the situation worse and praising the president’s bellicose rhetoric that experts were saying could send the situation spiraling out of control. And since then, the circumstances have only grown more fraught.

Depending on the hosts, guests, and producers of a right-wing gabfest not to send the president cascading into a nuclear crisis is no way to live. And yet, we do. So tomorrow morning, I’ll step out of my apartment, check my phone, and see what kind of day it’s going to be.