Thomas Malthus' vicious theory that the rich are moral, and the poor worthless, comes alive in Republican tax bill 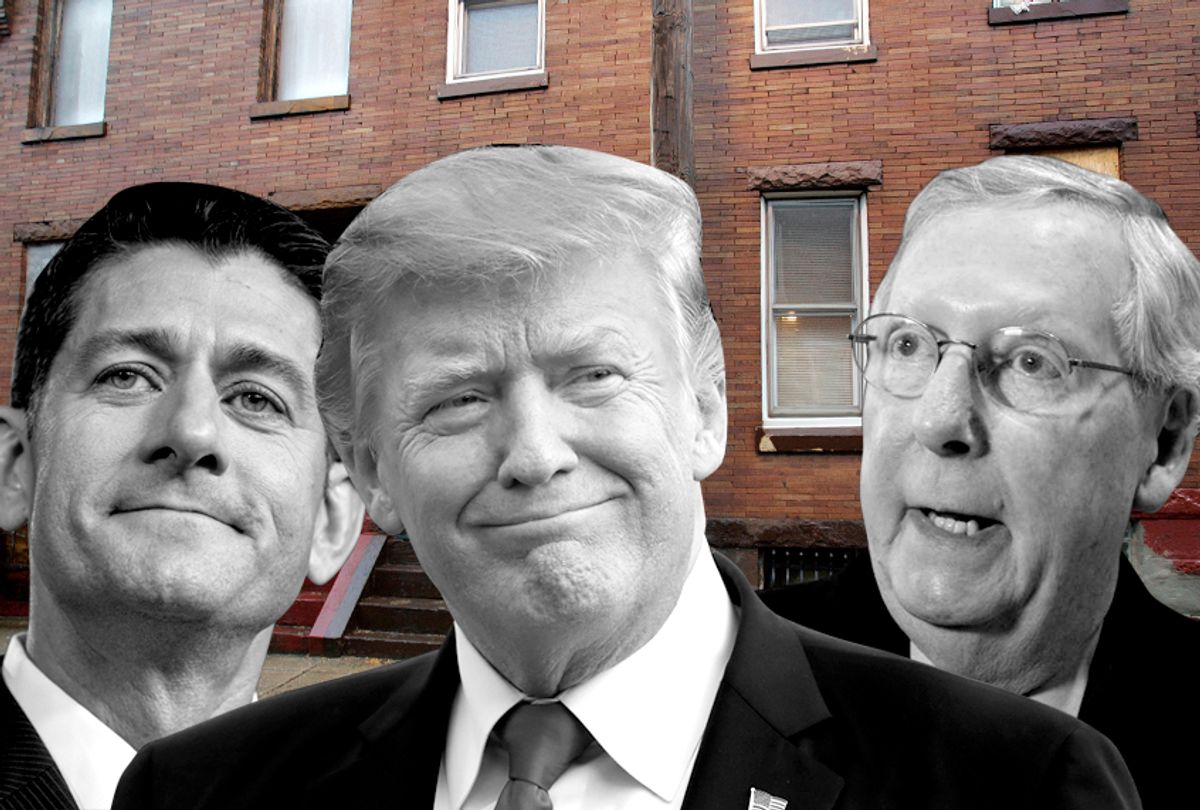 The Republican "tax reform" bill passed by the United States Senate during the late-night hours last Friday is evil. It has no redeeming social value. It takes money and resources from those who have the least in order to further subsidize the rich and corporations. It will worsen those problems its proponents claim it will solve. It is a nightmare. Republicans and others who support this legislation have revealed once again that they lack any human decency or wisdom or sense of civic responsibility.

This evil is facilitated by an extreme rightward turn in American society that has made normal and healthy politics all but impossible.

This evil will kill people and increase human misery so the idle rich and other plutocrats can have even more money. This statement is no exaggeration. It is a plain fact: The Republican tax bill will raise taxes on the poor and working classes in order to give the very richest American hundreds of billions of dollars. This is a clear statement of social and political priorities: The amount of money gifted to the rich by Republicans is so large it could have paid for debt-free college and universal health care.

This evil also reveals a moral and ethical rot. The Republican Party and Donald Trump's desperate desire to win a legislative victory at any cost was more important than being responsible public servants.

This evil is empowered by a party, a president and a right-wing movement that feels nothing but contempt for the very idea of democracy. The United States is in extreme peril. Moreover, the evil of the Republicans' "tax reform" bill is not a result of happenstance, accident or coincidence. It is an outgrowth of a much deeper malevolent ideology.

Republicans from the post-civil rights era to the age of Trump have increasingly been in thrall to "Social Darwinism" and the 18th-century English economist Thomas Malthus. In this paradigm, the real value of individual human beings (and societies) is determined by their economic productivity and financial value as decided by capitalism. This cruel vision treats human beings almost like animal livestock; "social betters" engineer certain outcomes to cull the herd so the most "valuable" and "productive" are nurtured and protected. All others are viewed as parasites who should be removed, exterminated or bred out of existence.

Writing at openDemocracy, sociologists Margaret Somers and Fred Block explain that in this view of human existence, a "free market society" consists of two opposing classes or "races": workers and property owners. While the latter were seen to embody "the high moral character of Enlightenment rationality," the working classes were seen as "motivated only by base instincts."

Then, as now, these two views of humanity — one noble and elevated, and the other biologized and crassly sexualized — conveniently supported a harsh set of social policies that aimed to abolish government assistance to the "undeserving" poor, while preserving and enhancing the privileges accorded to their "deserving" betters.

These ideas can be traced back to to the "anti-welfare zealotry" of an 18th-century clergyman named Joseph Townsend and also (especially) to Malthus, one of the founders of classical economics. Both, write Somers and Block, "advocated for an end to 'poor relief' in favor of exposing the unemployed to the harsh disciplines of the market."

In 1798 Malthus expressed alarm that despite a "generous" welfare system, poverty in England kept increasing. While others pointed to the effects of large-scale displacement from agriculture and rural crafts, Malthus reasoned from what we call the perversity thesis — the claim that assistance to the unemployed always creates more of the poverty it aims to alleviate. In this conception, receiving unearned resources incentivizes the unemployed not to seek work, thus perpetuating their own condition. . . .

Today’s "anti-compassionate conservatism" operates from this same principle: that “cruelty is the key to prosperity” as the economist Paul Krugman put it in a recent New York Times opinion piece. Hence the refrain made famous during the 2012 election campaign by Republican Presidential hopeful Mitt Romney and later reinforced by House Budget Chair Paul D. Ryan: that 47 per cent of Americans are “takers;” that poverty relief will turn the safety net into a “hammock”; and that food stamps turn the inner city into a “culture of dependence.” According to these modern-day Malthusians, removing benefits is necessary to compel the unemployed to work even if their children suffer in the process.

Later the authors quote another Krugman column, in which he wrote that "American politicians don’t dare say outright that only the wealthy should have political rights — at least not yet -- but if you follow the currents of thought now prevalent on the political right to their logical conclusion, that’s where you end up."

Malthusian logic is so common in American political discourse -- especially among Republicans and other conservatives -- that it barely receives any comment or critical pushback from the mainstream news media or the public in general.

Such logic is applied, for example, when conservatives derisively discuss "makers and takers," "job creators" and "illegal immigrants," "anchor babies," "moochers" or "welfare queens." This logic is then enacted into public policy whose true end goal is the radical transformation of American society into a deranged social-Darwinist fantasyland.

First, in his day (early 19th century) Malthus argued against the poor laws (akin to our welfare system) because he believed any support to the poor would diminish their drive to work and result in them having more children (which -- in turn -- would result in further poverty). This way of thinking is remarkably similar to that of contemporary Republicans who have consistently used this logic to argue for cuts to the Supplemental Nutrition Assistance Program (SNAP), formerly known as food stamps.

Second, Malthus framed aid to the poor as a waste of resources "that would otherwise belong to more industrious and more wealthy members" of society. Again, we see this logic embedded in Republican arguments for reforming the tax code in a way that benefits the wealthy.

Third, Malthus' argument was very classist in the sense that poor people behaved one way (e.g., they were lazy and had lots of babies) and wealthy people another. This classist logic then gets mixed up with racism and is frequently applied to darker-skinned people. We saw this in the way Malthusian logic was deployed (by British Lords) to argue against aid for victims of the Great Irish Potato Famine in the mid-19th century (and the Irish were the blacks of their day). Today we see Republicans stereotypes of African Americans (poor with too many children) as quintessential Malthusian framing.

Republican and other right-wing elites consistently echo such values. The examples are many. Sen. Chuck Grassley, R-Iowa, recently defended the reduction or removal of estate taxes this way: “I think not having the estate tax recognizes the people that are investing — as opposed to those that are just spending every darn penny they have, whether it’s on booze or women or movies.”

Sen. Orrin Hatch, R-Utah, recently discussed funding for CHIP, a federal program that provides health care for needy children. He reluctantly conceded the program had to be reauthorized, but added: "I have a rough time wanting to spend billions and billions and trillions of dollars to help people who won’t help themselves – won’t lift a finger – and expect the federal government to do everything.”

Republicans and other conservatives have gone so far as to suggest that food and water are not, in fact, basic human rights. As conveyed by Jane Mayer in an interview at the Nation, Robert Mercer, the investment-fund billionaire and right-wing power broker (and a funder and supporter of Steve Bannon's various projects), has reportedly told his close associates that he believes "a human being is only worth as much as they can earn":

He argues that he earns thousands of times more than a school teacher, which makes him that much more valuable than school teachers. And people on welfare, he suggests, have no value. They have negative value. He argues, though, that cats have value — because watching them provides pleasure to people.

Transferring the American public's resources upward to the rich has been the religion of the Republican Party from at least the 1970s through to the present. Deregulating the economy and annihilating any claim that in a good society human beings have basic responsibilities to one another are central elements in this strategy. Here the economic philosophy often called "neoliberalism" -- which could perhaps be more appropriately labeled "gangster capitalism" -- is closely connected to Malthusian and Social-Darwinist beliefs.

Moseley, added the following context in his email exchange with Salon:

Neoliberalism is consistent with Malthusian thinking in that both prefer little to no social welfare (or aid to the poor), and these ideologies are against progressive taxation policies that redistribute wealth from the rich to the poor.

The past is prologue, in an especially cruel sense. Republicans are deliberately advancing a backward-facing view of American society and human development. The next step in their war on the American people has already begun, with arguments that programs such as Medicare, Medicaid and Social Security are somehow too expensive, and thus unsustainable, because of the destruction caused by their tax bill. What is the ultimate goal? It may be no exaggeration to suggest they wish to eliminate the "useless eaters" in order to ensure the plutocrats and oligarchs of total power and endless wealth.