Republicans are ready to break their promise to Dreamers

John McCain and Jeff Flake may fight their own party on DACA, but GOP leaders are ready to back away from a deal 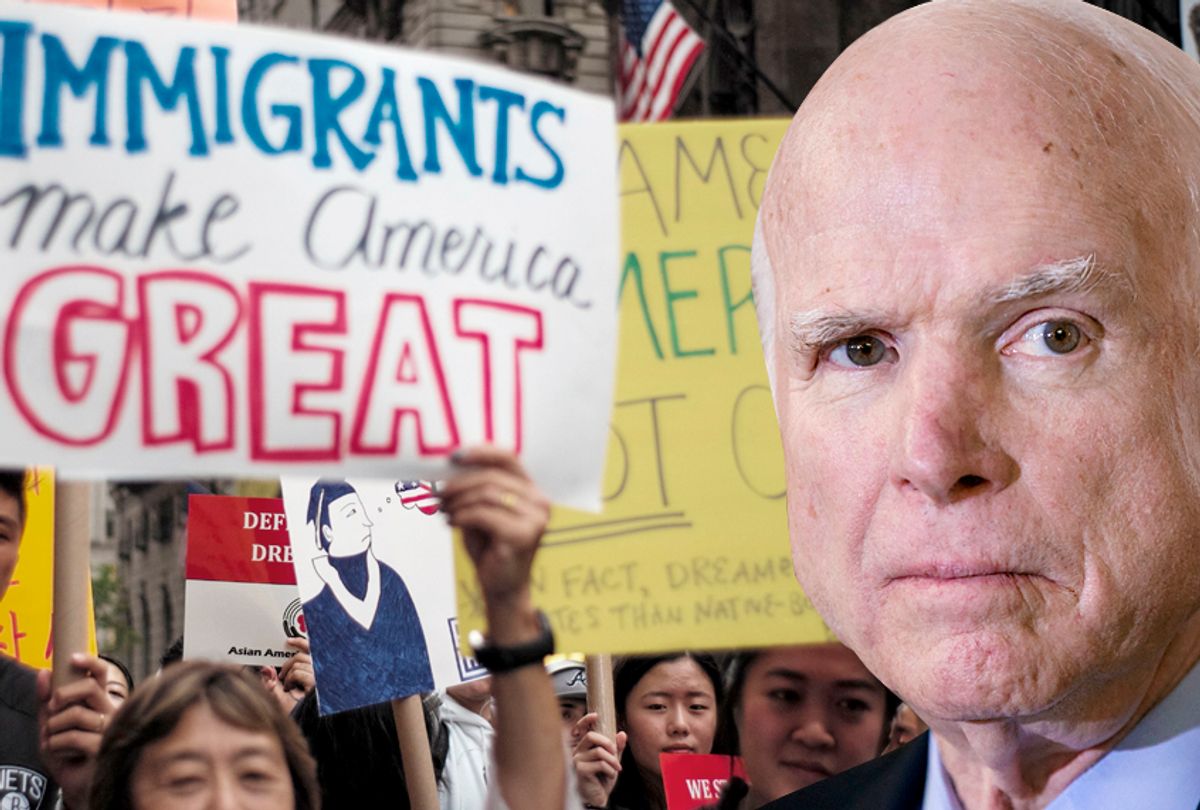 In four days, 800,000 young people's futures will once again be in limbo. The federal government also faces a shutdown if Congress doesn’t pass a new funding bill by Friday night. President Donald Trump has repeatedly said he wants to help the 800,000 Dreamers living, working and attending school in the United States, but his decision to link their fates with a dysfunctional Congress that has been nearly unable to pass legislation — even when it comes to a government funding resolution — seriously jeopardizes their future.

Republicans will try to give Congress two more weeks, until Dec. 22, to come up with a funding deal -- and possibly a deal on Deferred Action for Childhood Arrivals (DACA) -- but right now things aren’t looking good for Dreamers. Leaders from both parties will meet with Trump at the White House Thursday for talks on the issue, which continues to enjoy bipartisan support, according to public opinion polls. Democratic leaders have said they won’t leave Washington without some resolution for the Dreamers.

Sen. Jeff Flake, R-Ariz., told reporters last week that he received assurances from GOP leaders that Congress would come up with a DACA fix in exchange for his vote on the GOP’s tax bill. But as with so many of the promises Republican leaders made to their members to get them on board with a deeply unpopular tax plan, there is no guarantee that a DACA deal will ultimately be included in the must-pass spending bill.

Technically, DACA will not expire until March, under the terms of an executive order signed by Trump this fall. Unless some updated version of the Dream Act is passed and implemented before the March 6 deadline, more than three-quarters of a million people who have lived nearly their entire lives in the United States will be stripped of their ability to work and become immediate targets for deportation. Even presuming that Congress eventually passes legislation to help Dreamers, it could take as many as seven months for U.S. Citizenship and Immigration Services to process applications, according to estimates by the Niskanen Center and National Immigration Forum.

Despite this devastatingly tight time crunch, Republican leaders now seem prepared to back out of their agreed-upon negotiations.

“There is no crisis,” Senate Majority Leader Mitch McConnell, R-Ky., said on ABC’s “This Week” on Sunday. “I don’t think the Democrats would be very smart to say they want to shut down the government over a non-emergency that we can address anytime between now and March.”

“The deadline is March, as far as I understand it,” House Speaker Paul Ryan, R-Wis., said last week. “We’ve got other deadlines in front of that, like fiscal year deadlines and appropriation deadlines.”

McConnell and Ryan are shamelessly trying to move the goalposts to the very end of the game. There is little chance Republicans would advance the Dream Act without the prospect of a looming government shutdown forcing them to act. That is why this can was kicked down this particular road by both the Trump administration and Democrats earlier this year. As Huffington Post's immigration reporter Elise Foley notes, “The March deadline excuse started when Trump first rescinded DACA in September and said he was giving Congress six months to act.” He then told Republican senators during a White House meeting in early November that a Dreamer fix should not be part of the year-end negotiations.

For Republican leaders now to act as though their caucuses will suddenly snap out of a state of self-serving dysfunction in order to act on behalf of undocumented immigrants is too ridiculous for even their fellow Republicans to swallow.

"To have those kids go through another end of the year without knowing what their status is, is not good," Flake said Monday evening. "There are a couple of issues we still need consensus on, but we're getting close on a number of them." The Arizona Republican, who has announced his retirement after only one term in the Senate, is now working with Sen. Michael Bennet, a Colorado Democrat, on legislation that specifically deals with Dreamers, a spokesperson confirmed to Politico.

Other retiring Republicans have also stressed the urgent need to pass Dreamer legislation. South Florida Republicans Rep. Carlos Curbelo and Rep. Ileana Ros-Lehtinen said they would not support a spending deal without protections for Dreamers.

Flake’s Arizona colleague in the Senate, John McCain, has signaled that he plans on returning to his supposed maverick roots to fight his party on this issue. While McCain disagreed with President Barack Obama’s 2012 executive order to protect some undocumented immigrants who arrived as children from deportation, he says that rescinding the DACA program “is an unacceptable reversal of the promises and opportunities that have been conferred to these individuals.”

There may also be a political reason for Republicans to back such a deal.

Ten of the Republican-held House seats Democrats hope to flip next year are in districts that have big Hispanic populations. Democrats need a relatively modest net gain of 24 seats in the 2018 midterm elections to win control of the chamber.

Still, some conservatives in Congress appear ready to play hardball politics over the fate of the Dreamers, using them as bargaining chips in the funding battle — and may even be willing to shut down the government over it.

“We’re making it very clear to [Democrats] that if they think a year-end deal that threatens a shutdown is a pure Dreamers-DACA codification, that they’re probably going to lose that battle,” North Carolina Republican Sen. Thom Tillis told McClatchy Monday night. "If it’s a one-sided deal they think they can get just because they’re going to come to the table and see who blinks, they’re making a mistake.”