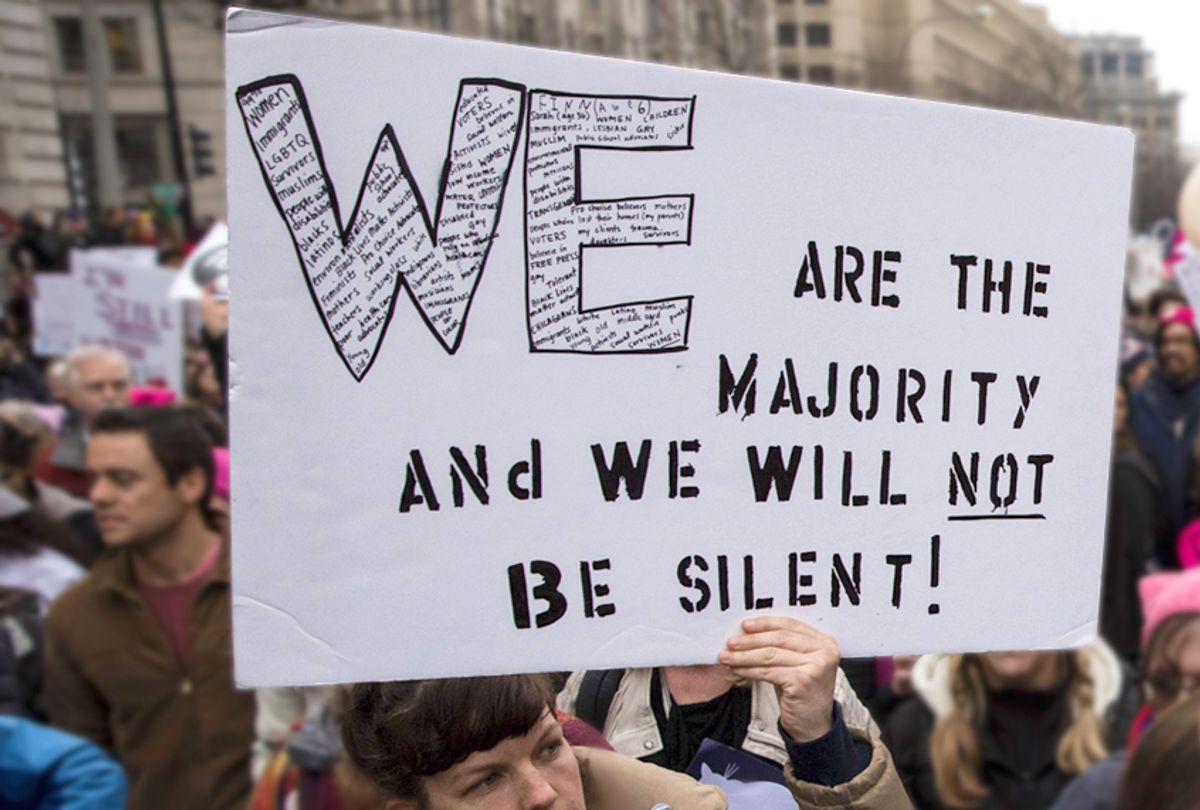 Two months after the New York Times published an earth-shattering exposé about Harvey Weinstein's history of alleged sexual harassment and assault, the #MeToo movement shows no signs of slowing down. Every day, it seems there's a new set of stories about men in power using sex as a weapon to humiliate and intimidate women (and sometimes other men). Now Time magazine has named "The Silence Breakers" as Person of the Year, crowning this surge of anger over sexual harassment as one of the most important stories of 2017.

It's been a big media story, but has all this righteous anger over sexism really penetrated the consciousness of everyday Americans? Has this genuinely rattled ordinary people and their views on gender and power? A new study out by the research firm PerryUndem provides a surprising and encouraging answer: Yes, the past year has seen something of a feminist awakening in the American public. It's not just about Weinstein or the revelations of the past two months. It's been a year in the making, as evidenced by the outrage over Donald Trump's election and the Women's March in January that was likely the largest single protest event in modern history.

Tresa Undem, the pollster in charge of the study, told a press call on Wednesday that Hillary Clinton's defeat, Trump's infamous comments on the "Access Hollywood" tape and the Women’s March all "really contributed to the atmosphere we’re in right now."

On questions designed to gauge whether voters believe sexism is real and serious, Undem found a huge surge in more feminist-minded thinking in voters over the last year. Last year, 65 percent of those polled felt men had more positions of power in society than women. Now 87 percent do. There were similar findings on questions about women's leadership, the impact of sexism and whether the respondents talked about sexism with their friends and family. 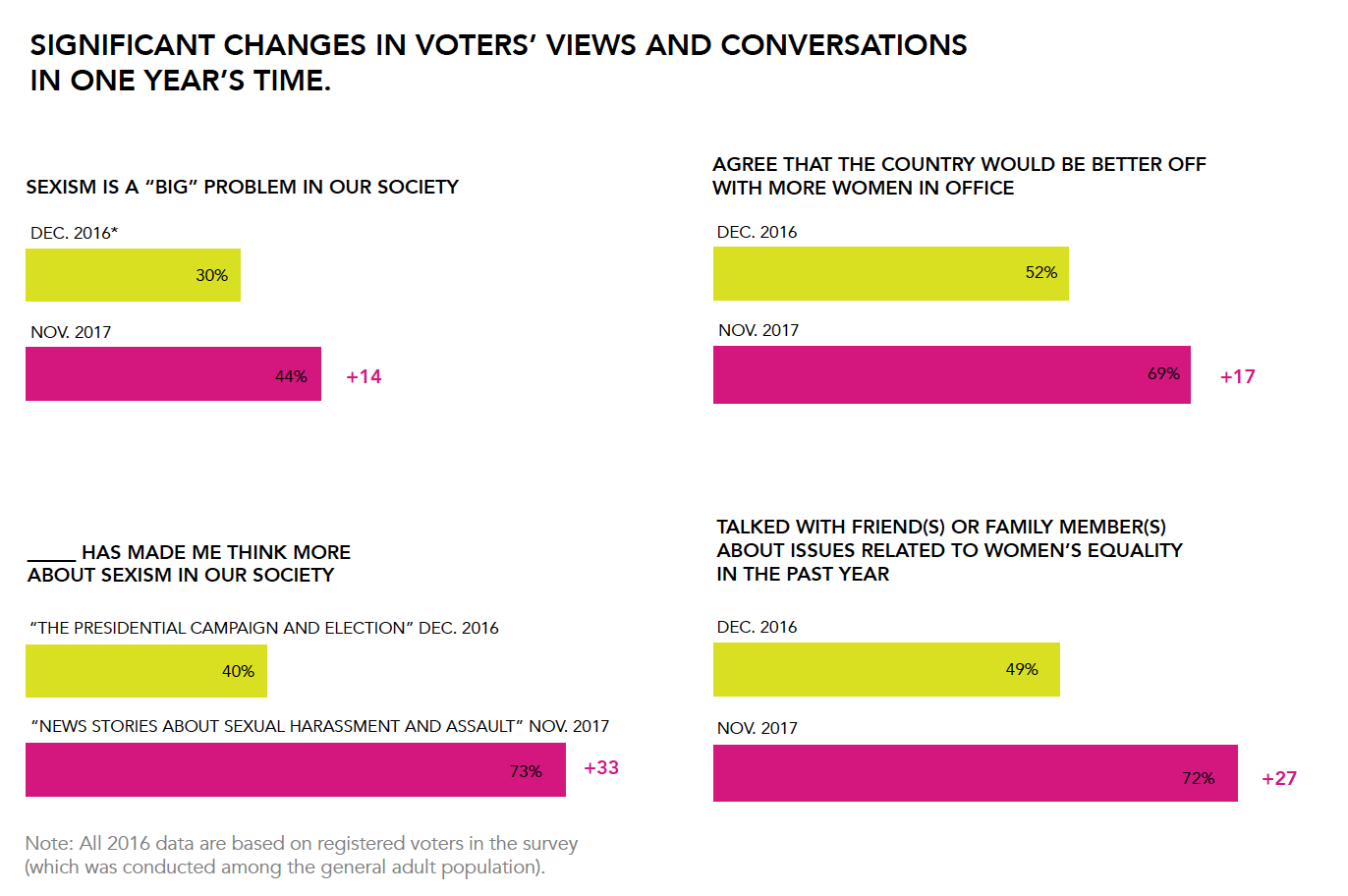 "As pollsters, we don’t see shifts in attitudes this big," Undem said. She noted that similar findings have cropped up in more than 200 focus groups PerryUndem has conducted in the past year. Women are using the word "misogyny," something that used to be unheard of. People are talking about sexism in more concrete, thoughtful ways than they had in previous years.

Last year, a similar survey found that Republicans of both genders were skeptical that sexism was a real issue. But now a gender split is widening, and Republican women are starting to say things that indicate an acceptance that sexism is real, even as Republican men still resist the idea. For instance, the only group surveyed that denied that men experience social pressure to be dominant were Republican men. 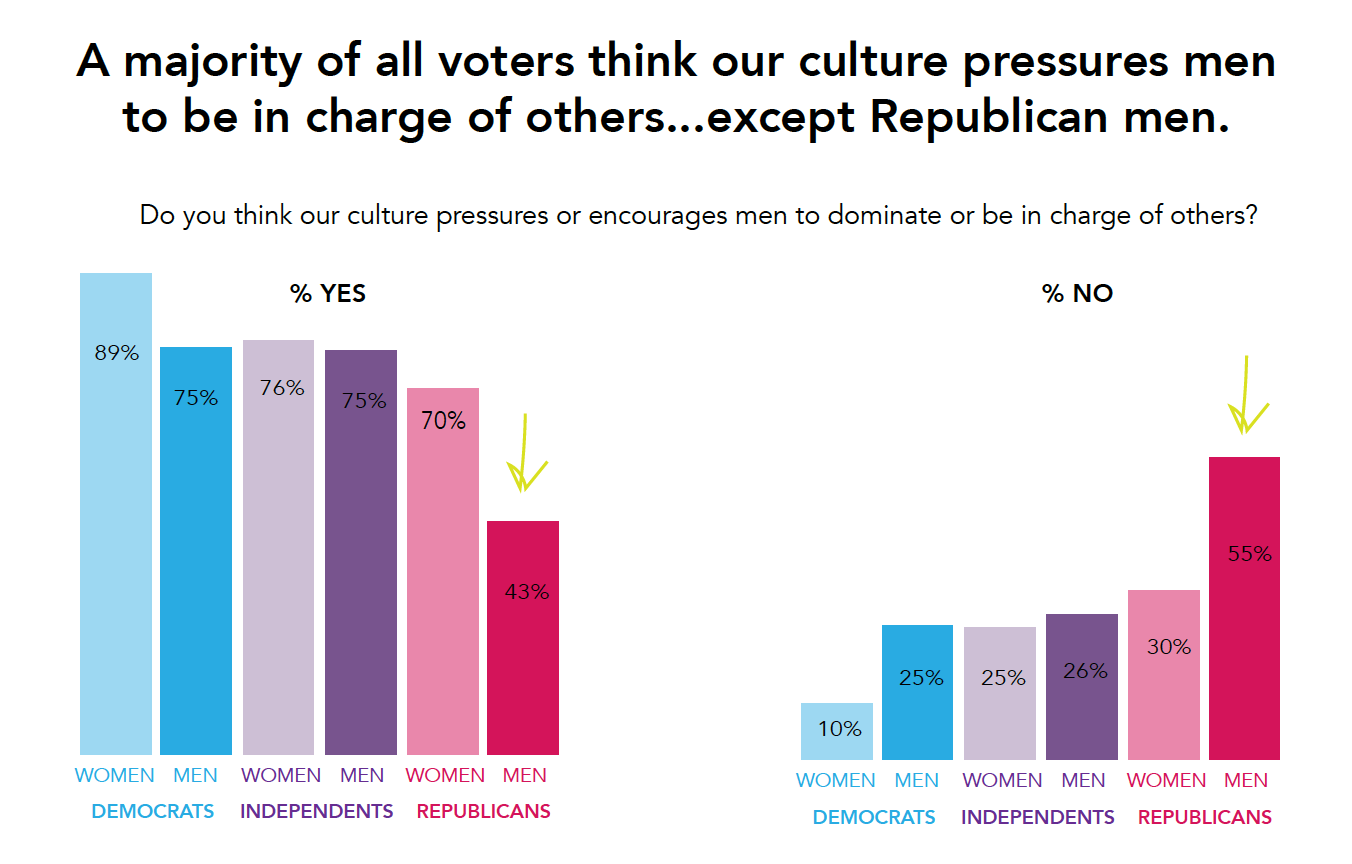 The majority of Republican women joined with Democrats and independents of both genders to agree that men have more power than women at work. Only Republican men dissented, with 58 percent believing it was balanced between the genders or that women had more power.

Fox News and other conservative media outlets have opportunistically made a huge fuss out of sexual harassment accusations against Democratic elected officials or celebrities associated with liberal causes (like Harvey Weinstein), while selectively ignoring similar accusations against conservatives. Whatever short-term partisan gain they got from this move appears to have backfired, however, by making sexual harassment seem like a nonpartisan issue and thereby giving Republican women an opportunity to express more disapproval of sexism in the workplace.

“I wouldn’t say it turned Republicans into feminists, by any means," Undem said, but she noted that people are talking about these issues more to friends and family and "that’s when you see culture change."

The poll also indicates that the public has learned a lot about the nature of sexual harassment from the #MeToo movement and widespread coverage of Trump's comments on the infamous "Access Hollywood" video, where he bragged about kissing and groping women without consent, adding, "when you’re a star, they let you do it." The myth that sexual harassers are misguided Romeos who are just clumsily trying to flirt has given way to a greater understanding that men harass in order to dominate women, as feminists have long asserted. Eighty-six percent of those surveyed indicated a belief that men harass because of the "desire for power and control over women," and 88 percent expressed a belief that they do it "assuming they won't get caught or face consequences."

Many feminist commentators in the past two months have expressed frustration over the fact that while many men in media and politics are being held accountable for sexual harassment, President Trump, despite the mountains of evidence against him, seems to be escaping justice. The good news is that PerryUndem found the public agrees with them. Seventy-six percent of Americans believe Trump has "definitely" or "probably" sexually harassed women, and the same number believe he should be investigated for it. Startlingly, even 43 percent of Trump supporters said they wanted an investigation.

When people were asked what word came to mind when thinking about Trump and women, the answers were largely negative.

While Americans are starting to wake up to the problem of gender inequality in the public sphere, however, there's still a widespread reluctance to look at inequality in the home. Forty-eight percent of voters surveyed believed men and women are equal in romantic relationships, while only 40 percent say the man tends to have more power. Democratic women were the only demographic slice where a majority of respondents said men had more power in the the home. Republicans and independents of both genders were likelier to say romantic relationships were equal, and Democratic men were dead even, with 43 percent claiming romance is egalitarian and 43 percent saying men have more power.

Social change happens slowly, and asking people to interrogate their own life choices is always going to be harder than asking them to cast judgment on issues like sexual harassment in the workplace. These results are genuinely heartening, however, and seem to make clear that the #MeToo movement is more than a media trend. It might actually be the beginning of a real shift in American culture.