Moore is less: Alabama, Senate and nation will suffer

As the special election approaches, Republicans abandon morality for power 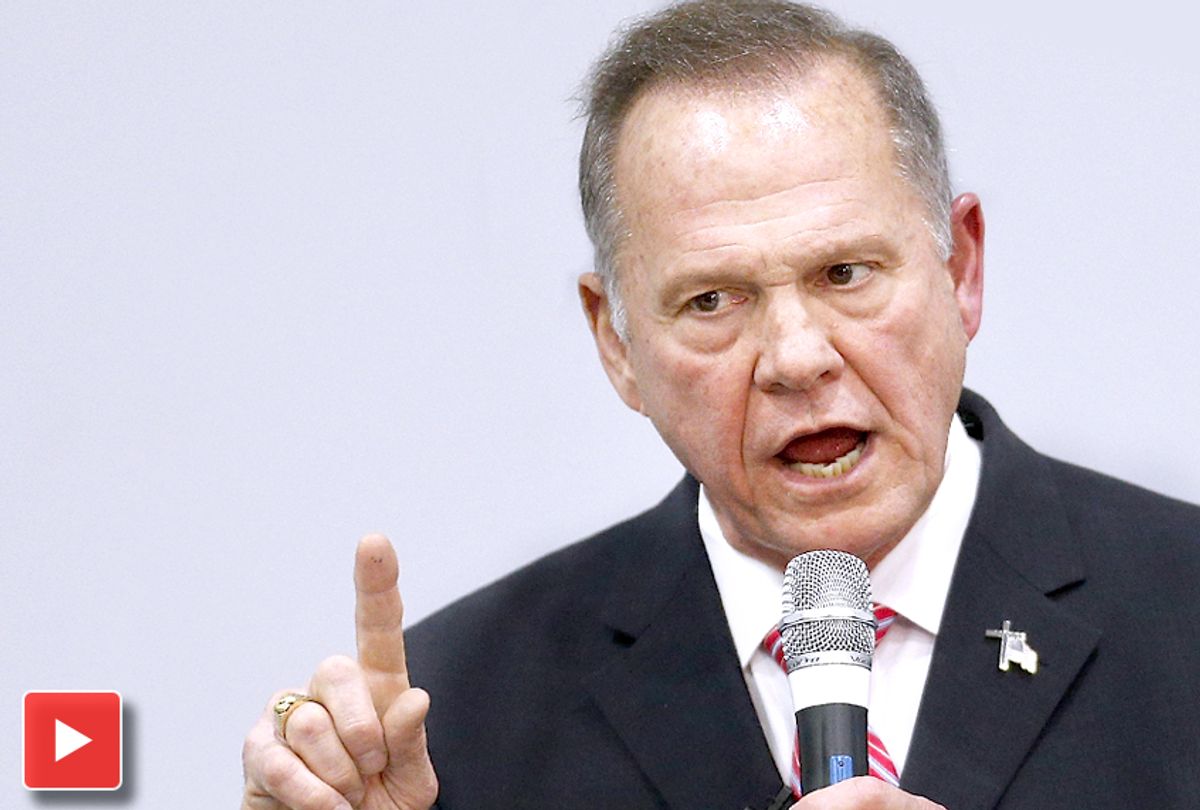 Amid all the craziness surrounding Roy Moore’s race for the US Senate and the seeming willingness of Alabama’s likely voters to send a man of such dubious merit and morality to Capitol Hill (where, admittedly, the bar already is pretty damned low), I keep thinking of a line from the Randy Newman song “Rednecks.”

It’s the lead piece on his classic ’70s album Good Old Boys, and begins with a Southern man lamenting how the north-of-the-Mason-Dixon-line media types make fun of former Georgia Gov. Lester Maddox, the arch-segregationist notorious for using an ax handle to threaten those who tried to integrate his fried chicken restaurant.

“Well, he may be a fool but he’s our fool,” Newman sings, and yep, there’s the upcoming Alabama election in a nutshell. Outsiders are resented and tribalism reigns, no matter how irrational or destructive to self-interest.

“Thank God for Mississippi” is the old joke: No matter how bad things were in Alabama, there always was a state right next door where things were often worse. Alabama is the third “hungriest” state in the nation, with 18 percent of its population food insecure, behind Louisiana and, yes, Mississippi. It’s the sixth-poorest state, with some 18.5 percent living in poverty, and the third-highest state when it comes both to murders and the number of citizens behind bars per 100,000 members of population. According to the Centers for Disease Control, opioids are prescribed in Alabama more than in any other state, and a Center for Health Statistics report notes that Alabama’s rate of overdose deaths from opioids has doubled since 2011.

But no, instead of campaigning about how to get the federal government to help his state pull itself from the clutches of such poverty, hunger and addiction, Roy Moore acts like a crackpot false prophet, preaching Islamophobia, homophobia and the dominance of “God’s law” over the Constitution; denying the allegations of the many women who say he assaulted or harassed or stalked them when they were teenagers (on Tuesday, a Moore spokesperson described the accusers as “criminals”) and all the time hammering away at his Democratic opponent Doug Jones on abortion.

Moore wants all abortion to be illegal and supports the reversal of Roe v. Wade. Jones has declared he is against “anything that is going to infringe on a woman’s right and her freedom to choose,” but also has said that he supports “current law” that restricts abortion after 20 weeks unless pregnancy threatens the health of the mother.

Moore’s wife has attacked Jones for supporting “full-term” abortion, which is wildly and deliberately misleading. What’s more, the website AL.com reports, “An examination of statistics compiled by the Alabama Department of Public Health shows that late-term procedures are almost nonexistent in the state. Three out of 6,642 abortions performed in Alabama in 2016 occurred after 20 weeks, according to the agency.”

Admittedly, I write all this as one of those Northern media types, but also as one with a Southern mother and at least one great-grandfather from Alabama. Not that it grants me much immunity, if any, from my innate damn Yankee-ness, but I put it out there just to suggest that genetically at least I may not be a total hostage to Eastern seaboard prejudices and pointy-headed intellectualism.

Besides, these symptoms of self-righteous bigotry and callousness hardly are limited to Alabama. This knee-jerk tribal impulse that afflicts so much of the state’s politics is just a pure, concentrated and poisonous microcosm of the Republican Party’s Trumpism, right up to and including the race and gender prejudice, religious bias and sheer chutzpah, although that’s not a word one imagines in Moore’s Jesus-wants-me-for-a-sunbeam vocabulary.

And let’s not forget opportunism. National Republicans pay far more heed to poll numbers than Moore’s Ten Commandments. That’s why we’ve witnessed the appallingly cynical backflips on his behalf from Donald Trump, Senate Majority Leader Mitch McConnell and the Republican National Committee (RNC) as Moore’s percentages seem to have bounced back from an initial drop after the first allegations of his unchristian-like behavior with teenagers.

And so you have a morally compromised president who now shouts “Go get ‘em, Roy,” to a fellow misogynist and birther, as well as an RNC that has resumed cash transfusions for the Moore campaign. You have a woman governor in Alabama, Kay Ivey, who says, “There’s never an excuse for or rationale for sexual misconduct or sexual abuse” but who will vote for Moore anyway because “we need to have a Republican in the United States Senate to… make major decisions.”

Then there’s Tully Borland, philosophy professor at a Baptist university in Arkansas, convolutedly writing in The Federalist that relations between older men and teenage girls are “not without some merit if one wants to raise a large family,” but adding, “Moore was a dirtbag and is currently lying about his actions rather than confessing the truth and asking for forgiveness.” And then adding, “That being said, I don’t think it’s wrong to vote for Moore.” As they used to say on Monty Python, “There! I’ve run rings around you logically.”

No wonder my head hurts. Conservative columnist Jennifer Rubin recently wrote that the GOP contortions are “the final result of years of win-at-all-cost politics in which no evil (Child molestation? Murder?) compares to the ‘evil’ of electing a perfectly competent, patriotic member of the other party to office.”

… Republicans will tell you they support Moore and Trump as vehicles to policy goals. That assumes (falsely) that their policy goals are noble when they are actually unrealistic, unpopular, inconsistent and unconservative… In truth, the goals these Republicans care about, if they ever did, have long ago been sublimated (they certainly changed them entirely) to the goal of holding power, of winning. When that is the highest calling they’ll vote for alleged child predators, racists and just about anyone else with an “R” next to his or her name.

According to Greg Sargent at The Washington Post, Democrats are planning to publicly hold Republicans responsible for supporting Moore. GOP Senate candidates will be asked if they agree with the decision and whether they’re willing to serve with Moore if he wins. Well-clad feet will be held to fires.

But it could be too late. Sargent suggests Trump’s behavior may already have degraded all of our politics beyond the point of no return. And he has given right-wing Republicans the chance they’ve sought for years: trying to gut every social policy achievement of the last eight decades while further enriching the oligarchs (including the Trump clan) as he distracts the rest of us with his unhinged, oafish behavior.

He may be a fool but he’s our fool. Trump and his many accomplices, including and especially Roy Moore, only succeed if we keep letting them.