"Fox & Friends": "It just looks like" the FBI created the Steele dossier 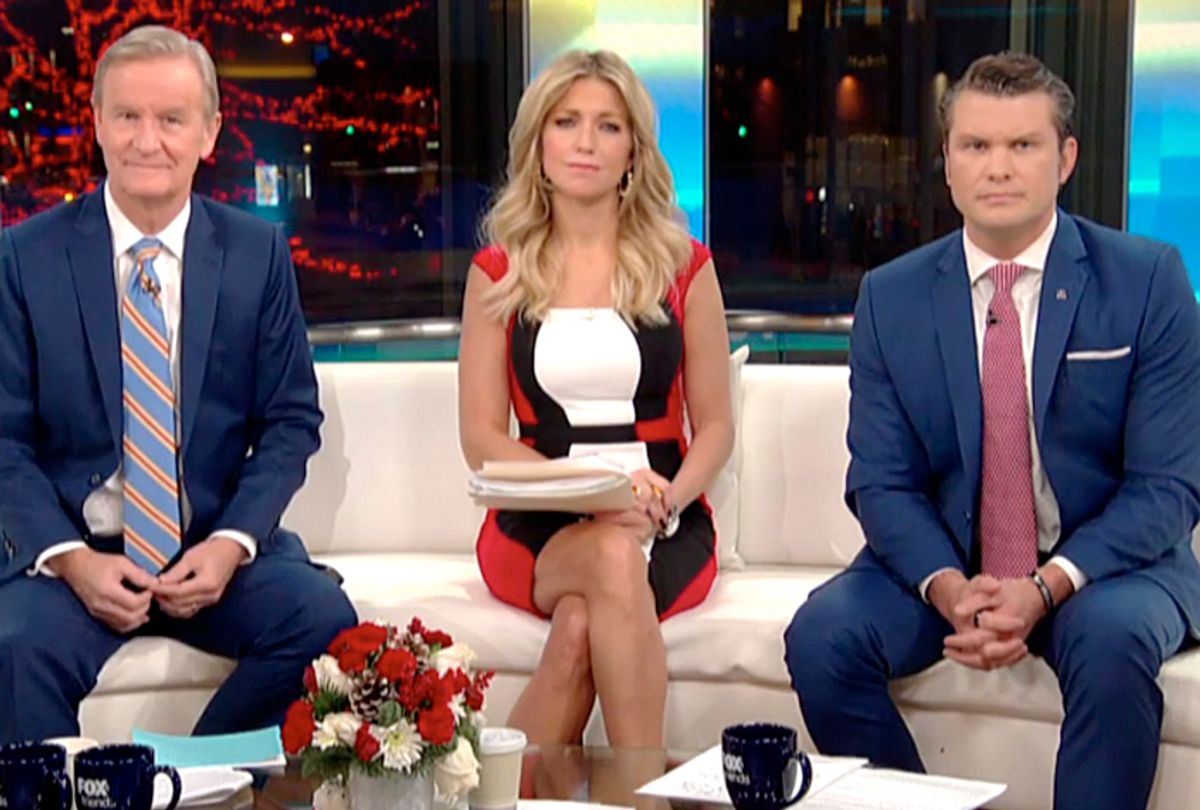 While discussing a congressional hearing on the situation behind the removal of apparently anti-Trump FBI agent Peter Strzok from Robert Mueller's Russia probe on Friday morning, "Fox & Friends" co-host Ainsley Earhardt fell into a brand-new conspiracy rabbit hole by claiming that "it just looks like" the FBI itself may have created the infamous Christopher Steele dossier on the Donald Trump campaign — you know, the one that's rumored to have the infamous pee tape?

As Media Matters reported, Hegseth started out rationally. "It's one thing for the DOJ or the FBI to do their due diligence. Someone shows up with a dossier that may show connections to the Russians, you're going to want to probably look into that a little bit." Yeah, makes sense.

"It's a whole 'nother thing to use it as a justification without any substantiation or very limited substantiation, and then use it to justify potentially spying on Americans, to include wiretapping Trump Tower."

The Steele dossier, while wildly inflammatory and attention grabbing, was not the basis for the investigation of Trump associates that began even before he took office in January of this year. Rather, the various and often public connections between Trump team players — Paul Manafort and Michael Flynn included — to foreign powers such as Turkey, Russia and others, were.

While the FBI has, reportedly, looked into the veracity of the Steele dossier, the Bureau was apparently in possession of it when it began monitoring some communications of some members of the Trump campaign. It was this monitoring that has inspired the spurious allegation that the Obama administration wire-tapped Trump Tower, something the president has alleged via Twitter without providing factual support.

Earhardt did Hegseth one better.

"It just looks shady," she said. "It looks like if, no telling if the FBI was involved in that or if some of these people that had contacts with Christopher, I mean with Christopher Steele."

That statement suggests Earhardt knows little about Steele's career. A former British intelligence officer, Steele had considerable contact with the FBI, particularly when he was investigating the inner workings of FIFA. There is no clear evidence, however, that he had contact with the FBI while creating the Trump dossier.

Earhardt continued, "I don't know if they concocted this whole thing to say let's come up with this dirty dossier so that we can have a reason to spy on the president." She added, "It just looks like that might have happened. It looks shady."

There is no evidence whatsoever that the FBI contracted Steele to develop the dossier or had any hand in its creation.

Following Trump's rise to frontrunner in the GOP race, Fusion GPS then came under contract by the Clinton campaign and the DNC. Subsequently, Steele would share his findings with an FBI agent he knew from the FIFA investigation. Afterwards, he would offer the dossier — either in part or in whole — to various publications. They refused and he continued work on it, though much of its contents were known to the press and Washington insiders.

Ultimately, it would be Senator John McCain who shared elements of the dossier with FBI director James Comey. As it filtered through Congress, it would make its way to President Barack Obama and, eventually, a post on Buzzfeed.

Again, investigations into Trump figures had preceded much of that, not that Earhardt seems to know or care.

Earhardt's comments mark perhaps a highpoint in "Fox & Friends" signaling to the president, who watches the show every day, that the entire investigation into his campaign and cabinet's connections to operatives of the Russian government is a fraud, a witch hunt, that should be shut down, perhaps by firing Mueller.

This is, of course, somewhat of a feedback loop. The Trump camp fights against the investigation, Fox News amplifies parts of that fight; Trump watches Fox News, redoubles his efforts and the cycle continues. Yesterday's hearings were just part and parcel of a coordinated effort by the GOP to paint the FBI as a political tool of either the "deep state," Clinton, Obama or all three.

If the president caught this casual conspiracist nugget on Fox this morning, it should be interesting to see if it resurfaces in this tweets or his team's talking points. Whatever the case, the feedback loop keeps cycling up.