Heavy lies "The Crown": Getting to now from then

Season 2 of the excellent Netflix drama explores the ways that life as a queen, or a princess, is far from a dream 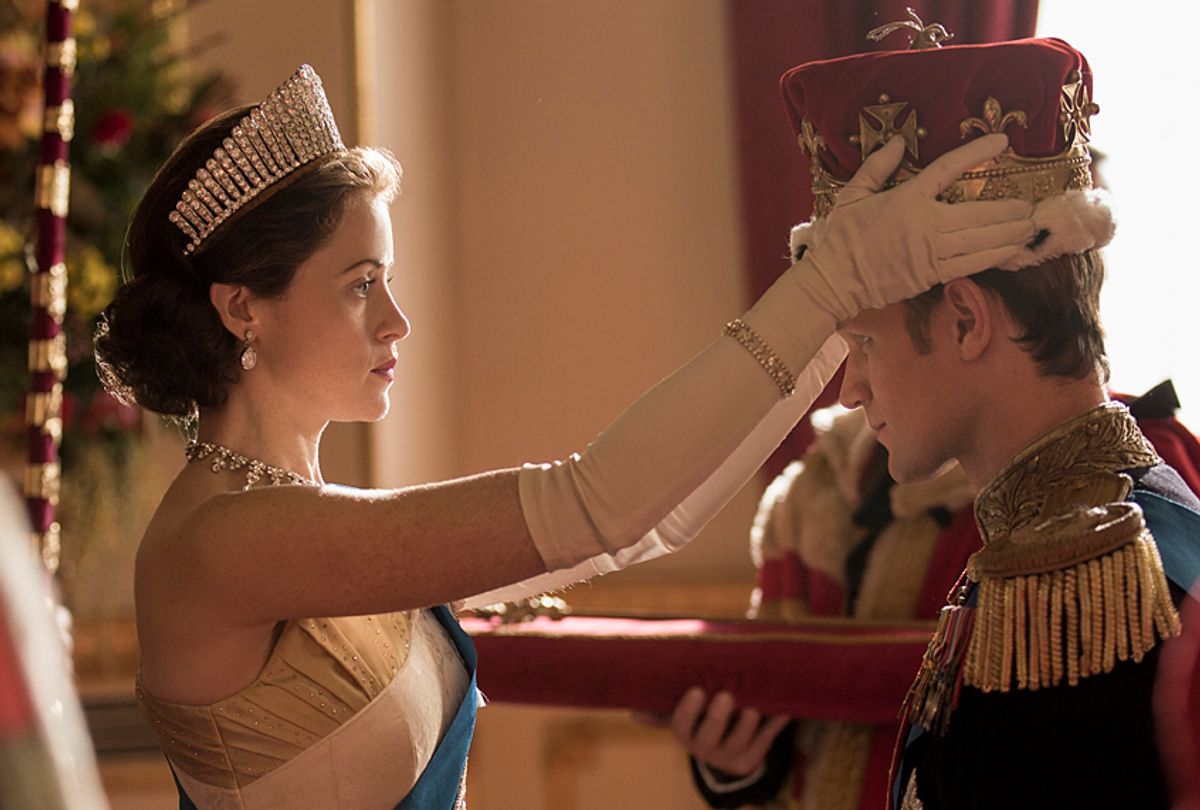 Claire Foy and Matt Smith in "The Crown" (Netflix/Robert Viglasky)
--

By all appearances America and Britain are united in anticipation of what is sure to be the wedding event of 2018, the nuptials of Prince Harry and American actress Meghan Markle. The explosion of coverage that occurred directly in the wake of their engagement has calmed to a low-grade hum, comparatively speaking, as various outlets process the meaning of it all. Why are Americans fascinated with a monarchy representing the very country they revolted against? Should we even care, and if we do, why?

Muted within this discussion is the very real weight the duchess-to-be and His Royal Highness will be taking on. Loving a wedding is easy. Digging into a marriage is decidedly more difficult. Then factor in pressures the average commoner doesn't have to contend with, such as adherence to ancient protocols, dressing the right way, saying the right thing or refraining from comment altogether.

The dream of living a royal's life is mostly just a dream, especially when it comes to balancing matters of state with matters of the human heart. This might as well be the logline for the second season of Netflix's "The Crown," which debuted in its entirety on Friday.

With "The Crown," Netflix and creator Peter Morgan conscientiously depart from the stiff and studied public persona the Windsors carefully cultivated over the years, revealing the humanity and toll of obligation that comes with a symbolic title cemented in place by the collective pride of a nation. Claire Foy personifies that struggle with a balance of dignified stoicism and vulnerability as Queen Elizabeth, a woman pressing on despite the emergence of disruptive political threats in the world beyond the palace walls. The second season contains many such crises, bookending its 10 episodes with the Suez Crisis in 1956 and 1963's Profumo affair, a scandal that threatened to bring down the Windsors as well as tainting the highest ranks of British government.

History is a joining device in "The Crown," of course. The humanity of its players is the primary fascination, beginning with the queen and Prince Philip (Matt Smith) and rippling out from there, from their immediate family through expanded branches of social and political associates. In season 2 this notion culminates as an examination of marriages and relationships both personal and political, making it a handy, digestible how-to for any soon-to-be royal who might want to get an idea of what she's signing up for, or at the very least what outsiders think lies in store for her.

The eighth episode, "Dear Mrs. Kennedy," crystalizes this idea by depicting a socially awkward meeting between Queen Elizabeth and Prince Philip and President John F. Kennedy (Michael C. Hall) and First Lady Jackie Kennedy (Jodi Balfour). Hall's the more recognizable of the two actors, but Balfour's portrayal delivers the harder punch mostly because of what she represents. Elizabeth first sees Jackie in a television broadcast of her visit to Paris; studying Jackie as she speaks perfect French, Elizabeth's aristocratic poker face fails to hide her jealousy of the American woman's stylish elegance.

When the Kennedys visit, despite the best efforts of the royal stylist, and the American couple's embarrassing breach of social protocol, Jackie's modern couture outshines Elizabeth. The queen would hate her except that Jackie candidly admits during a moment when the women are by themselves that the image of the Kennedy White House as America's Camelot is entirely fictional.

"That's the thing about unhappiness," Elizabeth observes long after their meeting (and a tense lunch that follows). "All it takes is for something worse to come along, and you realize it was actually happiness, after all."

Happily ever after is probably more possible for the royals these days than in previous decades, and season 2 of "The Crown" depicts the very human reason as to why this is so. The larger conflict Elizabeth faces is the desire to be both accessible and respected by the public, but all the more so by her own husband.

Foy's Elizabeth has acclimated to being viewed as Elizabeth Regina, putting aside the vestiges of innocence and the shelter of privacy to become the symbol of a nation. Doing so during a period of quickly evolving technology and the rise of celebrity presents challenges her predecessors could not have dreamed of.

As conflict spikes in the Middle East and rumblings in other parts of the world threaten Britain's perceived supremacy on the international stage, the queen is encouraged to remain neutral in her positions. But she's also the figure her public looks to in times of strife, which often leaves her in the position of seeming cold and distant. The risks she takes, such as waltzing with another country's leader — gasp — seem so minor in today's world of lewd gaffes. But as seen in the drama, even the littlest steps, like having a smile of true joy captured in a newspaper photo, serve to melt away the wall between an untouchable monarch and the rest of the world.

One of the best qualities of "The Crown" is the ease with which Morgan weaves between the delicate and brutal politics in which Elizabeth has a stake and the waning sense of the royal family's power and influence as the 20th century progresses. The most effective scenes intertwine the two, such as when Prime Minister Harold Macmillan (Anton Lesser) attempts to use a controversial event as an allegory to express his opinion on the royal marriage. The ever-astute Elizabeth, in turn, cloaks a retort that clearly means he should mind his own business in a generic observation about diplomacy.

Marital strain is as evident in terms of the union between Parliament and Buckingham Palace as it is between Elizabeth and her husband. Philip's envy, seeded in the first season, blossoms in these new episodes as he predictably takes advantage of his position to travel on goodwill tours far and wide, reaping the benefits that come with being the husband of Britain's monarch.

Theirs is but one relationship stretched to nearly snapping — and in fact, compared to the impact their social station has on others, their plight isn't even as miserable as it could be. As hard as their road may be, they're also restricted from taking the exit available to many others, as Elizabeth points out in a contentious moment as the season starts. Others, including her sister Princess Margaret (Vanessa Kirby), are trapped by barriers that all but ensure their unhappiness.

Macmillan and his predecessor Anthony Eden (Jeremy Northam), too, cannot emerge from under the weighty legacy of Winston Churchill. But Macmillan's situation is rife with pathos, since he struggles for respect within his government and in his own home. Not even his wife can see fit to grant him emotional quarter.

And there's more bitter than sweet in this season, to be certain; that doesn't sour the story, however, which speaks to Morgan's skill in building the story and the history, which he strengthens by making season 2 more of an ensemble piece and less reliant on Foy, who exits the series after this round of episodes to make way for Olivia Colman to portray Queen Elizabeth's middle years.

At the end of the season Elizabeth points out how little time has passed in these two seasons of "The Crown" — a little more than a decade, she reminds Macmillan irritably, adding that in that time she's remained while he and his predecessors have seen fit to abandon her. "A confederacy of elected quitters," she dubs them.

No such luxury is available to Elizabeth, and she knows it.  She may not have spoken the words "'Til death do us part" upon her ascension to the throne but it's the truest relationship within "The Crown," that of duty and the figure upon whose shoulders it rests. Being queen is no fairy tale, but because of Queen Elizabeth's will, maybe life -- and marriage -- will be less constrictive for a thoroughly modern royal.